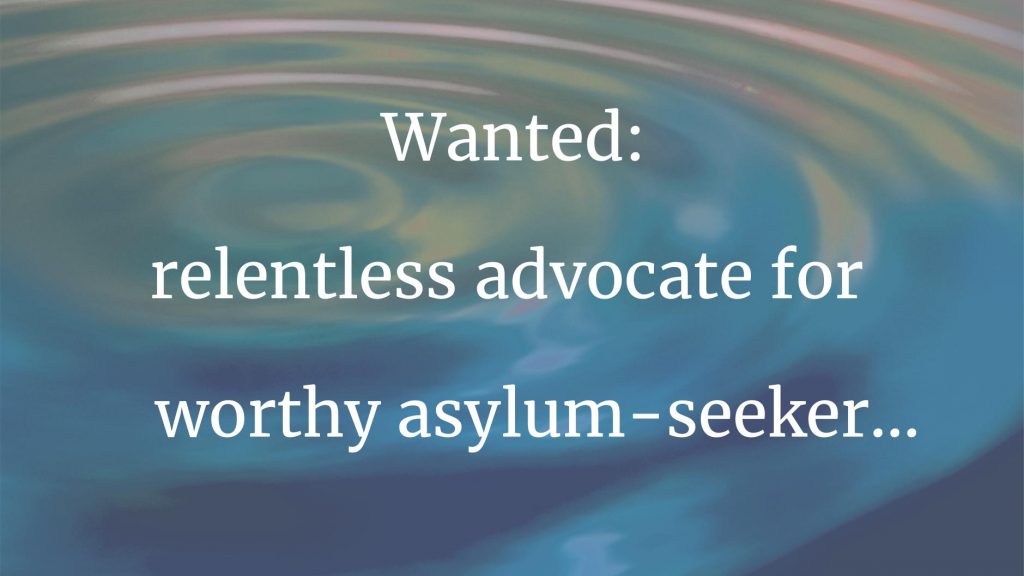 As a third-year medical student midway through a family-medicine rotation, I’m supervised by a family physician in several free clinics in our large city.

On Fridays, we run a clinic for torture victims who’ve left their home countries to seek asylum in the US. I’ve been following a new patient, Julian, an African refugee.

Julian is a small, thin man in his early thirties. His large eyes, shy smile and soft voice belie the determination and resilience evident in his story.

In Africa, he was a nurse–and a political organizer fighting for a less corrupt, more democratic system. He was imprisoned and tortured often. The last time, a sympathetic guard let him escape, warning that he’d be killed if captured again. Julian fled to South America, then headed north, traveling by foot, car and train–and once by hot-air balloon! Caught at the US border, he was held in an ICE detention center for a year before being let into the country.

…And one week ago, my preceptor had to tell him that he has HIV.

Today, Julian has come for his first appointment at the HIV clinic, and I’m helping him navigate the process.

The first step is a large stack of intake paperwork. Since Julian is unemployed, he must fill out extra forms to get financial aid for treatment and medications. Although Julian speaks English fluently, both he and I find the forms’ legalese baffling in spots.

We go to the clinic’s financial coordinator, who is fantastically patient and helpful. Even so, I have to keep asking questions so I can help Julian to understand what he’s signing.

Back in the waiting room, we learn that today’s appointment is for lab tests only, not a full intake exam.

I approach the front desk.

“Julian is an asylum seeker,” I tell the clerk quietly. “He doesn’t know how long he’s been infected. Is there any way he can have a full intake today, so that he can start his medications?”

The clerk goes to check, then returns and says, “In a half-hour we can fit him in.”

Gratefully, I head back to tell Julian. As we wait, he turns to me.

I’m startled. When my preceptor gave Julian his diagnosis last week, she told him that, with proper treatment, his prognosis is great.

Now I realize that, like many patients, Julian had been unable to process anything beyond the basic fact of his diagnosis.

“With treatment, most people live long, full lives,” I say reassuringly. “If you take your medications, nothing in your medical history shows that your life would be shortened.”

He takes my hand in a gesture of friendship, then nods. But he still looks nervous.

“Will I ever be able to make children of my own?”

“HIV doesn’t prevent you from having children,” I say. “You need to be careful not to pass it to your partner or child. But medication can help….Would you like to talk to the doctor about that?”

“No…I’m scared. I don’t want anyone to know. I live with my dad and my brother and his wife. If they knew, they would never talk to me again. Kick me out,” Julian says, squeezing my hand tightly and staring at the ground.

“With medication, you have a very, very low chance of passing it to them,” I answer. “You will not put them in danger by sharing a space with them, so you can keep your diagnosis private, if you wish.”

“Thank you,” he says, still looking down. “But my brother’s wife…I know she will look through my papers and medications. And it’s her house, so I cannot stop her.”

I think for a moment. “We can remove any papers you don’t need that might give away the diagnosis. If some papers have your diagnosis, and you need to keep them, maybe you can fold them up small and hide them?”

Visibly relieved, Julian smiles and nods. We pick through his papers. When he’s called in to see the doctor, he asks me to join him.

Dr. Green greets us warmly. We learn that Julian’s medical records, supposedly transferred from the other clinic, haven’t arrived.

“This sometimes happens,” Dr. Green reassures him. “Why did you visit the first clinic, Julian, and how long have you known your diagnosis?”

Julian is so nervous that his hands shake. He struggles to summarize his medical history, so I provide it. Dr. Green examines Julian and gives him the medical information he needs, making sure that he understands everything.

Wrapping up, Dr. Green says, “I’ll prescribe you some medication that you can start taking today. You can pick it up at the pharmacy on the other side of the clinic. Before leaving, you’ll have blood drawn, so we can see how well your body is fighting the infection. I will see you back here in one month.”

We thank Dr. Green and leave. Julian has his blood drawn, then we go to the pharmacy’s service window.

“I’m sorry, there are no medications for you,” says the pharmacist. “You can come back tomorrow or the next day to pick them up.”

He turns to leave–but I stay put, thinking: They’re probably just not in the computer system yet. And Julian took three separate buses to get here today.

Catching the pharmacist’s eye, I say, “Dr. Green told us the medication would be ready today. Would you mind double-checking?”

She goes to check, then returns. “He forgot to approve the medications in the system. They’ll be ready soon.”

As we wait, Julian has a hopeful smile on his face.

“I am glad that Dr. Green is my doctor,” he says. “I am starting to feel safe now that I will be starting medication.”

When he’s called to the window, a nice young pharm student dispenses his medication–in bottles whose labeling clearly indicates his diagnosis.

“Are there more discreet labels you could use?” I ask her. “Julian is concerned about confidentiality.”

“I completely understand,” she says, smiling. “That’s a common request.”

She disappears into the back, returns and hands Julian some plain packages. He and I take the elevator to the lobby and prepare to part ways.

“I am so thankful that you were with me today,” he says, shaking my hand. “I was scared to come, but I am now much more hopeful about my future. I feel like my life has been restored to me.”

He hugs me and exits, looking back to give me a huge smile–the smile of a man who’s just gotten his life back.

I stand there, recalling the series of obstacles Julian faced during his visit. Any one of them could have derailed his efforts to get treatment, if he hadn’t had someone to advocate for him.

What if he didn’t have help? I wonder. Could he have obtained financial aid? Would he have waited a week or more to be examined, or to get his medications? Would he have been outed to his family? Kicked out to live on the street?

Heading back to the waiting room, I reflect that so many patients in our healthcare system have stories similar to Julian’s. Like him, they face countless barriers, large and small, that can prevent them from getting care.

I look around at the people waiting and wonder how many of them will be stopped by a barrier today.

Patrick Sammons is in his last year at the Keck School of Medicine of the University of Southern California. He will apply to emergency-medicine residencies this fall. His interests lie in global emergency medicine and using innovation and design to increase access to quality healthcare worldwide. “I’ve never really seen myself as a writer. In my younger years, I dreaded reading and never did any writing unless it was strictly necessary. In my mid-twenties, though, I started reading books that paired with my interests, and this snowballed into reading a new book every week. Reading showed me the value of writing, both as a creative pursuit and as a way of expressing ideas, and I hope to continue to develop as a writer.”