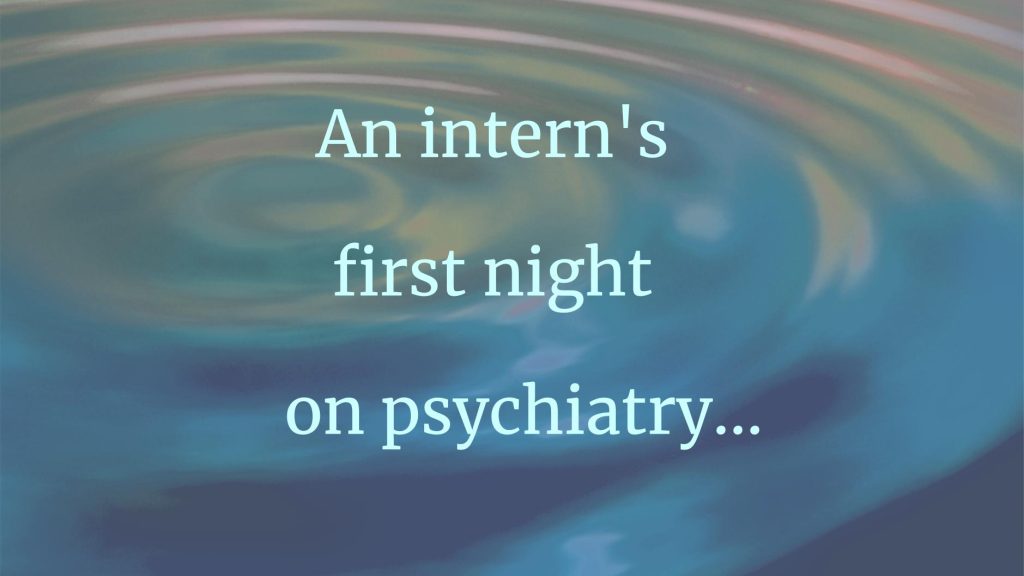 It was my very first day of psychiatry rotation in my family-medicine residency at the Baylor College of Medicine, Houston.

This rotation took place at the old Ben Taub Hospital with its unmistakable odor–a combination of drugs, detergents, illness and death. Even if I were taken there blindfolded, one sniff would tell me that I was at Ben Taub.

At any rate, having survived my first seven months of residency, I was feeling a little more confident in my abilities.

I was one of the two interns on the psych unit, and we were supervised by a third-year resident named John. Our attending, Dr. Old, was actually relatively young; and I’d heard that he was tough on residents.

“Stay prepared,” John told us. “He likes pimping us”—torturing residents with rapid-fire difficult questions. Dr. Old wanted us to give every psych patient routine lab tests, hoping to find a medical reason to transfer the patients to medicine ward, which enabled the psych physicians to assume a less demanding consulting role.

As luck would have it, I was assigned to take call that first night. At about 7 pm, John said, “I’m going to the sleeping room. Page me if you need to.”

In seven months of residency, I’d learned that it was ill advised to call the supervising resident–and absolutely off limits to call the attending. The ethos was that handling difficult cases on your own builds character, even if you’re a naïve, terrified first-year resident.

I sat and chatted with three psych nurses in the quiet nursing station. One crucial thing I’d learned in residency was that at the worst, most grueling times, the nurses could be your best friends and support, so I wanted to get to know them.

“It’s awfully quiet here,” I said to nurse Jane. “Is it normally this quiet?”

She glared at me. “Now you’ve jinxed it!” she said. “You’ll see what happens.”

She was right: Soon our small talk was interrupted by a commotion in the hallway outside. The door burst open, and two psych technicians dragged in a very large man, who was screaming nonstop. He looked about six-foot-four, red-eyed, muscular–and clearly enraged.

As the techs took him past us on their way to a patient solitary room, I made out his words:

The techs slammed the door of his room, then walked away, clearly feeling that their job was done. Watching them go, I could hear the man shouting from behind the door. As I contemplated what to do, nurse Karen smiled sweetly.

“Aren’t you going to see this patient?” she asked. The other nurses were smiling too, obviously enjoying this new intern’s predicament.

“I’m thinking,” I said. I needed to calm the patient down; but I also needed to get his medical history and lab results before giving him any meds.

In those days, the Baylor residents had to draw patients’ blood themselves, label the tubes and hand-carry them to the lab. My first problem was how to approach this screaming messiah and draw his blood.

I debated calling John, but decided to try something first.

I gathered up the box with tubes, tourniquets, syringes, needles, Band-Aids and alcohol swabs and started toward the man’s room. In the nurses’ eyes, I saw alarm for my safety mingled with amusement at my plight.

I opened the door. The man sat at the edge of the bed. He looked smaller. Except for his bloodshot eyes, he looked calm and collected. Even though he believed that he was a messiah, I felt I could connect with him on a human level.

“If you’ll allow me, I’d like to ask you a few questions.”

“How are you feeling today?”

“Have you heard voices before?”

“Yes, for many years. But more voices this week.”

“Where are the voices coming from?”

“What do the voices say?”

“Many things.” He paused and seemed to withdraw into himself.

“Do you take any medicine?”

“Have you been taking it?”

“I have a very important request,” I said, trying to quell my anxiety. “I need some blood for a ritual here tonight. It would be great to get blood from a messiah. Would you kindly give me a few tubes of blood?”

He immediately extended his arm. To my delight, his veins were very prominent.

Swiftly, I put the tourniquet on his arm and drew several tubes of blood.

After thanking him, I walked out triumphantly to the waiting nurses. When I described how I got the blood, they laughed out loud.

“Did you get his urine?” one asked.

I picked up a urine cup and went back into the man’s room.

He stood up and started to unzip his pants. Before he could take them down, I stopped him and walked him to the urinal, then returned to the nurses, carrying the sample.

About an hour later John walked in, and the nurses gleefully related how I’d obtained the patient’s blood and urine. Studying John’s serious, somewhat depressed demeanor, I found it hard to gauge his response.

John examined the man, suggested some injections and left without saying a word about the tactics I’d used.

I accompanied nurse Jane to the patient’s room, and she gave him the injection, which he accepted peaceably.

Pondering John’s silence, I started to worry that he didn’t approve of my handling of the patient. The internship year is stressful, and as an international medical graduate I felt especially apprehensive; I couldn’t afford to fail this rotation.

The next morning Dr. Old came in for rounds. As we approached Messiah’s bed, my heart started pounding. He was deeply asleep. I gave the morning report and the lab results, which showed multiple illicit drugs in his system. At this point, John recounted how I’d gotten the patient’s blood and urine.

I eyed Dr. Old anxiously, feeling a little guilty. He looked back at me.

After rounds, I went back to see the patient again. He was still in a deep messianic slumber.

Silently, I offered him my apologies—and my gratitude. Thanks to him, I’d passed this rotation on the very first day. In my heart, I knew that a messiah wouldn’t hold it against me for deceiving him; he’d probably rather pray for my soul instead.

Over the next couple of days, I got to know the man a little more. With his medications working well, our conversations were fairly normal, even friendly. In the back of my mind, I worried that he’d ask me about the ritual that I’d mentioned, and whether I had proven that he was indeed a messiah. Much to my relief, he never did.

This experience confirmed for me that connecting respectfully with another person, whether human or messiah, is the most critical skill for a physician–and also that the art of medicine is a little harder to learn than the science of medicine.

Syed M. Ahmed is a professor emeritus of family and community medicine at the Medical College of Wisconsin (MCW), Milwaukee, where he was the inaugural associate provost and senior associate dean for community engagement. “I have written and published stories and poems in Bengali, but only a few in English. My lame excuse is that I don’t have enough time to write, as I am enjoying my retirement. I have a collection of ideas for stories like this one, based on thirty-plus years of clinical practice, waiting to be written.”

PrevPreviousWhy Isn’t He Listening?
NextRoom 103Next

28 thoughts on “Treating a Messiah”