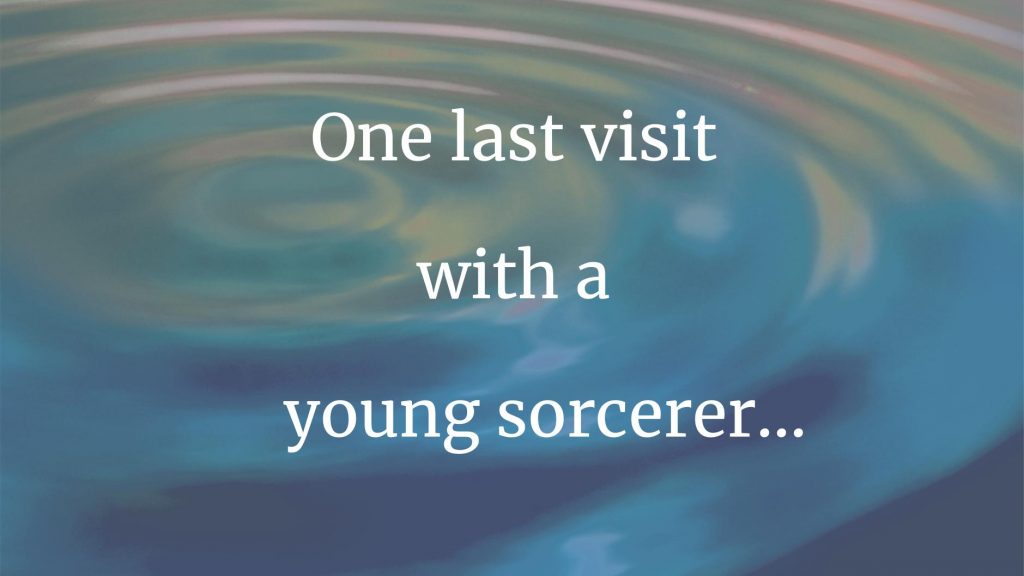 He’s wearing a Yankees T-shirt, an EpiPen holstered to his belt like a lightsaber. We’re old friends. Trevor has been my patient for four years—more than half his life.

This will be our last visit: After forty years, I’m retiring.

In the late 1970s, when I first entered the medical profession, as a nurse, my uniform was a starched white cap. In those days, the nurses’ notes were color-coded ink: blue for the day shift, green for the evening and red for the night shift.

Years later, when I became a physician, my blue scrubs identified me as an internal-medicine resident. I charted the patient’s history, physical and daily progress in blue ink.

Next came a laptop instead of a pen. Nowadays, as an allergist in a group medical practice, I’m no longer in uniform: A white coat would frighten the children.

This morning, when I saw six-year-old Trevor on my schedule, I fastened a fossil brooch to my lapel. I know he’ll like it, and he does.

“That’s a brachiopod,” he says, smiling. I remove it from my jacket and let him hold it. He turns it over in his hands and examines it. Satisfied that it’s the real thing, he hands it back to me.

Trevor’s mom lets him do most of the talking during our time today. She projects a calm, casual attitude, but I know that she struggles to manage her fear of the ever-present dangers in her son’s world—his potential exposure to peanuts at school cafeterias, fast-food restaurants, Cub Scout camping trips or birthday parties.

Trevor’s physical exam is unremarkable. He’s relieved that no shots or allergy tests are necessary today. The three of us discuss new treatments for his peanut allergy. And I explain that the new physician will take over his care.

I print the Food Allergy Action Plan forms that every school now requires, but I leave the rest of the charting to do from my desk. Rather than clumsily trying to point and click all the boxes during my time with the patient, I prefer to input data in the chart after the patient leaves. I am old school and slow to adapt to the new electronic medical record; it’s something I won’t miss about my job.

But I will miss the challenge—the intellectual and emotional aspect of patient care that is sometimes difficult, but usually rewarding. I will miss the team of nurses, physicians and office staff who make me look better than I am.

I will miss being useful.

And I’ll miss my evening drives home on the Skyway over Lake Erie, during which I decompress and think about the sweet moments of the day.

As we prepare to say our goodbyes, Trevor fiddles with his mom’s bag. Then, from behind his back, he brings forth a long, smooth, slightly crooked twig. He presents it to me with the slight formality of a six-year-old boy king.

Taking the twig in my hand, I’m puzzled, but I don’t admit that I’m wondering what the heck this thing is. Fortunately, I don’t commit the faux pas of calling it a “stick.”

A small branch, perhaps a sycamore, zigzagged like a lightning bolt, it’s about eighteen inches long, with a slightly gnarled tip at the business end. (How I know which is the business end I can’t explain, but it’s obvious.)

I resist my dopey inclination to start swinging it about willy-nilly or pronouncing cartoonish phrases like “abracadabra” or “presto.”

Trevor knows his way around my exam room; he goes to the counter and grabs a tongue depressor to demonstrate how to hold a wand correctly. He shows me how to cast a spell with a flick of the wrist, “like a fishing rod.” He doesn’t want me to practice this with the wand itself—”It is very, very powerful”—and emphasizes that it should not be used for just any little thing. I vow that I will save it for essential matters only.

“I can tell that it’s special,” I say. “I haven’t seen many wands in this part of the country.”

Catching me in an exaggeration, he asks, “Have you ever seen a wand?”

He seems most excited about the serendipity of finding this magic in my parking lot only thirty minutes ago, on the way into the office!

“I wonder if you found the wand, or the wand found you,” I say. The smile on his face tells me he likes that possibility.

He lets me hug him, and the three of us say our goodbyes.

At the checkout desk, Trevor chooses a sticker from the treat basket. He picks a glittery one to take home to his sister—bluebirds dressing Cinderella.

“My little sister likes sparkles and princesses,” he tells the nurse.

After Trevor and his mother leave, I sit at the computer and update his chart. I input each data point. One. After. Another.

The point-and-click review of systems and physical exam are recorded. Prescriptions are transmitted to the pharmacy, electronic-record releases are sent, a digital Food Allergy Action Plan is forwarded to his school nurse and the appointment reminder is scheduled in the electronic chart. After I input the diagnosis codes and billing codes, the computer screen confirms “Encounter is complete.”

At Trevor’s next visit, a new allergist will review his data. I sincerely hope that my successor will discover facts that can’t be documented in an electronic record:

Trevor learned to read before kindergarten.

He can identify the Big Dipper and Orion’s Belt.

He is kind to his little sister.

He is a wizard.

Rita Sloan, an allergist from Buffalo, NY, retired from a multi-specialty group practice in 2017. “Interactions with patients and their families have been one of the rewarding aspects of my working life. I’ve been interested in writing creative nonfiction for some time, but during my working years, I didn’t feel that I had the energy to write creatively. Since retirement, however, I’ve had time to read for pleasure and participate in writing workshops. I now appreciate the luxury and freedom of time to develop the skills required to create something on the page.”