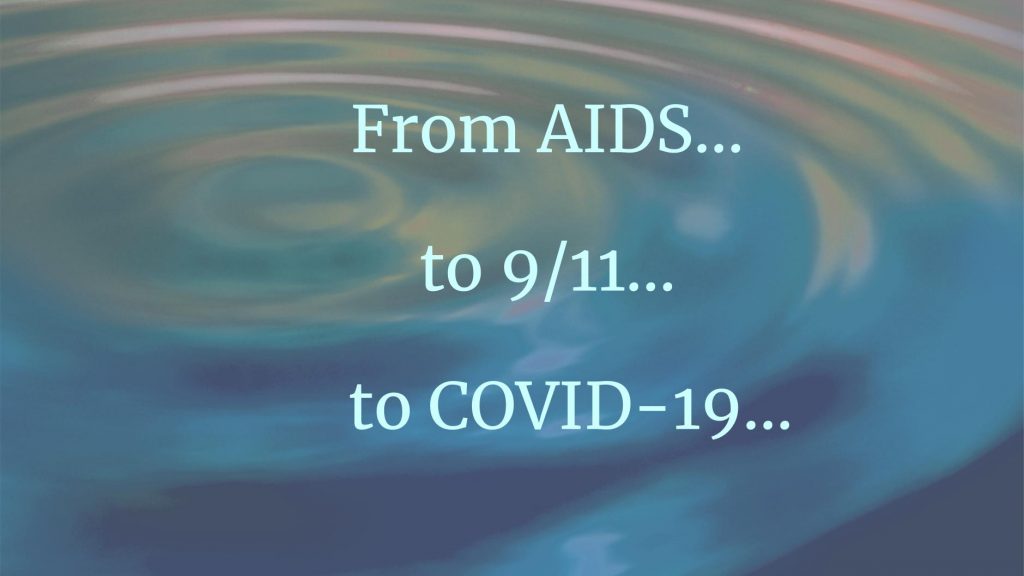 It is day 30+ of New York City’s COVID-19 pandemic. Fire trucks and flashing lights fill the street fronting the hospital emergency department where I’m a physician. The scene erupts into applause and sirens. We doctors, nurses, physician assistants, techs, housekeepers and clerks wave back and flash our individual cardboard letters spelling “Thank You!” It is so good to be outside and, for a few minutes, unafraid. Inside, our ER break room overflows with donated pizzas and pastries. Later we will take cartloads of these up to the jam-packed ICU and medicine floors.

The virus has the world by the throat, and New York City is the epicenter. None of us has ever seen this much death. But all hearts are beating together.

It’s not my first pandemic. On 9/11, I was the doctor on duty in this same ER, five blocks from the World Trade Center. For anyone who thinks hospitals stood empty that day, I have a story for you of mayhem and carnage and medical derring-do. But this story isn’t about 9/11–except in the sense that the aftermath of that day gave me a glimpse of what a new world might look like.
This story is mostly about 1981.
Now, while squinting through my goggles at the flashing red lights and hoorahing firefighters, I recall that year–my third year of medical school. My clinical rotations at Bellevue Hospital had started that fall.
Odd lung infections and rare cancers were cropping up in young gay men. The eighth case in New York City was my patient, a young Colombian man named Adrian whose mother rarely left his side.
My professors had nothing to offer. We called the disease GRID: Gay-Related Immune Deficiency. At first no one thought it was infectious; we clinical clerks–true Bellevue scutdogs–prided ourselves on our blood-drawing and IV-starting skills. Gloves made it hard to feel veins, so we rarely bothered with them.
Adrian, reduced to Buchenwald-like emaciation, died two weeks after being admitted. I promised his mother that we would find out what had killed him. In the autopsy room, as the pathologist cut open his rag-doll body, she caught the look of despairing uselessness on my face and gently urged me away.
Autopsies did not reveal what caused GRID, but we soon realized that its pattern of spread behaved like Hepatitis B, a virus–so it was contagious. Overnight, patients were isolated, protective gear flew on, and the dying were shunned. I once begged a hospital TV repairman to go into a room and reconnect a dying patient’s only outlet to the world.
“I ain’t going in there,” he declared.
“But I go in there,” I said.
“Yeah, but you’re immune. You’re a doctor.”
By mid-1982, doomed AIDS patients crowded Bellevue’s wards. The scutdogs kept at it. The still-unnamed virus, we gingerly discovered, wasn’t as contagious as Hep B and, unlike present-day COVID-19, was transmitted only by sex or blood, not by casual contact.
But that didn’t stop the world from declaring AIDS patients to be lepers–from shrieking at and banning hemophiliac schoolchildren from classrooms. At its peak, AIDS killed 50,000 Americans a year. AIDS drove doctors away and rendered suspect those with guts enough to lay on hands.
In the time of AIDS, there were no firefighters clapping outside Bellevue, no stacks of pizzas in our break rooms.
Last Sunday, as New York’s death toll mushroomed, another generation of firefighters–perhaps reflecting their own recent history–reaffirmed for me the astonishing human capacity for solidarity and kindness that was so absent in the 1980s.
Which brings me back to 9/11. Late the next day, still stunned, I watched citizens keeping vigil around the world and lighting candles for America, and I thought the world was now one: “We are all Americans.”
New York City, my city, became all tenderness. Over the days that followed, the families of the dead glided by the hospital, softly asking to post portraits of their lost ones. Subway cars felt like holy places, requiems for the missing. Oklahoma City sent a van of teddy bears–something–because they understood. Even Iran voiced its sorrow.
We Americans had the chance to help create a new world guided by compassion, kept rigorous by science.
And then we squandered our opportunity–by fabricating lies and launching a war that spawned a fresh generation of America-haters.
Now we face the COVID-19 pandemic–a crisis made worse by leaders who suppress the truth or ignore science, and by tribalism that blinds us to other countries’ experiences and expertise.
This time must be different. Our compassion must extend to every human being on this planet. There can be no more leper colonies, no more forgotten tenderness, no more unlearned lessons, no more “others.”
We are all in this together. From now on, we must be our best selves.

Tony Dajer, an assistant professor of emergency medicine at Weill-Cornell Medical College in New York City, was born in New York and grew up in Puerto Rico. “My dad is Nicaraguan; my mom is a New Yorker. I like travel and history, and boy, do I love skiing and scuba diving. In 1986-87, I worked for eight months in Nicaragua and wrote a book about it to try to convince Americans that we should stop the Contra War. The book never got published, but a serendipitous sequence–a friend showed it to a friend–led to my writing for Discover magazine’s ‘Vital Signs’ column. Writing helps me to see where I’ve been, but it doesn’t come easily. I do think it makes me a better doctor.”

14 thoughts on “The Last Pandemic”