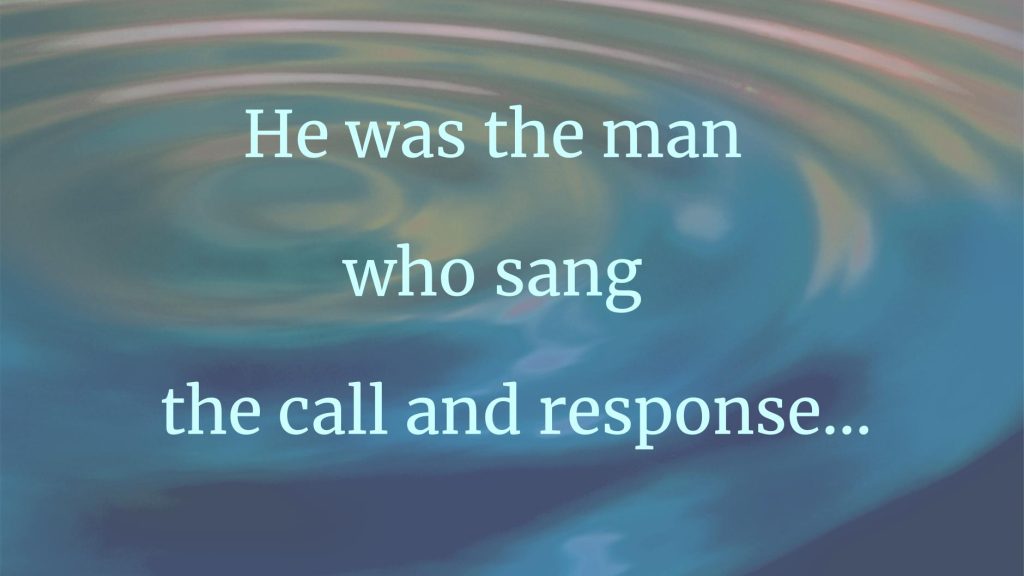 After I retired, my wife and I moved, giving me a reason to go through my old files. I found the notes from this story scribbled on some scrap paper that used to be everywhere in our offices. “Keep good notes,” someone once advised me. These are good notes and a good story.

Thirty-five years ago I was on the faculty at the University of North Carolina in Chapel Hill and spent a lot of time traveling around the state. Mostly, I drove alone—a pleasure I felt I deserved after a busy week filled with people. Frequently I’d take three hours for a two-hour drive, stopping in little towns and maybe trying the local barbecue. I was a Great Plains Midwesterner, familiar with distant horizons and big skies, and didn’t know much about the South, either the people or the terrain. Driving around helped.

Once a month, I went to a student-volunteer clinic in rural Eastern Carolina, a few hours from where I lived.

On a summer Saturday, a patient there, a tall older Black man wearing a white cowboy hat, had been seen. His chest film showed a large, worrisome mass. Arrangements had been made to admit him to a teaching hospital near Chapel Hill. Since he had no transportation, the staff asked if I would take him back with me. As we headed out, he began to talk.

He was born in Florida in 1923 and remembered that his father had one of the first Model Ts in the state. His father had to wind it up to start it, and his father kept driving it into ditches and finally gave it away. He and his father and brothers hitchhiked and rode the rails to South Central Florida to work in the turpentine camps. They lugged buckets from the trees to the copper stills. At the end of the day, the creosote from the distillation process peeled off his face “like an onion.” He and his brothers also planted crops for 15 cents a day each. They earned enough to buy beans, cornmeal, bacon fat and chicken on Sunday–he laughed as he said that he and his brothers thought that a chicken had only a neck and two feet.

After a few years, he got tired of the turpentine and walked away down the rails looking for work. He got jobs that took him to West Texas, Missouri and Kansas, living in shacks and boxcars. In 1938 he went back to Florida. He got a job with the railroad and by 1947 was promoted to gandy dancer.

My own grandfather was a railroad engineer in the 1920s, and he knew gandy dancers. They were crews of men, four to a team, two teams to a rail, whose job was to lay and maintain track. Each man used a five-foot iron bar (a “gandy”) to lift and move rails back into alignment after the wear and tear of heavy train wheels.

He worked on the Florida Seaboard Railway, and on a good day they could lay three miles of rail. Gandy dancers laid tens of thousands of miles of track in the largest network of railroads in the world. They were also instrumental in creating a branch of American music that was talked/sung to a regular beat. They mostly came from immigrant groups—Chinese in the West, southern Europeans in the Northeast. Crews in the South were African-Americans. Gandy dancers disappeared in the early 1950s, replaced by machines.

After losing his job in 1953 he met a woman from South Florida, and they moved to Orlando, where he was a roofer by day and scrubbed stoves and floors at a Morrison’s cafeteria at night. He got three hours of sleep, but managed to buy a car and a refrigerator and wanted to buy a home. Suddenly his wife said she wanted to move to Georgia and took everything and drove away. He never saw her again.

He worked for a few months, but got downhearted, moved to South Florida and worked on a shrimp boat for a few years. He ended up as a migrant worker near the Everglades, where Big Ag treated him like a slave and charged him double for everything. Eventually he ran away and came to North Carolina, where he now lived with an older lady who fed him. His money was running out; his cataracts were bad, so he could barely see.

We rolled in my VW van down the two-lane highway, him telling me his story and occasionally singing and laughing at the things he remembered. We finally pulled up to the University Hospital admissions entrance. He put on his cowboy hat, thanked me and walked inside.

A couple of days later, I went to the hospital to see how he was doing. I looked at his admission note, which read, in part: “A 64yo black male with a pulmonary nodule, admitted to rule out ca. Social history: migrant worker originally from Florida. Family history non-contributory.”

It didn’t surprise me, but I wanted to find the admitting team and let them know that their note wasn’t even close. This man had lived a remarkable life, full of pain and resilience and abandonment and redemption. This man had lived in the terrible, remote area of South Florida migrant workers that Zora Neale Hurston wrote about in Their Eyes Were Watching God. This man was one of the last gandy dancers. Did they even try to find out?

Of course I knew the answer. If I had been his hospital attending, I’m not sure whether I would have sat and listened to the story either–or if he would have told me. We would have had the workup to do—get bloodwork, CT scan, pulmonary consult and a treatment plan. Only touch on the history relevant to the problem. He wanted to leave. They wanted him to leave as well.

In my practice, I heard about lives that could have been the stuff of novels, but instead became stories I told to my colleagues and family. I took care of a 100-year-old man who had been a cabin boy on a whaling ship in the Pacific. I took care of the greatest blues pianist, ever. I took care of a Nobel Prize-winning writer; I took care of someone who fought in the Spanish Civil War as a member of the Abraham Lincoln Brigade. I took care of people who let me enter into their vulnerable, dramatic, exciting, mundane lives and trusted that I would use what they told me to help them. It is the gift of medicine–the stories and the trust that comes with them.

So what keeps doctors from finding out who patients are; from “gaining entrance to the secret gardens of the self,” as William Carlos Williams wrote?

People quickly mention time, but that is not the reason. It is something else. We may be reluctant to go through the doors our patients open for us because we might find out something about ourselves in the process—come face to face with our own vulnerabilities, our inadequacies and our failures. Not going through those doors, though, robs us of the richness of our profession, reducing medicine to formulaic work without insight into others’ humanity or our own.

So it seems that the least we can do for our patients and ourselves is to listen. Perhaps it is also, in the end, the most we can do.

John Frey is a family doctor and teacher, now retired, but not really. He is an emeritus professor in the department of family medicine and community health at the University of Wisconsin—Madison. “I have been writing essays and stories during most of my fifty years in medicine—for myself, for others—as a way of trying to understand my work and the extraordinary lives I have had the privilege of seeing.”

20 thoughts on “The Last Gandy Dancer”