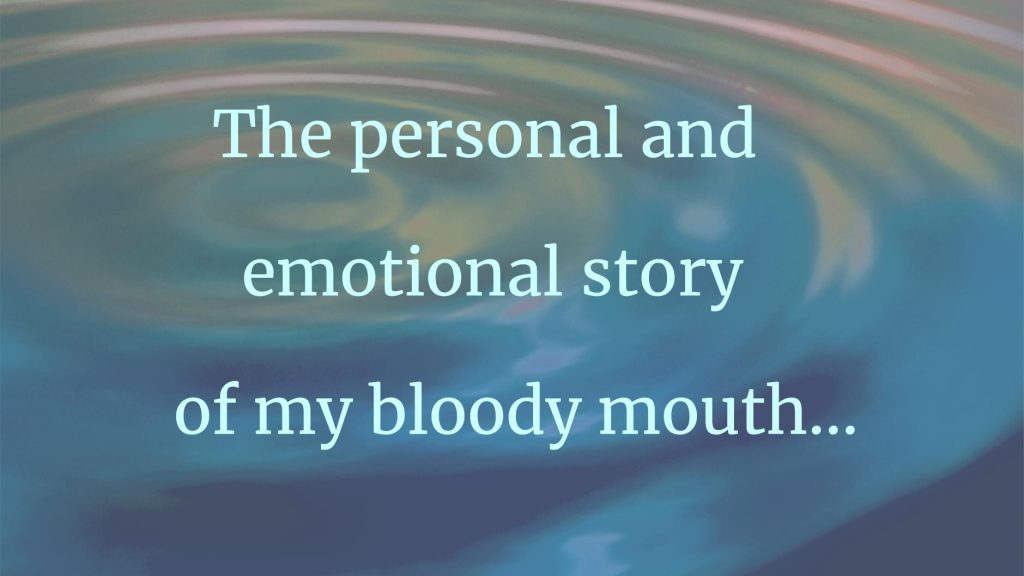 When I was five years old, more than sixty years ago, I was playing on the top rung of a swimming-pool ladder near our home in what was then Salisbury, Rhodesia (now Harare, Zimbabwe). I lost my footing.

Being very thin, I slipped between the pool ladder and the wall and knocked my chin hard as I fell. Just as in the film Jaws, the blue water (acrid with pool chemicals) bloomed red.

I was rushed to the dentist’s office, where he extracted seven teeth that had been shaken from their sockets. Luckily, these were all milk teeth, but the dentist warned that I would have an oddly shaped mouth, with the new teeth growing in at bizarre angles.

My teenage years were punctuated by visits to the orthodontist. I was told that I was the first child in South Africa to wear the orthodontic headgear needed to pull my jaws into shape. At boarding school, this made me even more of an oddity than I was already.

I was an awkward adolescent, thin and unathletic, with a constantly runny nose due to undiagnosed allergies. The last thing I needed was the pain–personal and social–of this prosthesis. As I write this, I run my tongue over the deep groove in the side of my mouth where, years ago, the headgear created a large, blistered valley. The blisters hurt then, and I’m reminded of the pain now.

Not long after my childhood dentist helped me so kindly with the extractions and with numerous follow-up appointments to see how I was doing, he was found dead in his surgery. Unusually for dentists in those days, he was known throughout our small city as a specialist children’s dentist–exceptionally kind to children and good at managing their anxiety. Children loved him, their parents loved him. His suicide came as a shock to our small community. But whatever had led to his death, he was gone, and we had to find someone else to tend to my oddly shaped mouth.

When I moved to Cape Town as an adult, I found a similarly kind and competent dentist, who one day unexpectedly died of a heart attack. My next dentist died a few years later of cancer. What was it with this unruly mouth of mine that led, I couldn’t help feeling, to death and destruction? My gums gave me no trouble, but somehow I felt that my mouth was dangerous and destructive.

Years later, at the start of the COVID pandemic, having become accustomed to a well-behaved mouth, there I was again with blistering, bleeding gums. The first person I consulted, an oral hygienist, advised me to stop drinking very hot tea and eating spicy curry—neither of which I had done, but I did not say this. It felt, somehow, that I must accept blame for the blistering and bleeding, even though I knew that I hadn’t caused it.

Freud of course would have had a field day with all of this–my problems (or the ones I am speaking of here) being so clearly and literally of an oral nature, and orality being a fundamental and primal basis for who we are in the world. Freud, and especially his acolyte Melanie Klein, also might have a lot to say about my own confusion about the symbolic significance of my mouth, on a psychological level. Am I the victim or the aggressor? Is violence being done to my mouth or by it?

Both, of course, are true. With my bloody, painful mouth, I am both victim and perpetrator, old man and child, an object of pity and a recalcitrant cheat who can’t, won’t look after himself as a grown-up should—a person who’d sacrifice the health of his own gums for a cup of too-hot tea or a curry that pleases and afflicts deliciously while also acting as a weapon of self-destruction. And facts be damned: although I have never been one to indulge in too-hot cups of tea or impossibly corrosive curries, I can still feel the guilt.

My acts of defiance are much more mundane. Although I have been a much better boy for years now, I think of the months after my first wife left me, when I felt completely unlovable. I coped well, largely for what I saw as the benefit of my bewildered children. But when it came time at night to brush my teeth, I didn’t brush them.

A small and silly act of defiance in the big picture of things (and, thankfully, not associated with any escalation in tooth decay or gum disease), but a stupidly and hopelessly (though discreetly) violent attack on my mouth and the years of care it had received.

Of course, in some ways, it was easier to blame and punish my mouth than to think about all I had done to create a marriage that ended so sadly. My mouth, whose normal appearance now belied years of struggle and care, my mouth. No surprise really that it was the site of my quiet lament at my failings.

It took the better part of a year and special medical investigations, initiated by my current dentist, for my bleeding-gum problem to be properly diagnosed. As it turns out, I have a rare autoimmune disorder going by the rather fabulous name of mucous membrane pemphigoid.

I live, on and off, with sore and bleeding gums. All very manageable, and thus far I have the condition mildly. I am so grateful, given my age, not to have contracted COVID-19; my sore gums seem so unimportant when others around me have been dying.

But in my aging body, which has now turned on itself through its autoimmune response, there also still remains the personal and emotional story of my bloody mouth—my slipping and falling, my pain and disfigurement, the long, long story of being cared for, of losing and of surviving.

The strange and, in my case, lucky compromise of life.

Leslie Swartz is a clinical psychologist and professor of psychology at Stellenbosch University, South Africa. He holds a PhD in psychology from University of Cape Town and a PhD in English (creative writing) from Stellenbosch University. He is editor-in-chief of South African Journal of Science. His first creative nonfiction book, Able-Bodied, deals with disability issues in southern Africa.  In 2021 he published How I Lost My Mother, a memoir dealing with issues of care, illness and exploitation. “I write a lot for my academic work, and use writing as a way of finding out what I think and how I feel.”