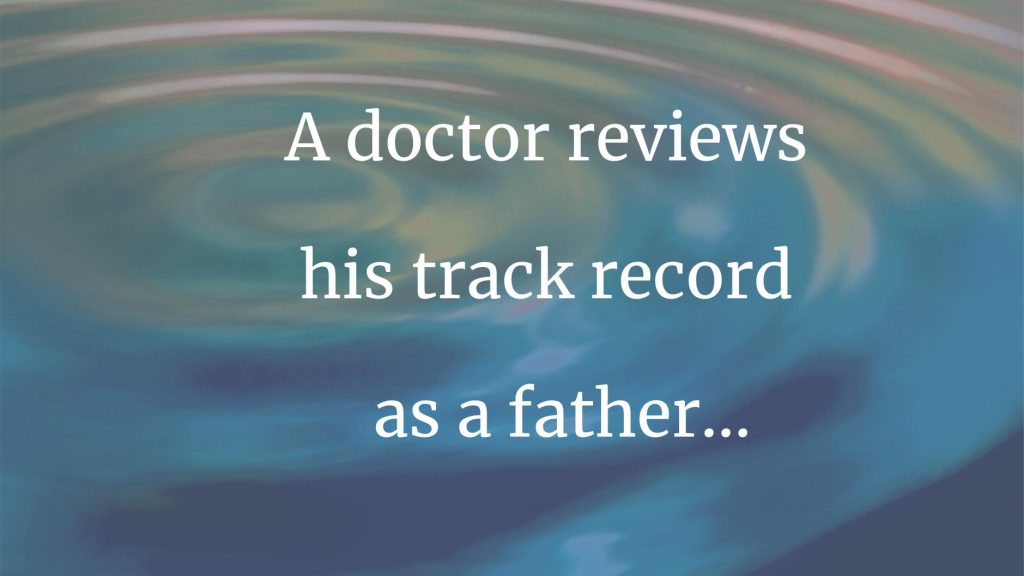 After forty-three years as a nephrologist-internist and teacher, I recently retired from medicine. This final stage of life is a time of reflection. Was I a good physician? On a more fundamental level, was I a good friend, husband and father?
Despite its many challenges, I have never regretted following my cherished vocation. There were far more rewards than regrets. By contrast, my record as a father feels a bit less exemplary.
During my first three decades as a physician, the prevailing professional ethos could best be described as “macho medicine.” When I trained as a resident-fellow, and later, when I practiced full-time as a nephrologist-internist, my colleagues and I were routinely expected to work sixty or more hours per week.
At the time, I never questioned this: It was de rigueur for my generation of physicians. But now, in hindsight, I can see that my unwavering commitment to my profession often eclipsed my obligations as a parent.
In the mid-Seventies, during my first year of residency, I met my future wife, who was a nurse on the kidney service. Back then, before the advent of work-hour limitations, I was on call every third night, sometimes more often. My wife and I, along with the rest of our colleagues, accepted this grueling schedule as the norm. After my residency, I embarked on a renal fellowship, during which our sons were born. My work schedule remained unchanged.
Then came twelve years in solo practice, as one of only two nephrologists in the area. It was a grind of nights and weekends on call, without the aid of hospitalists who could have handled my inpatients at those times. My wife never criticized my professional commitments and did her best, as a parent, to compensate for my absences.
On one of my alternate weekends off, our older son, age eleven, was slated to compete in a Sunday wrestling tournament. Keenly aware that I had missed many such events, I had carefully arranged my call schedule to permit me to go to this one. That, at least, was the plan.
Early on tournament day, I learned that a dear friend’s mother had just been admitted to the hospital where I worked. I decided to stop by and visit her–as a civilian, not as a physician–before heading off to see my son compete.
I arrived at the hospital wearing street clothes, as befitted my off-duty status. Even so, a nurse I knew well approached me.
“When you’re here on Monday, you should see Mr. Jones right away,” she said, then shared some details about the patient, a fortyish gentleman in acute kidney failure.
Hearing her description, I could tell that her concerns were well founded. True to my calling, I hastened to scout out the patient.
As I entered Mr. Jones’s room, he screamed, “Don’t touch me! I’m in agony…everything hurts! It’s the worst pain of my life!”
A glance at his chart crystalized the problem: His enzyme levels indicated severe muscle injury–an occasional consequence of influenza A, for which he’d tested positive. And his last potassium level, taken two days earlier, had been 5.5 meQ/L. A potassium level higher than 6 can stop the heart!
My new patient (at this point I was no longer a visitor) needed another potassium check, fast.
Should I call the other nephrologist to take over his care? I wondered fleetingly. After all, he’s the one on call. And there’s my son’s tournament….
No, I could not. In the code under which I’d trained, it was unacceptable to sidestep an urgent professional responsibility. I hurried off to tell Mr. Jones’s medical team to get a potassium level, stat.
Returning from this, I heard a Code Blue called–in Mr. Jones’s room. His heart monitor displayed the disrupted patterns characteristic of excess potassium.
Intravenous calcium brought him back to a normal heart rhythm–success! But his potassium level was a whopping 8.4 meQ/L. To bring it down, we had to put him on dialysis right away.
In fulfilling my professional duty and staying with Mr. Jones, I knew that I was forfeiting my fatherly commitment–and in that era before cell phones, there was no way I could get a message to my son. But I already knew: There would be no wrestling tournament for me.
I ordered the dialysis, and for the first two hours, things looked good. Then, all of a sudden, Mr. Jones screamed and clutched his chest: It was a severe heart attack. Within seconds, he went from chest pain to ventricular tachycardia to fibrillation.
We ran another code–this time, unsuccessfully.

Afterwards, I had to go to Mr. Jones’s family and break this tragic news. I also had to struggle with my own sadness and frustration. Why had all of Mr. Jones’s potentially treatable issues turned fatal?

Meanwhile, just a few miles away, my son was competing. At home later that evening, I learned that he’d won the tournament, despite separating his shoulder in his final match.

I was proud of him.

Of myself, not so much.

As a professional and a physician, I’d done my duty, but as a parent, I had failed. When I apologized, my son said that he understood.
Over the years, this pattern of absence became the norm. On the surface, my sons reluctantly accepted my professional commitments; they kept their disappointment to themselves and never openly blamed me for not being there. Only much later, as an adult, did my younger son tell me that I had been an absentee father.
Reflecting on it all now, I feel guilty. My patients loved me for the care I had given them over so many years. My sons love me too, but I can’t help thinking that they feel, as I do, that something was missing from our relationship during those years–something that can never be revisited or repaired.
Now, seeing the way contemporary doctors are trained to practice, with regular days off, work-hour caps and the support of hospitalists, I don’t smirk and smugly say, ‘The days of the giants are over.’ I really believe that the influx of female physicians has had a major, positive impact on the medical ethos and has changed macho medicine for the better.
I can see that it’s possible to be both a dedicated physician and an involved and loving parent. In the early decades of my practice, there simply weren’t that many subspecialists or hospitalists available to ease some of the burden of care. Nonetheless, I still struggle with my past. My macho brand of professionalism was an inadequate excuse for so often being missing in action as a dad.
All I can do now is to tell my sons that I am sorry, and try to make amends by being an attentive father and grandfather.
Ironically, in reflecting on my failings as a dad, I love my sons even more–and especially because they themselves are exemplary dads.
Print This

Greg Rutecki is retired from general medicine practice at the Cleveland Clinic. After graduating in 1974 from the University of Illinois Medical School in Chicago, he trained as an internist at Ohio State University and then completed nephrology training at the University of Minnesota. Over the last ten years, he has written medical-humanities pieces on topics including the impact of composer Gustav Mahler’s endocarditis on his Ninth Symphony, and the use of radium to treat opera composer Giacomo Puccini’s laryngeal cancer.

13 thoughts on “Life With Father”