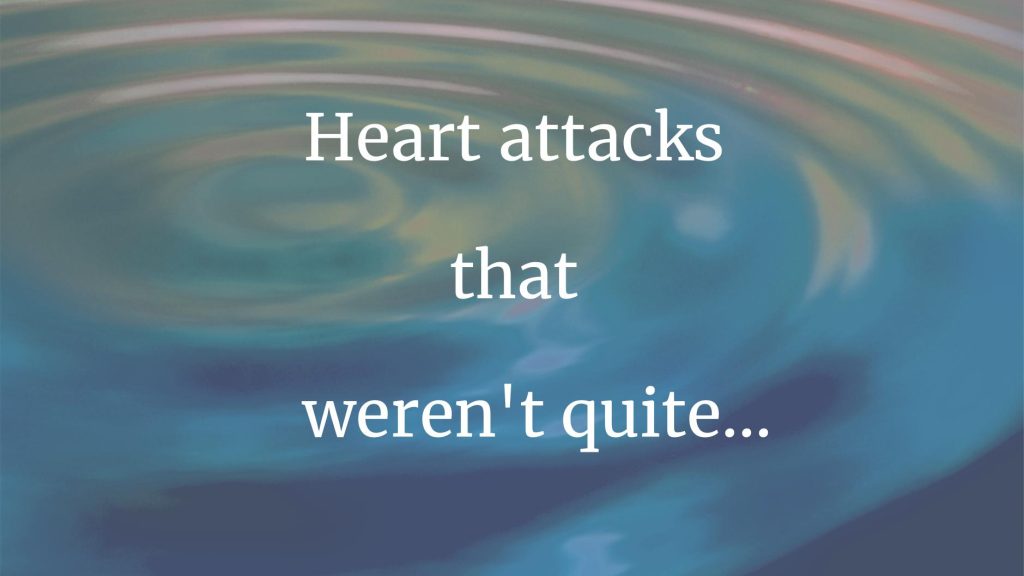 On June 2, 2010, I was giving a poetry reading at the faculty club at Columbia University Medical Center in New York as part of their “Literature & Medicine” series. I still have the list of poems I read that day, poems that spoke of my work as a nurse practitioner. One poem described my examination of an abused woman; another recounted the experience of a young teen, raped by her sister’s boyfriend. Other poems concerned the mysteries surrounding death as well as the joys of healing.

Somewhere halfway through the reading, I developed what is aptly called crushing chest pain. I kept reading, even though as a nurse I knew I should stop, ask for help, call 911. During the Q&A after the reading, I felt light-headed and clammy, but I had no risk factors for heart disease, and I didn’t want to end up in a hospital away from home.

Maybe it was just heartburn, I told myself.

A few days later, in the cardiac cath lab of my local hospital, I was diagnosed with Takotsubo cardiomyopathy (TTC), also known as broken heart syndrome, a temporary malfunctioning of the left ventricle that mimics a heart attack, but isn’t one. Had poetry broken my heart?

After a few months of recovery, I continued to read my poems in a variety of venues, always with some anxiety, but without chest pain or a recurrence of the TTC–until March 10, 2022, when my friend Irene and I were giving a joint reading at a local library, a reading billed as “Caregivers Reading Poems about Caregiving.”

Our plan was to switch off with one another, reading four poems at a time, a call and response to see how our poems–hers about being a therapist, mine about being a nurse–might intertwine and inform how we care for both mind and body.

As I began to read my second poem, about my experience as a student in a psych hospital, there it was again after twelve years—that same crushing chest pain. This time the pain was more insistent; and this time I also foolishly continued to read, only excusing myself during the Q&A to go to the ER.

Once again diagnosed with Takotsubo cardiomyopathy, I wondered if poetry really could break a heart.

Now, again in recovery, I understand a bit more about what was happening as a backdrop to both of those poetry readings, to both episodes of my broken heart.

The first time, my daughter and her family were getting ready to move to another state, a thousand miles away. Perhaps it was that sorrow, combined with the stress of reading poems, that triggered the first episode.

And the second time? Reading in March, my subconscious was quite aware that the following month, April, would be the one-year anniversary of my daughter’s untimely death from breast cancer in that other state so far away. But why should these events gather and wound during poetry readings?

When I read poems that have originated in my real-life experiences as a nurse, I feel again the emotions that led to the poems’ creation. Hiding deep in my heart, the original traumas endured by my patients and the wages of intense caregiving surface with every reading. Those emotions, felt anew, and combined with the present stresses of my life, might create the perfect storm, the outpouring of catecholamines that could twice shock and injure my already vulnerable heart.

The risk of a second recurrence of Takotsubo is less than 10 percent. Having beaten the odds, I wonder how likely a third occurrence might be. The doctors don’t know.

There’s still much to be discovered about this syndrome–why it happens mostly to women, why it resolves, what might trigger it again. The best advice is not to do what you were doing when you felt that first chest pain, that first hint of a broken heart. Sometimes that’s impossible–we can’t predict when loved ones will die, when relationships will end, when viruses and wars will turn our lives around. But I can stop reading my poems aloud.

I’ve already cancelled the five readings I’d agreed to give over the next few months, and I won’t be planning any more. I’ll still write poems; maybe some will be published.

You won’t see me at the podium now, but I’ll be in the audience, applauding the poets who are, as I know, offering poems that just might break a tender heart.

Cortney Davis is the author of five poetry collections, most recently Daughter and I Hear Their Voices Singing: Poems New & Selected. Her honors include an NEA Poetry Fellowship and six Book of the Year awards from the American Journal of Nursing. “When I began working as a nurse, I was soon moved to write poetry and prose about my experiences with patients, with the universal conditions of suffering and recovery. I found that sharing transcendent moments in caregiving with others might help open and heal, if not the body, then the heart.”

32 thoughts on “How Poetry Broke My Heart”