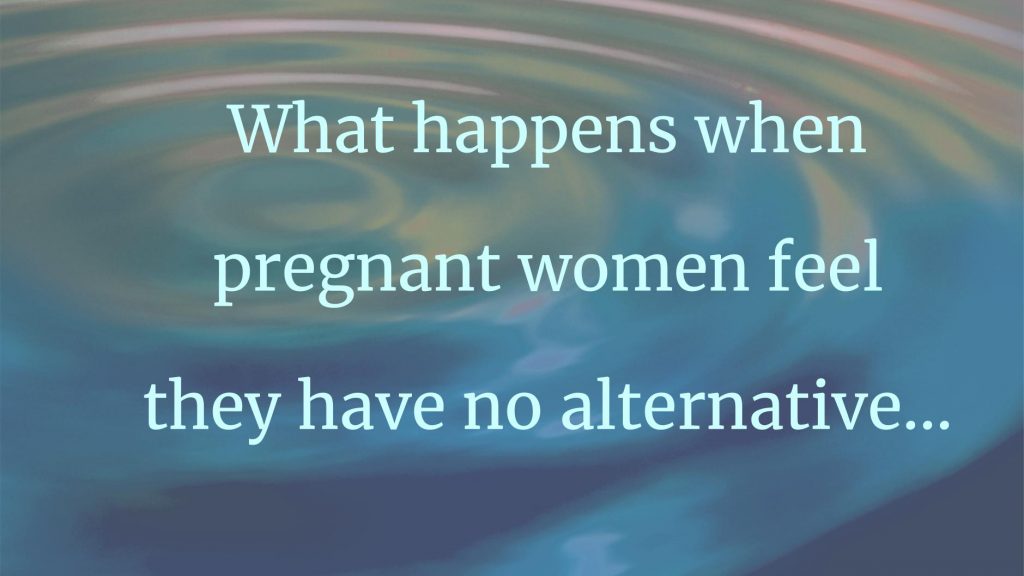 In my very first job as a doctor, working in a London hospital in the 1980s, I always took a ridiculously detailed past medical history for every patient I saw. I started to notice how many elderly women had had septicemia, a life-threatening infection in which enormous amounts of bacteria enter the bloodstream.

The neighborhood surrounding the hospital had once been the worst slum in London, and it didn’t take me long to guess that these infections were probably caused by illegal self-induced abortions during the hungry years of the Depression.

When I asked–slowly, carefully, subtly–I was told some intensely personal and secret stories.

One woman, Maggie, spoke to me woman to woman. She wanted to tell me what she clearly thought I needed to know.

“I always asked around about which local woman had the neighborhood ‘enema kit,’ and borrowed it,” she told me. I didn’t understand at first. Then she continued:

“You have to cut up a bar of carbolic soap. Boil it up. Squat over an enamel basin. Reach up inside yourself until you feel something like a walnut.”
Surely the cervix, I realized.
She kept on talking: “Put the nozzle into the groove you will feel there. Pump the carbolic fluid up through the groove until you feel an explosive pain in both sides of your belly. It needs to be in both sides. If it’s not the very worst pain you’ve ever felt–much worse than labor–you need to pump again. And again.
“After that,” she said, “you might, hopefully, have done it.”
No wonder there was so much septicemia, I thought. And I knew why Maggie was so insistent about the necessity of feeling pain on both sides. She was trying to squirt sort-of-sterile fluid right up through both fallopian tubes, into her abdominal cavity.

A woman named Bet didn’t want to talk about the three episodes of septicemia she’d suffered in between the births of her eight children. But she immediately knew what I was hinting at.

“My husband didn’t approve of that sort of thing,” she said, lips pursed as though she didn’t approve of it either. She paused as her gaze went far away. Then she visibly pulled herself together. “Needs must, though, eh. You do what you have to.”

She did want to tell me about something else that had happened all those years ago.

The sister of the upstairs neighbor had been put out on the street immediately after a “procedure,” but hadn’t made it home before she’d started torrential vaginal bleeding. She’d knocked at the upstairs neighbor’s door for help, but no one was home.
When she knocked at Bet’s door, Bet’s husband refused to let her in. He didn’t want her, he said, to abort on his premises. Bet begged and begged until he eventually allowed the woman to sit on a bucket in the back yard.
I tried not to show how appalled I felt.
Imagine being desperate enough to go for that illegal “procedure.” Now you’re standing outside a hostile stranger’s door–bleeding, in pain, humiliated. You’re lucky to be allowed to sit on a bucket in the stranger’s back yard. Then, when the bleeding lessens, you’re lucky to be able to walk home, in your soiled clothes, past your own neighbors.
“Better than nothing,” Bet said. “Needs must,” she said again, grimly.
I spent a while trying to get my head around these stories of desperate women–desperately strong women–managing by themselves.
When I told a senior ambulance man what I’d been hearing, he wasn’t the slightest bit shocked. He said that before 1967, when abortions became legal in the UK, the local ambulance crews had known that the hospital where I worked was relatively good at saving women’s lives. The nearby teaching hospital, by contrast, was more interested in calling the police. So unless a woman with septicemia or vaginal bleeding seemed likely to actually die in the ambulance, the crews would bring her to my hospital–even when it meant breaking the rules on taking patients to the nearest hospital.
Ancient history? Maybe not.

In the 1990s, I worked in another hospital, outside of London, as the UK equivalent of an ob/gyn intern. My job included scheduling the operating-room lists. If we weren’t full up with emergencies, I was told to pull notes out of the filing cabinets, which held a “waiting list” of women in need of surgery. Among these notes, I found the names of tens of women who had been left to “wait” for an abortion until they were past the legal time limit.

Since I was in charge of the scheduling, I could, and did, correct that–at least for the women who weren’t already out of time.

To me, it seemed clear that the doctors (all male) who’d previously done the scheduling had decided, in effect, that each of these women must have a baby she didn’t believe she could look after.

I don’t believe that the doctors filed those women’s names on the “waiting list” by mistake; I think they made a choice. Nearly thirty years after abortion had been legalized, the doctors had decided that these women would have no choice. The women were being forced to live for a very long time with someone else’s choice.

Fast forward to five years ago. I was back in London, working in the emergency department of the aforementioned teaching hospital. A woman named Farhana came in with profuse vaginal bleeding. She didn’t speak English, but as I recorded her vital signs and put in an intravenous line, her husband anxiously told me that they had tried many sorts of contraception.

“They’ve told me I’m too young to be sterilized,” Muhammad said, almost crying. “We’re got five children aged under six, and we’re living in two rooms. So when she missed her period, we were desperate.”

I knew straight away what he was not quite telling me. When I asked–carefully, sensitively–he slowly took some empty boxes out of his pocket.
“You can buy this in Bangladesh,” he told me. “It’s for menstrual regulation. My cousin sent three packs.”
Out of desperation and ignorance, Farhana had taken a medication overdose.
I remembered the elderly ladies saying that, when they’d used the neighborhood “enema kit,” they were always alone. At least Muhammad had tried to help, and was supporting his wife now.

“Needs must,” I said, quietly.

“We’ll help your wife now–no problem,” I told him. “And please let me tell you about the free local service. It’s at another hospital near here. There are specialists for contraception there, and if that fails, they can organize an abortion for your wife. It’s part of the National Health Service. It’s free,” I repeated.

As I handed him a leaflet, I realized that I was referring Muhammad and Farhana to the very first hospital I’d worked in–the one the ambulance crews knew would look after women.
It’s a circle, I thought.

Not quite a full circle, of course.

There are safer methods now. And some men, like Muhammad, support and help their partners. But even in the UK, where we’ve had safe, legal abortion for more than fifty years, not all women get access to it. And in the US, where abortion services have been demonized and driven from many communities, abortions are virtually inaccessible in many locales.

Because I now know what happens when abortions are not readily available, I want to share what I’ve seen and heard–what takes place when women are pregnant and desperate, when the medical care they require is out of reach…and needs must.

The author has been a physician in the UK for three decades. “I wrote this piece because I am so concerned about the increasing pressure on women in the US around abortion. I’m writing anonymously because I know that, especially in the US, clinicians also come under pressure–sometimes extreme pressure–around abortions. I want to underline the seriousness of those threats: not only to doctors but also to women’s reproductive freedom. And I don’t want to endure the highly inflammatory comments that can make up a part of that pressure. In my thirty-odd years of doctoring, I’ve never met a woman who didn’t take a potential abortion very, very seriously. Sometimes, though, it’s the least bad option. Then, in my view, it’s the woman’s choice what to do. And it’s my privilege to try to support her, to stand alongside her. It’s no different from what I do, as a doctor, in many, many other difficult situations.”