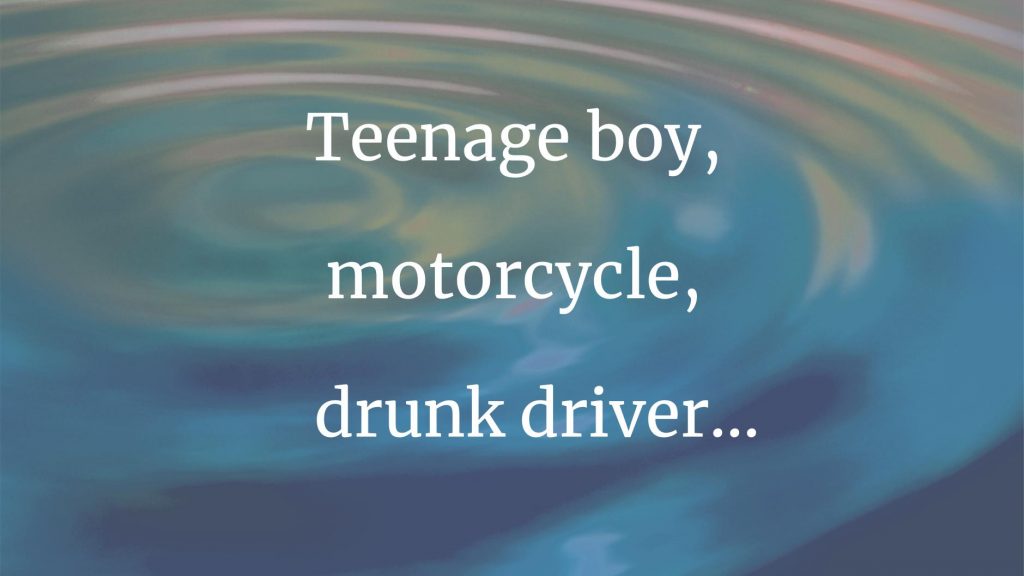 I’m staring at the IV tubing. We forgot to stop the fluids.

I’m standing in the resuscitation room alongside the naked, broken body of a teenage male. Unable to break my gaze on that dripping IV line, thinking, We’re going to flood him.

But it doesn’t really matter.

Somewhere in the background, muffled yelling comes through the doors.

“Sounds like they found the family,” remarks a nurse.

The tech is putting the young man’s things in a clear plastic bag that will be marked with a sticker bearing his name, medical-record number and date of birth. His last imprint on this earth.

“He was wearing a helmet,” the nurse says.

“A lot of good that did,” replies someone behind me.

I hear them, but I can’t focus. I see the nurses removing EKG stickers and sweeping dirt, glass and debris off the stretcher. They’re preparing the body, but no one has turned off the IV. Why is it still running?

A scream. This one more guttural. I can feel the anguish. This mother whose son lies on the stretcher. This son, for whom she’d probably kissed a thousand booboos, chased away a thousand under-the-bed monsters, whom she taught to use the potty, watched take his first steps. The son she will not see graduate college, or marry his soulmate, or hold his first child. Did she say goodbye tonight?

My mind switches gears, and I think about my own daughters, how they will never be allowed on a motorcycle, how much I love them and…

Shit. I forgot to FaceTime them. What time is it? Maybe they’re still awake? I wonder if my husband remembered to give them a ba–

Another scream–this one deeper. I think, His father must have arrived. I start to look over the body, realizing that there is very little blood.

“He must have lost a lot at the scene; dead on arrival,” says a colleague. “Hey, there really wasn’t anything you could do.”

He puts a hand on my shoulder, looks me in the eye. He notices that I’m starting to cry, and I notice all the people in the room. Something about carnage brings out all the curious eyes in the emergency department. We want to see the body, hear the story and find something that makes this person different from us. Maybe it’s a certain tattoo, or where they were found; maybe just the decision to ride a motorcycle on a dark, rainy night. We want to convince ourselves this won’t be our kids. Our husbands. Our friends.

I’m pushing back the tears, wondering if he’s right. Could I have done anything else? What if we had given him blood? Massive transfusion? Tranexamic acid to stanch the blood flow?

Now I have to go talk to his mom, and damn, I would do anything to avoid this.

I swallow the lump in my throat, blink and step out from the resuscitation room into the ambulance entry. In the far corner, a few EMS guys are laughing and joking with the cops waiting for me.

“Hey doc, what condition would you say he’s in?” one cop asks.

“Another car caught the driver a few blocks up the road,” the cop says. “It was a drunk.”

Smiling, he adds, “He did our work for us. He ran into a pole, and they figured out who he was when they got him out of the car.” I’m not mad at the jokes; he’s doing what he can to push off the tragedy of this moment. But I can’t bring myself to match his smile. To meet his eyes.

“I’ll go with you,” a security guard tells me. I see that the exit sign outside the resuscitation room is broken; the earlier howling and banging was the father taking out his grief on the entryway.

I think about people’s responses to grief. Some scream and fall to the ground, literally pouring their grief back into the world. Others say nothing and stare at you, as if challenging you to be wrong. The violent ones are the scariest; sometimes they are mad at us, sometimes at the world, sometimes at the ones who died–but they are always violent.

“Thanks for coming with me,” I say to the guard.

“The dad ripped the sign out of the ceiling. And three more family members just showed up,” he replies. He’s a big guy, 6’4″ and easily 300 pounds; he saunters instead of walking. I don’t know what he did before joining our security team, but I’m glad he’s here.

I sit down face to face with the family and stumble as I try to form the words.

“I’m sorry,” I say, turning my hands over and over in my lap. “He was hit by another driver….he lost a lot of blood. He…he died before he arrived here.”

I barely get the words out before the screaming and pounding start again. His father grips the hospital chair with white knuckles, every vein in his arms standing to attention. His mom rocks to and fro, clutching a tissue with desperate intensity. Every time she rocks, she lifts her face to the ceiling and emits that same guttural, visceral moan that I heard before.

“What happened?” one suddenly asks.

“We aren’t really sure,” I answer, afraid to give more information in this fragile environment.

The second sister takes out her phone, staring at it as if trying to decide whom to call. The third sister moves to their dad’s side, trying to get him to sit down. I realize that the dead boy was the family’s only boy, and the youngest.

“Do you have any more questions?” I ask. There’s not much of an answer; one sister’s small head shake sets me free to go. Their grief is palpable, pulsatile, overwhelming. I know they’ll have more questions later, but for now, I leave them with their grief.

“I’m so sorry for your loss,” I whisper, knowing it’s not enough. Security gives me a nod, and I walk out, proud of myself for holding back tears.

Tears won’t bring their son back, I remind myself. It won’t make them feel better. Whatever sadness I feel is part of my story, not theirs. I know it will return to me later: I’ll see his face in my sleep. I’ll wonder about his parents the next time I see a patient with a similar surname. I’ll be dragged back into this moment the next time I talk with a friend who wants to buy a motorcycle.

I’m walking back to my desk, and I’m almost there, almost–and I’m stopped by one of our frequent visitors who wants a turkey sandwich. Another man in a hallway bed starts yelling that he wants tuna–and morphine. I get back to my seat, and bed management calls to tell me that we need to document an EKG on the patient with chest pain. I hang up, and a nurse asks me why the resident hasn’t called to report on Room 110.

I text my husband to see if the kids are awake.

I tell the hallway patient’s doctor about the request for pain meds.

I ask a tech to grab a turkey sandwich for the first man.

I remind the resident to call in the report and document the EKG.

I check my watch.

Jacqueline Pflaum-Carlson is an emergency medicine, internal medicine and critical-care medicine physician at Henry Ford Hospital in Detroit. “I started writing as a child, but mostly put it on hold through medical school and residency. I really started exploring writing again during fellowship, this time as an outlet for the heavy emotional burden that often comes with caring for critically ill patients. I love having the opportunity to create my own stories, often inspired by the people I meet or the encounters that I’ve had, and the ability to end the story in a way that is cathartic for me. This story is based on a real story whose family and patient have stuck with me over time. The changes I made to the original story reflect how I feel now, as a mother, looking back on that patient and his family.”