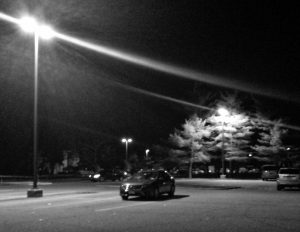 Jef Gamblee is a hospice chaplain from Westerville, Ohio. He first appeared in Pulse [1] in December 2014. Jef is a second-career ordained Unitarian Universalist minister, having spent twenty-five years in commercial and corporate television as a director of photography. He keeps his hand in still photography to maintain his sanity.

“As a hospice chaplain, I frequently visit adults with dementia who live in the ‘memory units’ of assisted-living facilities. On one such visit, my last of the day, I went to see a very sweet woman whom I hoped was stable. It was clear when I arrived that she was dying, and that I wasn’t going to make my grandson’s fifth birthday party. Walking to my car after she died, I took this photo. The light and the empty lot seemed to underscore my life story at that moment.”