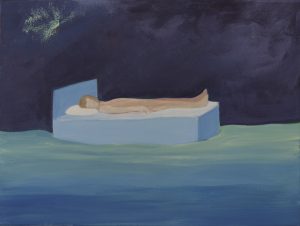 Cortney Davis, a nurse practitioner, is the author of five poetry collections, most recently Leopold’s Maneuvers [1], winner of the Prairie Schooner Book Prize in Poetry. Her most recent nonfiction publication is The Heart’s Truth: Essays on the the Art of Nursing [2]. An illness narrative in words and images, entitled Twenty-Six Days: When the Nurse Became a Patient, is forthcoming in Spring 2015 from Kent State University Press. On the lighter side, she enjoys serving as poetry editor of Alimentum: The Literature of Food [3]. Her website is cortneydavis.com [4].

“In June 2013 I was admitted for day surgery, a surgery in which everything went wrong. After a series of complications, I was a patient for twenty-six days. When I received IV hydromorphone (Dilaudid) for pain, I entered an odd land that was both comforting and terrifying. Pain disappeared; I was adrift on a calm sea. But along with relief came bizarre and frightening dreams and thoughts, including the dark, roiling sky and the flash of lightning depicted in the upper left corner of the painting. This image is one of twelve that will appear in Twenty-Six Days: When the Nurse Became a Patient.”