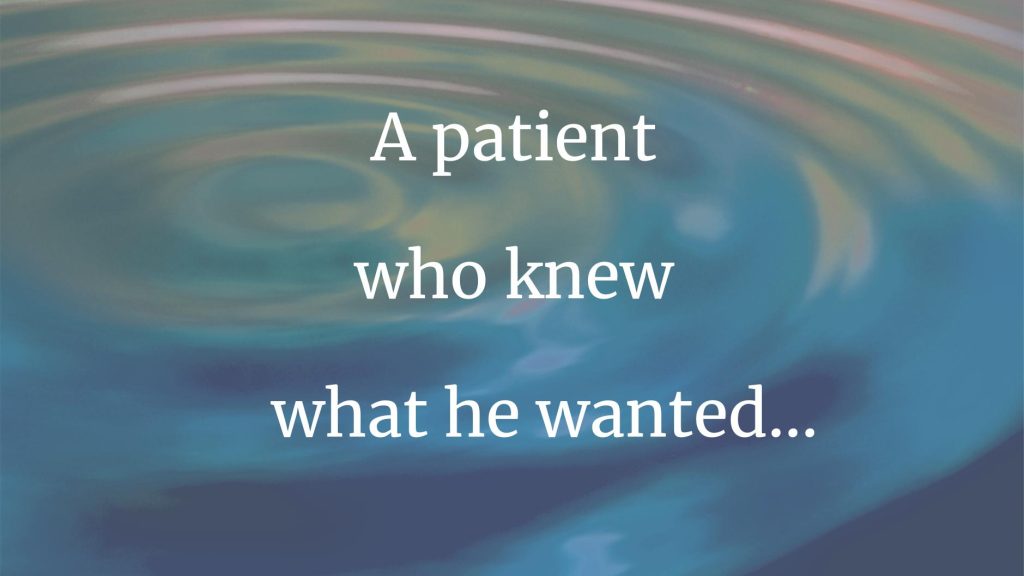 I was in my third year of medical school, partway through my psychiatry rotation.

“You’re ready for your first mental-capacity consult,” my attending said. I felt excited at being deemed ready to administer this evaluation, which is used to determine whether a patient has the ability to make decisions about their own care.

“The medicine team is confused about this one,” my attending continued. “He’s clinically improving from his COVID infection, but he wants to withdraw from care and has refused physical therapy. The resident thought that he would be her miracle patient; she doesn’t want to give up. She thinks he must be depressed. Keep in mind that he’s in his nineties and is still on high-flow oxygen.”

In my head, I imagined a frail, elderly man at peace with his decision and his life. The thought was soothing. As we approached the COVID floor, I began gearing up. I put on the gown, the gloves, an extra mask over my N95 and finally my trusty face shield. It felt as though I were donning battle armor, preparing for what might be a tough conversation.

It’s nothing I can’t handle, I reassured myself.

I entered the room a confident young knight in shining armor, ready for a valiant fight. But then I saw him.

There he was, sitting in bed, a youngish-looking, rather well-built man. A man who looked no older than sixty-five. He was eerily familiar, perhaps a bit like my father, a few years down the line. Despite the dried blood crusted under his nose from the high-flow oxygen tube, the man looked remarkably comfortable.

I felt a little shaken, but stayed on task. My attending was watching; I couldn’t choke.

“Hello, Mr. Michaelson,” I said. “My name is Kirstin Peters, I’m a third-year medical student with the psychiatry team.” We exchanged pleasantries, and I learned that Mr. Michaelson grew up on a ranch and had served in the military.

Then I started going down my capacity checklist. He knew that he’d had COVID and had been in the hospital for weeks. Before I could finish describing how much he was improving, and how they’d been weaning him off of his oxygen, he stopped me with a single word:

There was a long pause.

“I’ve been in the hospital for months, and I’ve been in so much pain,” he said forthrightly. “I’m tired.”

“We can work on getting your pain under better control—”

“No,” he said sternly. “I do not want any more pain medicine. I know my body, and it is telling me that I am done. I’m ready to die.”

Here was a man who looked nearly half his age, sitting up comfortably and chatting with me, showing no signs of effort in his breathing and no signs of depression, telling me that he was done. I just couldn’t believe it—and I didn’t know how to respond.

“Do you have any family nearby?” I asked.

“My wife is back home at the ranch.”

Aha, I thought. This could remind him of a reason to hang on.

“Have you spoken to her recently?” I asked.

“I can set up a phone call or a video call, whichever you prefer.”

“No, she knows I’m here, and she knows me. Besides, she doesn’t speak much English. There’s no need to call.”

“Do you have any children?” I asked, a bit desperately.

“No, I never had any children,” he said, looking straight into my eyes. I think he could see, even through all of my masks and shields, that I felt confused and at a loss.

Fearing that my attending would cut me off any second, I quickly jumped into the mini-mental status exam, thinking, It must be delirium. Mr. Michaelson must not grasp the situation.

To my dismay, he answered every question perfectly.

Losing steam, I doggedly began a series of screening questions for depression.

He must be depressed. How else can he not see that he’s going to recover?

Mr. Michaelson let out a loud, exasperated sigh. He stared into my eyes again, and I felt even more naked and unprotected than before.

Stunned, I felt my armor crack and shatter to bits. I shot my attending the “Please help” glance.

“I understand how you feel, Mr. Michaelson,” he said quietly. “But we are a life-preserving society.…”

He kept on talking, but Mr. Michaelson wasn’t buying it.

I felt floored and exhausted. After what felt like hours, my attending and I finally left, my attending’s only recommendation being to start Mr. Michaelson on bupropion for adjustment disorder with depressed mood.

The next day Mr. Michaelson looked even better clinically, but we had the same conversation, to my intense frustration: Why isn’t he listening? How does he not see that he’s getting better?

Day after day for almost a week, he improved clinically—until suddenly, he didn’t.

On the fifth day, I came in ready for the same exchange, but he looked worse–much worse. His oxygen requirement had gone up, right back to what it was the first time we met.

I looked at him, feeling stunned yet again.

He smiled, lying in his bed.

“I told you I wasn’t getting better.”

Before I could respond, he scoffed, “Bet you docs think I did this on purpose to spite y’all!”

I paused. Of course, I knew he didn’t do any of this on purpose. But I couldn’t help but feel frustrated.

He was getting better, he wasn’t dying, a voice in my head kept insisting. But now he was.

My attending swooped in and spoke to him in the kind and understanding way he always did with patients, but I stayed silent, mulling over Mr. Michaelson’s words.

I had never before felt such a strong reaction to a patient’s comments.

Mr. Michaelson continued getting worse, no matter what interventions we caregivers came up with. Eventually he went on to comfort care, as he’d wanted from the very start.

If I had beaten COVID and was healing, strong, and had a wife waiting at home, I sure as heck would want to live, I kept thinking.

But that’s the thing: It was never about me. It was about Mr. Michaelson, telling us from day one what he wanted.

We were the ones who needed to listen.

A fourth-year medical student at the University of Arizona College of Medicine Tucson, Kirstin Peters is passionate about critical care and integrative medicine and is currently applying for residency in internal medicine. “During the height of COVID, our hospital had a no-visitors policy. I found myself struggling to process having so many patients suffering from COVID without having the support of their families and loved ones. This peaked during my psychiatry rotation, when I had the opportunity to have in-depth conversations with these patients about their isolating experiences. We lost many patients, and I began writing down their stories as a way to remember them.”

5 thoughts on “Why Isn’t He Listening?”