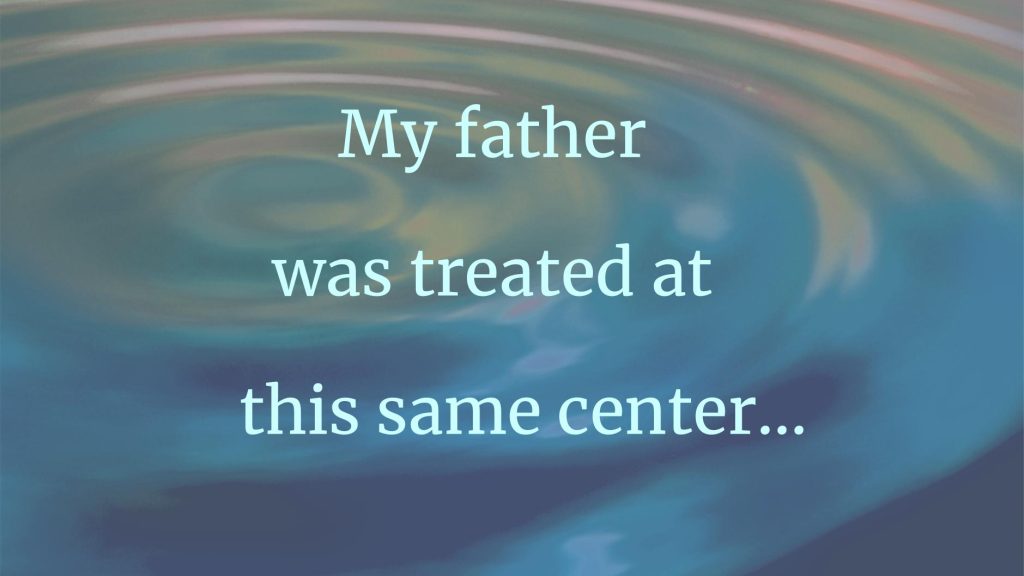 It was a Thursday morning, my first day on the medical oncology service. I hurriedly gathered my white coat and badge, the block letters “3rd Year Medical Student” unmistakable in fresh ink. Taking a deep breath, I forced myself to look up at the cancer center.

This is going to be difficult, I thought.

Just one year ago, my father was treated at this same center after being diagnosed with stage IV colon cancer. I’d never imagined that the first death I would witness while in medical school would be his.

As I approached the center’s entrance, unwelcome memories of chemo suites, ambulance bays and exam rooms began to surface. Glimpsing myself in the window, I felt the stark contrast between my role here today and my role one year ago. I closed my eyes; my mind screamed the words “colon cancer,” as if all my family’s pain and suffering could be captured in a two-word chief complaint. How would I get through the day? Would I be able to empathize with the patients and their families, or would I be paralyzed by flashbacks of my own loved ones in these same rooms?

Our first patient was a young woman named Viv. I saw the words “colon cancer” next to her name in the chart. My heart sank. Was that how simple the diagnosis had looked next to my dad’s name?

“She has a young son,” my attending told me before we entered Viv’s room. “Quality of life and maintaining grace are her priorities.” I nodded uneasily.

Vibrant, talkative and bubbly, Viv offered us candy that she’d brought just to brighten our day. I hoped fiercely that my attending was bringing her good news.

Unfortunately, the scans showed that Viv’s cancer had progressed significantly, with growing metastases in her liver and a new lesion in her lung. Upon hearing this, she looked towards her son.

“No more chemo for me, doc,” she said softly.

As my attending gently brought up hospice as an option, I admired his ability to convey compassion while maintaining a professional demeanor.

My mind wandered to my own experience of sitting in that chair. What if Dad’s treatment team had initiated this hard conversation with us? Did we make a mistake in not thinking about hospice and urging him to consider it?

Desperately, I tried to ward off these thoughts.

As Viv expressed her wishes for hospice care, I marveled at her poise, grace, strength and acceptance.

How could someone so young have come to terms with this? I thought. Why isn’t she angry? And why am I? Maybe it’s the injustice of her having to die at such a young age and leave behind her son—and my own anger at the injustice of Dad’s death.

When the visit came to an end, I didn’t want to leave. A part of me knew that I would never see Viv again. The reality of her impending death hung heavy in my heart. If we could just stay here, maybe time would stand still, maybe she could stay on this earth with her son. I looked at the toddler, busy driving his toy truck along the arm of the chair, his youthful innocence a shield against this harsh reality.

The last appointment of the day was just as difficult as the first.

It was hard to peel my eyes away from Ms. Kane, a young woman suffering from esophageal cancer. She weighed only eighty-seven pounds and was sitting in a wheelchair, breathing through a tracheostomy tube. Her radiation treatment had caused left-sided torticollis, a drastic, involuntary twisting of the neck, which had led to massive swelling in her left eyelid.

Family members and friends filled the room, wide-eyed, their hopes resting on my attending’s next words. Again, I so wished that we were bringing good news. Sadly, despite numerous rounds of chemotherapy and immunotherapy, Ms. Kane’s disease had progressed. She was too frail for a clinical trial.

When my attending introduced the idea of hospice, I could tell from the blank stares around the room that no one had anticipated this.

I understand, I thought. Somehow, that final piece of bad news hits like a train.

Because the tumor was blocking her trachea, Ms. Kane could communicate only through writing.

“I am not ready to die,” she wrote, tears welling up in her eyes. Her tenacious will to live reminded me of my father’s.

The following week, I rotated through inpatient hospice. Death was an almost tangible presence as we rounded on our patients.

As I’d expected, most patients had cancer. Making enormous efforts to suppress the memories of my dad’s last days, I successfully numbed my emotions until the morning we rounded on a woman dying of metastatic breast cancer. She was fifty-one—my dad’s age when he died.

Standing at the foot of her bed, I finally allowed myself to feel raw emotion. In a daze, I listened as her husband told us about his wife’s adventure-filled life, her wonderful personality, her passion for art. His voice broke whenever he looked at her. I felt an overwhelming urge to ease his grief, to offer him the words that had helped me through, to tell him, “You are not alone.”

Instead, I stood there. Silent. I was bursting to comfort this man, yet I remained speechless, wavering between my urge to share my experience and my wish to fit the norm of staying anonymous—a norm that I had absorbed without wanting to.

I struggled with this for a long time afterwards. Was my silence due to lack of courage, or was it a reflection of Western medical culture? Why didn’t I return to the room to share some of my experiences and offer comfort to the patient and her husband?

Is there a place in the physician’s role for using personal experiences to comfort patients or their families? When is it appropriate to tell our stories, to offer understanding, to embrace someone in solidarity?

My father’s death has changed my view of medicine. I better understand the deep pain felt by families—and I question the need for a demarcation between the personal and the professional. I ask if and when we should bring our own stories into the patient encounter and let ourselves be swayed by our personal experiences.

How can I not be swayed by my own?

Caitlyn Myrdal is a recent graduate of the University of Arizona College of Medicine in Tucson. She is passionate about cutaneous oncology, has published numerous academic works in that field and is interviewing for a residency in dermatology. Outside of medicine, she enjoys photography, travel, hiking, backpacking and listening to new audiobooks. “After my father’s death, I struggled to integrate my own experience and my professional practice. After one particularly difficult clinic day, I returned home and began typing the pages that morphed into this story, my first piece of narrative writing. The process of reflecting helped me to heal in ways I could not have imagined. Since then, I have continued to find meaning through writing and intend to continue throughout my career.”

11 thoughts on “Where My Story Ends and Yours Begins”