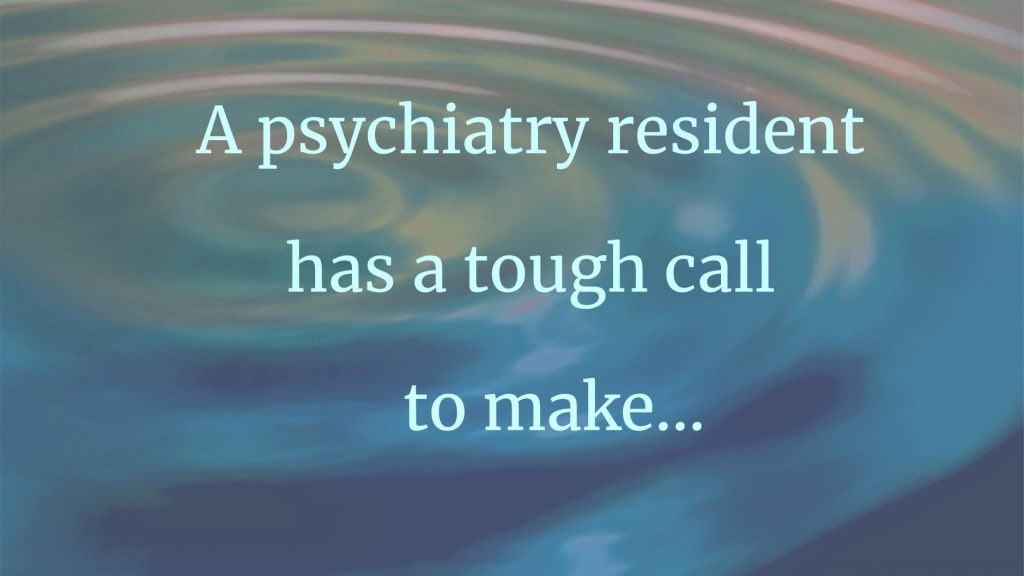 Seventeen years ago, I was a senior psychiatry resident, moonlighting on weekends in the psych unit at a small rural hospital. Usually the unit was quiet. In this remote corner of northern Canada, we were taught to value resources and avoid “unnecessary” psychiatry admissions.

Arriving one rainy Friday, I headed to the ER to let them know I was there. Among the mostly frail, elderly patients, one person stood out: a healthy-looking woman in her early thirties, about my age.

She looked at me with embarrassed, curious eyes–the lightest blue eyes I had ever seen. Wondering if she was a psychiatric case, but not wanting to violate her privacy by checking her chart, I headed up to the unit.

A bit later, the ER physician called about the woman. “She took an overdose about six hours ago,” he said. “Something about a breakup with the father of her children.”

I got down to the ER and introduced myself to the woman, Jane, and her mother, Marian.

“I’m the doctor covering psychiatry this weekend,” I said, omitting that I was a resident–not quite a full-fledged psychiatrist. In those days, moonlighting residents routinely worked without a senior physician to supervise.

“You seem so young to be a doctor,” said Marian, clearly distraught at her daughter’s state. Her blue eyes blinked away tears.

“I’d prefer to see Jane alone first, if that’s all right, and then we can all talk together,” I said.

“I don’t have anything to hide from my mother,” Jane replied, then launched into her story.

She’d taken an overdose of prescription narcotics she’d bought on the street. “But I don’t want to die,” she said tearfully. “It’s just been a rough few weeks. I can’t see my kids–their dad won’t let me.”

In response to my questions, she acknowledged that, yes, she’d recently been arrested for drug possession–“but the cops had it wrong.” Her small hands smoothed her jeans at the knees.

“Do you want to end your life?” I asked.

“Yes. No. I mean…no,” she replied, seeming confused.

I’d hoped that she would express regret; her uncertainty made me feel uncomfortable.

“I see bugs crawling all over the lights,” she said. “They’re everywhere.”

Hearing Jane describe this–a physical effect of the overdose–I realized that she still wasn’t quite in touch with reality, so couldn’t be released safely. I asked the ER doctor to keep Jane in the ER until the morning. Hopefully by then the bugs would be gone, and I’d feel more confident about letting her go home. At this stage of my training, I never felt quite certain of my clinical judgment.

Marian left, and Jane and I slept–she in the ER, and I upstairs in the on-call room. The next morning, Jane was bright-eyed and alert.

“I don’t want to kill myself,” she told me firmly. “I need to be a good mother to my daughters. They need me.”

Hearing this, I felt much better. “Can we meet with your family?” I asked, knowing that Marian had arrived with Jane’s brother, Brian.

Before seeing them, I reviewed Jane’s lab results, which revealed that she’d been abusing opiates and cocaine. I’d recently heard a lecture about how cocaine withdrawal can induce depression and anxiety, but for some reason that information didn’t occur to me as I considered Jane’s condition.

Jane, Marian and Brian sat in a small room, waiting to hear what I had to say.

“Jane probably overdosed because she was high, and her judgment was impaired,” I told Marian. “She doesn’t want to kill herself now.”

Marian looked at me skeptically.

She and Brian asked many more questions, and I offered answers, well rehearsed from previous such scenarios: “Your concerns are normal, but I believe that Jane will be all right if you can just stay with her for the next few days.”

In the end, they agreed that Jane should go home with them for now.

I wrote up the encounter. The ER had quieted down. The nurses made coffee. As I wrote, Jane the woman I’d talked to became Jane a series of unfolding paragraphs. Then I went home.

Four hours later, a nurse called. “Jane’s mother wants to speak with you.”

On the phone, Marian sounded anxious and distraught. Tears broke through as she spoke.

“Jane didn’t stay with us,” she said. “She went to stay at her own place. Her kids are with their dad.”

I felt a knot in my stomach. In my head, a voice began repeating, Did I make the right decision? Should I have admitted her to the unit?

Marian seemed so helpless, so scared for her daughter, who was now barricading herself in privacy. I could practically hear the subtext in her sobbing words: Please tell me what to do. Make the decision for me. You know what to do.

But I felt confused and conflicted. I felt so junior; I was used to running these situations by a supervisor. Although this wasn’t my first moonlighting shift, I still felt inexperienced.

“You’ll have to decide what you want to do,” I said finally. “I can only go by what I saw this morning. You can call the police, or go check on her yourself. Or you can do nothing.”

“I guess we disagree,” Marian said angrily. “I thought you were supposed to protect patients.”

“I can’t tell you what to do,” I repeated, trying to sound calm and controlled despite my qualms.

She hung up without a word.

I spent the afternoon in turmoil. The rumination went on for hours, until I finally fell asleep.

In the morning, I went to the psych unit to return the pager. I’d slept surprisingly well and had forgotten Jane.

An older nurse sat near the phone, holding the cigarettes she doled out to patients. She had something to tell me; from her furtive eyes, I saw that she wanted to be first.

“There was a fire,” she said. “They think it was the patient you saw in the ER–but they don’t know. No one can identify her body, it was so badly burned.”

“No one knows for sure yet.”

In my mind, I saw Marian’s eyes; I saw her agony, her loss burned into her soul. My ruminations gave way to something else: a rubbery feeling of not wanting to dive into this new reality–the reality of Marian’s loss, which was now also my reality. The reality that I did nothing. That I didn’t call the police. That I didn’t save Jane from herself.

“I have lost my daughter,” I imagined Marian saying. “I survived my daughter.”

In my mind, I watched her collect Jane’s ashes, like the pages of a novel scattered in the wind. I heard her say, Don’t let it go, this masterpiece. My girl. My beautiful daughter.

Then she said, Why didn’t you help her? Lock her up? Protect her? My baby?

I tried to tune out the voice. The tears. The wailing. The disbelief. I tried not to go there with her. Part of me wanted just to put one foot in front of the other–to work, to live, to move on and drive back to the city, where I was just a student training to be a psychiatrist and didn’t own all of this.

The next day, we got confirmation: Jane was gone.

From then on, for years, there would be the day she was here, then the day she was gone. In my mind, I relived these events, assigned and reassigned blame. Guilt planted itself and blossomed, nurtured in the soft earth of my doubts and questions.

There was DNA. And the coroner’s office. Jane had brought her barbecue’s propane tank into the house, and it had exploded. “Local Blast,” said the newspaper report. Like it was some party.

When the hospital administration met with Marian, they asked that I not be present.

“You should move on,” they told me. Protecting me–even though I hadn’t protected Jane as I should have.

Afterwards, the hospital’s attending psychiatrist reached out to me and asked, very kindly, how I was doing. I felt he understood my situation, and I felt better after talking to him.

Other people talked, too. The cleaning woman who’d seen Jane in the ER mentioned Marian’s “tireless support”; the nurse who’d taken out Jane’s IV mentioned the cocaine in her urine. Because the dead are not confidential.

And I went away. I drove back to the city. I would work and live and move on–in my day job and in the training program in the city, where I helped and healed.

But I knew that I would never really move on. This narrative would play itself out over and over, far away from any cemetery, real or imagined. And I would hear Jane’s mother wailing at her graveside long after I become a mother myself.

Catherine Hickey is a psychiatrist and an associate professor of medicine at Memorial University of Newfoundland. She has published many works on psychotherapy, medical education and geriatric psychiatry, including a textbook about intensive short-term dynamic psychotherapy. “I became interested in writing in my teenage years, and this intensified throughout my medical training. Writing is the best way for me to reflect on and process the emotional themes and conflicts that I encounter on a daily basis as a psychiatrist.”

9 thoughts on “The Lightest Blue Eyes”