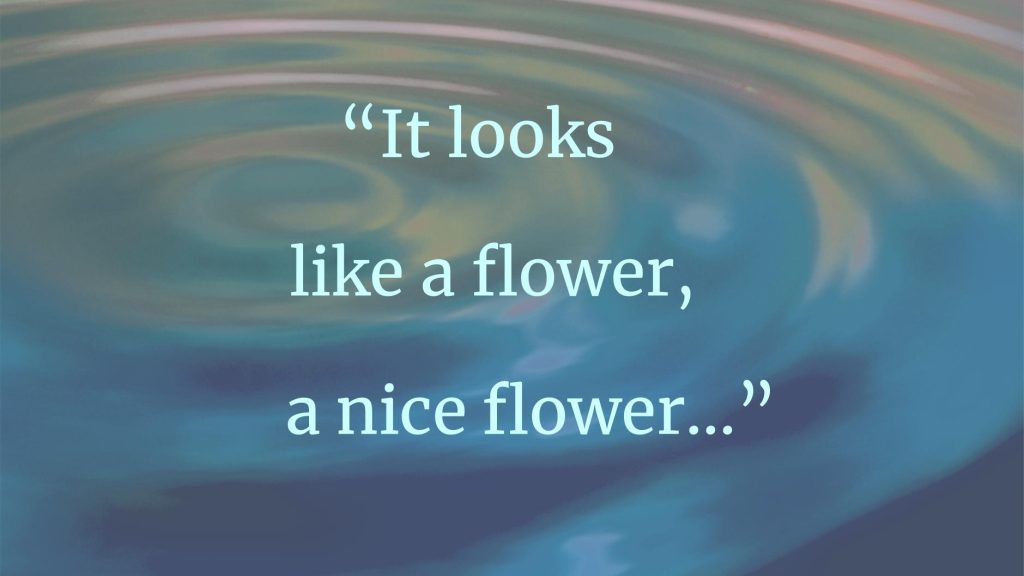 One winter morning in 2020, I was called to the reception desk to meet my patient Esther and her husband Hertzel. Some time earlier, I’d asked Esther–somewhat awkwardly–if she’d be willing to talk to me about her experience of being diagnosed with and treated for advanced breast cancer, and she’d willingly agreed. Today was the day.

Eighteen months earlier, Esther, in her sixties, had come to my hospital’s ER at her rabbi’s urging. The examination revealed a large tumor that had broken through the skin of her upper right breast.

The growth, which smelled bad and was bleeding in spots, was fixed to the chest wall, and inoperable. The ER scheduled Esther for a diagnostic needle biopsy the next day, after which she was to see me.

The biopsy confirmed breast cancer. Fortunately, Esther’s imaging showed no metastasis beyond the axillary lymph nodes, which meant that her cancer could be treated with intent to cure.

Despite my years of practice as a breast surgeon, I couldn’t help feeling shocked by the sight of this cancer. My first reaction was: What was she thinking, coming in so late? But this was not the moment to ask.

Esther’s treatment started with twenty-four weeks of chemotherapy, which was effective: Only a thick scar remained where the visible cancer had been. I then performed a modified radical mastectomy, after which Esther had six weeks of radiation therapy before starting a ten-year course of hormonal therapy.

I’ve seen Esther multiple times since the surgery, and thankfully there’s been no evidence of recurrence.

A few months after the surgery, I finally felt it was appropriate to ask Esther if she’d be willing to talk about her experience. I was hoping to establish a timeline for her cancer—it must have developed over a very long time—and get a better understanding of her thinking as the tumor had grown.

My first question was: “How long do you think the growth had been there?”

Rather than answering directly, Esther began by telling me about her background.

She and Hertzel belong to the Hungarian Hassidic community in Brooklyn. Esther’s father survived Auschwitz, but his first wife and their four children died there. After the war, he encountered his eighteen-year-old niece, also a survivor, in a displaced-persons facility. They married and had ten children, of whom Esther, born in America, was among the youngest.

Esther recalled how her parents had mourned the childhood death of a sister. Her father died of a heart attack; her mother, of colon cancer. Each time, doctors were called in only at the end.

Esther also shared a favorite story about her husband—one she’d told me when we first met. As a nine-year-old at summer camp, Hertzel had gotten lost in the woods while picking blueberries. Four days later he was found sitting by a tree, hungry, scared and dehydrated, by a rescue-team member who’d persevered after the search was officially over.

“It was miraculous,” Esther said. She and Hertzel smiled broadly.

When Esther described the tumor, her chronology was vague—defined more by religious holidays and family events than by months or years.

She’d never had regular screenings: “I had a mammogram once, but it hurt, and I didn’t go again.” She described a friend who’d died of breast cancer despite having yearly mammograms. ”So what’s the point?”

One March–it wasn’t clear which year—Esther felt a lump in her right breast. Hertzel thought it was nothing: “Maybe she’d bumped into something at the grocery store.” Over an indefinite period, the lump grew.

Esther did link the lesion’s growth to some specific events. The mass broke through the breast skin right after she and her family had finished sitting shiva for her sister, who’d died of breast cancer. Some time later, when her great-niece got married, the growth was visible beneath Esther’s dress despite her attempts at concealment. At the wedding, her daughter told Esther that she looked beautiful, but afterwards she admitted, “Mommy, you looked bad. We were able to see it.”

It was then that Esther began seeking medical help.

At first, assuming that she had an infection, she tried antibiotic ointment.

She then consulted a distant relative, a community nurse, who advised compresses of potato and honey, and, when these failed, vinegar. A local doctor tried to drain pus from the growth, then prescribed antibiotics. Finally, just before the high holidays, Esther spoke with the rabbi, who sent her to the ER.

Only upon hearing that she needed a biopsy did she realize that she had breast cancer. As she said this, I found myself simultaneously believing her and wondering how she couldn’t have suspected the truth.

During her treatment, Esther struggled with the community’s intrusive gossip—”Blah, blah, blah,” as she called it. When her chemotherapy caused painful mouth ulcers, and other women asked about the “pimples,” Esther would reply, “I wish that was all it was.” During radiation, she made up excuses for curious neighbors who saw her leave the house early every morning, always at the same time.

The worst pressure, however, centered on whether to have a mastectomy. Although I’d advised that this was medically necessary, she still hesitated. A powerful stigma hangs over such procedures: Esther’s recently deceased sister, swayed by her children, had refused a mastectomy because of the embarrassment it would cause the family.

On the other hand, Esther’s sister-in-law, a cancer survivor herself, stated dogmatically that if there’s a lump, the whole breast must go. A lumpectomy was out of the question: “The surgeons cut and cut, and then the cancer comes back.”

In making her decision, Esther felt she had no one to turn to. Her parents were dead, and she feared the outcome of a family meeting. Ultimately, to my relief, she accepted my advice. Esther preempted gossip by getting a prosthesis, so that, in Hertzel’s words, “You walk down the street, and no one would ever know.”

She summed up her decision philosophically: “Now I’m part man and part woman, but healthy woman.”

As our meeting drew to a close, she shared a conversation from before her diagnosis.

“My sister asked, ‘What does the thing on your breast look like?’ ” she recounted. “I said, ‘It looks like a flower, a nice flower.’ ”

It shocked me that, in Esther’s eyes, the massive, ulcerating growth I’d found so horrifying was beautiful–”a nice flower.” In that moment, however, I realized this was her breast, her body and her humanity. Her perspective might differ radically from mine, but it deserved my respect—like the lives and experiences of every other woman under my care.

When first inviting Esther to share her story, I’d explained that it was part of my ongoing project: interviewing women who’d had locally advanced breast cancer and illustrating their stories through art.

An accurate visual image is critical to portraying such cancers, but because photography can be unnecessarily disturbing, I’d asked then-medical student Lucy Rose, an accomplished artist, to create watercolor paintings based on photographs of each woman’s cancer, including Esther’s.

As Esther and Hertzel prepared to leave, I showed them Lucy’s painting. Hertzel’s face lit up just as it had when Esther told of his being found in the woods.

Esther held the painting up to the light and studied it carefully.

“May I take it home?” she asked. “I want to show it to my grandchildren.” 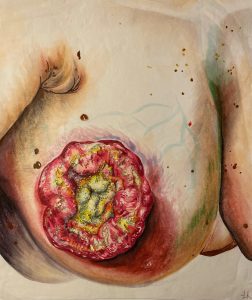 Christina Weltz, a breast surgeon, has practiced at Mount Sinai Medical Center in New York City for twenty years. “One of my greatest joys is connecting with and being there for my patients during a very difficult time. My hope is to convey some of their stories through writing.”

Lucy Rose is a lifelong multimedia visual artist with an affinity for creating beauty out of materials that some would consider unsettling. She graduated from Icahn School of Medicine at Mount Sinai in 2020 and is currently an ob/gyn resident at Montefiore Medical Center in the Bronx.

8 thoughts on “The Eye of the Beholder”