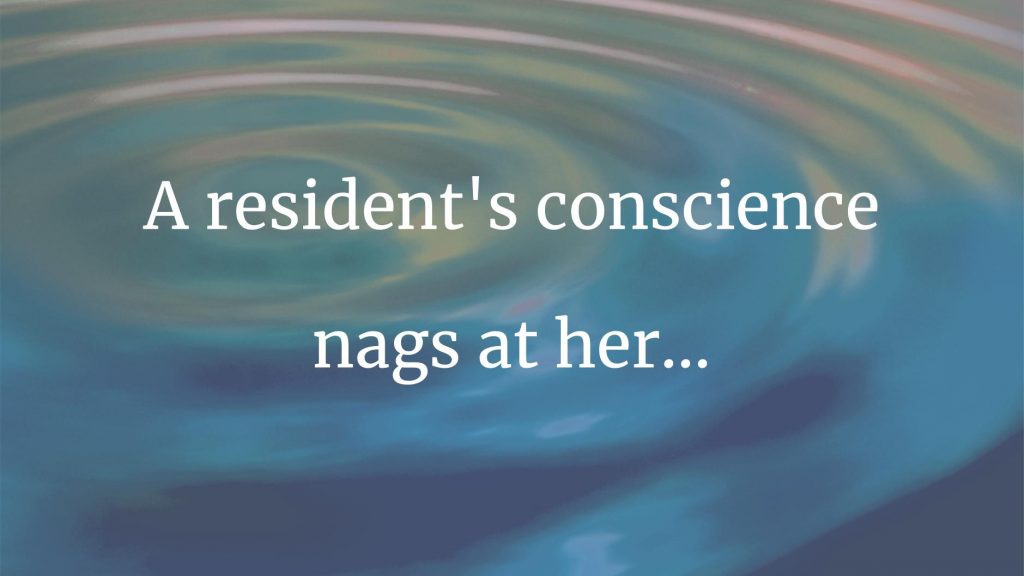 Tonight was yet another night on call in our emergency department–a chilly winter night on which I did a cruel deed: I discharged a homeless man back out into the cold.
This is a routine event in the life of psychiatry residents like myself. Normally, no one would bat an eye. It shouldn’t have mattered to me, either–except that the previous night I’d had to walk home from the hospital parking garage in decidedly adverse weather.
The streets were covered with slush and ice, which, along with the heavy rain and bitter winds, made my usually effortless fifteen-minute walk a nightmare. As wind gusts kept upturning my umbrella, I struggled to manage it while also trying to keep my feet from slipping on the ice.

The walk seemed never-ending. I was not dressed appropriately: My sneakers got soaking wet. My bare, gloveless hands grew frigid and painful. I was frozen and shivering. I did, however, have a safe, warm destination to go to.

The minute I got home, I soaked my hands and feet in warm water. It took a good five minutes before the pain eased. I changed into pajamas, made myself a cup of steaming hot tea, draped a shawl tightly around my shoulders and settled into the comfort of my couch, dragging the heat pillar closer. Only a half an hour later did I feel warm, comfortable and like myself again.

Somehow, this experience left me quite shaken. My thoughts turned to the many homeless people in the area who were facing this brutal winter with far fewer resources. But I was quick to brush aside these guilt-provoking thoughts and went on pampering myself with my blankets, shawls and sweaters.
Then, tonight, I was called to see Mr. William, a man well known in the ER as a “frequent flyer.” He’d been discharged a month ago; now he was back, requesting admission for depression.
Walking into his room, I saw a tall, stocky, middle-aged man dressed in the hospital’s thin green scrubs and sleeping on one of the recliner chairs, a blanket covering him up to his chin.
“Mr. William! Mr. William!” I said. No response. I tapped his leg. He drew the blanket down with a start, half opened his eyes and nodded, then drifted back to sleep.
“Sir, I’m going to request that you try to sit up for a bit so we can talk,” I said.
“Sorry. What were you saying? I haven’t slept in a few days,” he replied, rubbing his eyes and sitting up. His hair was disheveled, and his nails were overgrown and caked with dirt.
“What brings you to the hospital tonight, sir?” I asked.
“Oh, I think I need to stay a few days so I can clear my head,” he said. “It’s been hard.”
“Tell me more about what you’ve been going through,” I said.
“I’ve been feeling depressed. I hear voices…I’m tired, and I need to get some sleep…I’ve been on the streets for a long time now,” he said, then pulled the blanket up to cover part of his face.
“Sounds like it’s been a stressful past few weeks for you,” I said. “I’m sorry to hear that. You mentioned hearing voices. Can you tell me more about them? What do these voices say?”
“I don’t remember,” he mumbled. “I need to check myself into the hospital.”
“Sir, have the voices at any time asked you to do things you don’t want to? Have they asked you to hurt yourself or others?” I asked.
He shook his head, then slumped down in the chair. “Miss, can I get something to eat?”
After going through a screen for psychiatric symptoms and performing a safety assessment, I realized that there were no real grounds to justify admitting him. I walked over to the ER pantry to fetch him a sandwich and, per protocol, told him I’d be back shortly after a discussion with the attending psychiatrist.
I briefed my attending, who responded: “The patient’s presentation merits outpatient care. He can be discharged.”
From a psychiatric perspective, this was definitely appropriate. From a humanitarian perspective, though, the answer was less clear. Every resident who’s working night shifts is keenly aware of this painful moral dilemma: Do I determine a homeless person’s treatment plan based solely on my medical judgment, or do I give that person shelter on compassionate grounds, regardless of medical need?

There is never a right answer.

If you admit a patient on compassionate grounds, the inpatient staff are quick to communicate their displeasure. If you don’t admit the patient, then your conscience is just as swift and harsh in its condemnation.

Like most residents, I hate and dread having to make this decision–but here I was, facing it again. Eventually, I opted for the “psychiatrically appropriate” level of care, which meant discharging Mr. William with resources for outpatient follow-up treatment.
Slowly and reluctantly, I walked back to him.
“I’ve had a discussion with my team, and we think what’s likely to help you most is to seek treatment at an outpatient clinic, like the JFK Clinic right round the corner,” I said.
I handed him a printed sheet. “This paper has a list of shelters where you can stay for the night.”
He looked up at me, disappointment written all over his face.
“I’m not going to a shelter. I’ll rather spend the night on the streets,” he said quietly, turning on his side and closing his eyes.
I recalled being out in the freezing cold the previous night, and how vulnerable and lonely I’d felt.
That’s what he’s going back to, I thought, feeling a sharp pang of guilt.
I communicated my decision to the ER physician, who said, “Sure. I don’t think he said he was suicidal or anything. We’ll get him out of here soon. Thanks!”
He stood up and walked towards Mr. William. I rushed out so I wouldn’t have to see him ask Mr. William to leave.
Well, it’s still early in the night, I told myself, trying to appease my conscience. Rationally it made no difference, but to me the thought provided some vague solace.
As I said, the situation was in no way novel. I’ve made many such decisions in the past year. Yet this one tugged at my heartstrings more than any of the others, because I’d had a taste of what it means to be on the streets on a terrible winter night. I felt ashamed for being ruthless and unfeeling. But the deed was done.
Of course, this won’t be the last time that I’ll need to do such a thing–and I find that the most deeply disturbing of all.
About the author:
Aarya Krishnan Rajalakshmi is a first-year fellow at the Massachusetts General Hospital/McLean Hospital Child and Adolescent Psychiatry program affiliated with Harvard Medical School. She completed her residency at Drexel University College of Medicine, in Philadelphia, and received prior psychiatric training in India, her home country. “My love for writing dates back to my school years, when I found joy in creative writing. After I entered medical school this fell by the wayside, but my parents encouraged me to continue writing. Being in a field like psychiatry, which deals so intimately with human experiences and emotions, I’ve found that writing serves as a powerful medium by which to process my responses to deeply moving exchanges and experiences.”
Print This
PrevPreviousCasseroles and Conversations
NextBeing ThereNext

7 thoughts on “The Big Chill”