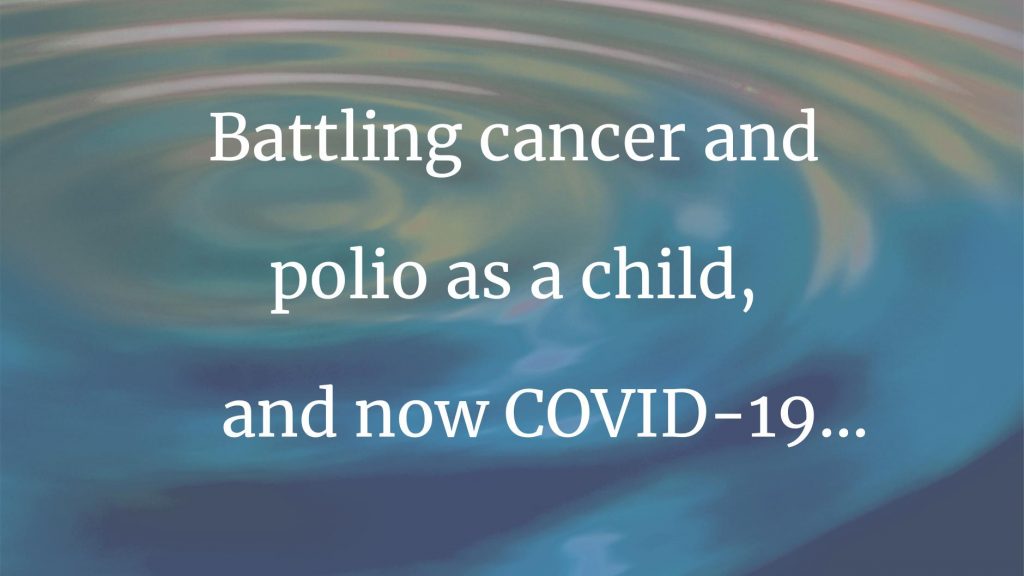 Editor’s note: This two-part series presents the stories of Wim and Jo, a husband and wife whose lives were profoundly impacted by coronavirus (COVID-19).

My name is Jo Ann, and everybody calls me Jo. I’m seventy-four years old. I’ve enjoyed teaching grade school for forty-two years and plan to return after COVID-19–if they let me. 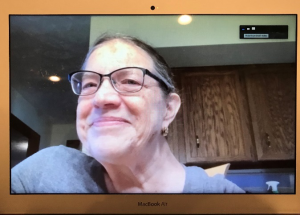 My childhood was different than most. At the age of eighteen months, I was diagnosed with Wilms’ tumor, a rare cancer affecting the kidney. Because I wasn’t expected to live more than six months, my parents were told to take me home. My uncle, fortunately, found a doctor who removed the kidney and gave me deep X-ray treatments to overcome the cancer.

When I was seven, I caught spinal meningitis. Again, my parents were told I would die.

A year later, I was infected with polio. Because of national shortages, our county never received vaccines. In fact, testing was also delayed for me. I received a spinal tap only after I’d become paralyzed. My doctors thought I’d require an iron lung forever–if I survived. Just like before, I lived, but was limited in terms of what I could do. My left arm just hung immobile, next to my body. 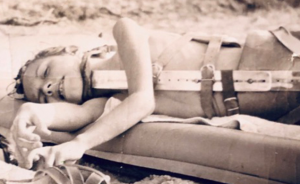 One year after getting polio, Jo remained in a corrective brace to stabilize her neck and spine

Even now, after all these years and multiple reconstructive surgeries, I still have paralysis of the arm and continued breathing problems as a result of the polio.

My family was very concerned about me. They didn’t think I’d become a wife, a mother or a teacher. They were certain I’d require another person to care for me for as long as I lived. That made me angry and lit a fire in me. If somebody tells me I’m not going to walk, I’ll walk. I’ll find a way to do whatever I want in life.

Before my husband, Wim, and I were infected with COVID-19, I knew it was a big problem. Early in the pandemic, we remained cautious. We didn’t share anything with anybody else, and we wiped down everything that came into the house. But we never wore masks. By the end of March, we stopped leaving the house. Around the time of the governor’s stay-at-home order, Wim developed a headache and fever alongside his cough. We both suffer from chronic cough, so this didn’t seem too out of the ordinary. But to be safe, he slept in the loft on an inflatable bed, and we kept everything we used separate. We figured if anybody was going to get COVID, it would be me. Unlike Wim, I’m not so strong.

Over the next few days, Wim’s fever continued to rise. He’s a stubborn guy and was resistant to calling the COVID hotline. Five days after his illness started, I also developed a fever and cough. I berated him, “Are you going to delay calling when my fever and cough get worse?” I’m feistier than he is and eventually made the decision to call.

Because test supplies were limited, they didn’t feel either of us were sick enough to get tested. That frustrated me. I wondered, Is this another situation like when I caught polio? Will testing be delayed, and anything that can help us be given too late?

Over the next few days, we both got worse. We each kept wiping down the thermometer so the other one could measure their fever. Mine went away with Tylenol, but Wim’s continued despite Tylenol and ice packs. About a week into Wim’s illness, he was shaking so badly that he couldn’t get a sentence out. I genuinely thought he was having a stroke. I called 911 and was told not to open the door to anybody but the paramedics. They didn’t want Wim spreading COVID into the community.

When the paramedics arrived, I honestly didn’t know if I’d see my husband again. I told Wim that I loved him, and that I’d be brave for him. I couldn’t even kiss him goodbye, because the paramedics wanted to limit my exposure. Before leaving, the sheriff reiterated that I shouldn’t open the door to anybody–unless it was paramedics with an ambulance there to pick me up.

And then, just like that, everybody was gone. I was all alone. That was the hardest part. As I’ve gotten older, Wim has had to care for me each day, because of my health problems. I didn’t know if I could care for myself without his help, and still live the life I was used to living. I couldn’t even have my sister or children help, because I didn’t want to get them sick. It was scary, but I wasn’t paralyzed. When there’s a crisis, I stay calm and do what needs to be done.

In the initial days of Wim’s hospitalization, he tested positive for COVID-19. I spoke with staff at the COVID hotline, and they diagnosed me with COVID-19 based on my symptoms and my exposure to Wim. When I asked about testing, just to confirm, they told me it was a waste of time.

By the fifth day of Wim’s hospitalization, I received a phone call from him. He told me they were rushing him to the intensive-care unit (ICU) to place a breathing tube. He couldn’t explain more than that. I could hear them wheeling him down the hallway. You should know that the last sight I had of my brother, who died of gangrene, was of him with a breathing tube. I also remember that when I had polio as a child and was fighting for breath, that iron-lung ventilator stood outside my hospital room, waiting for me. In my mind, if you ended up on a ventilator, you didn’t have much of a life to live. When Wim called, I was concerned about the worst–him dying. I told him that I loved him, but I don’t think the moment registered for either one of us.

Over the next week, I was able to see Wim a few times during video updates from his physician. Seeing my husband on the computer, unconscious and with a breathing tube, helped me realize how sick he was. At home, I continued to pack myself with ice and take Tylenol for daily fevers. My children helped by placing meals on a table outside, so that I could pick them up after they’d left. It was tough, but I did the best I could.

Because of chronic breathing problems, I keep a machine that measures your blood-oxygen level. During this illness, there were many times when my level dropped too low. When this happened, I’d take deep breaths and try to pump the number back up. This made me panic at night. I’d lie in bed wondering, Am I breathing enough? Am I going to die in my sleep?

In the last few days when Wim had the breathing tube, my fever, cough, body aches and diarrhea started to improve. The day his breathing tube was removed was the same day my fever went away for good. Isn’t it funny how things work out?

A few days later, however, my physician called to tell me that my blood was dangerously thin. It was a result of the blood-thinning medication I take; its effects can especially fluctuate during illness with COVID-19. He told me to stop taking the medication and to focus on eating greens, like spinach. Knowing that I could bleed out and die, all alone, without ever knowing it, was scarier than any of the COVID symptoms I had. Over the next two weeks, I walked on eggshells, until my labs normalized.

The whole journey–from when Wim left the house until he returned, twenty-six days later–was extremely lonely. Once Wim was discharged from the hospital and sent to a rehab facility, I finally felt I could take a breath, knowing that we were both going to be okay.

When he finally returned home, it was wonderful to be in his arms again. You see, I’m four feet, seven inches short, and he’s six feet tall. When we dated, many years ago, the kids in my classroom used to ask, “How does he kiss you at night?” I’d say, “I go up about three steps, and he stays at the bottom.” I usually hug him around the middle, and my face ends up at his stomach. This reunion was no different.

I’m glad that finding a vaccine for COVID-19 didn’t take as long as polio. In fact, we’re looking forward to getting our shots soon. I wish I’d been tested for COVID-19, even though it may not have helped. It would just have been nice to see it on a report. Now our big fear is whether we can get sick with COVID again.

I’ve learned a lot through my experience with COVID. There are still a lot of things I can do by myself, and I am the strong person my family tells me I am. I felt a lot of anxiety as a result of this virus, especially during the difficult nights, but I never lost hope. I remained peaceful and calm through the storm. 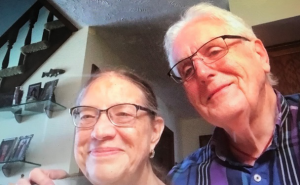 Wim and Jo, recovering after illness, together again

Ajay Khilanani is an assistant professor and co-organizer for the Humanism in Medicine conference at Michigan State University College of Human Medicine. He serves as medical director for digital health at Helen DeVos Children’s Hospital in Grand Rapids, MI, where he practices pediatric critical care medicine.

“I was introduced to Wim by a colleague who knew of my desire to explore illness and COVID-19–beyond my perspective as a critical-care physician. I was assured by my physician friend that Wim was a great talker and could tell a story. My friend was right. Because illness afflicts loved ones as well as patients, I also felt a desire to connect with Wim’s intimate partner, Jo, who, as it turned out, had also become ill with COVID-19. From the beginning, they were impressively open and honest. We spoke about six times over Zoom, with me scribbling notes, and then had a few follow-up phone calls.

“After our many conversations, I used my notes to write this piece in the first person. When I had Wim and Jo review a final draft, they seemed pleasantly surprised and relieved that I’d captured their sentiments about their experience. They gave their okay to having it published and seemed genuinely happy to know that others might learn from what they’d been through.”

PrevPreviousPerspectives on COVID-19: Bonds of Marriage, Part 1
NextLiving on the EdgeNext

4 thoughts on “Perspectives on COVID-19: Bonds of Marriage, Part 2”