In the middle of a five-way thoroughfare intersection, with the early-morning sun’s glare on my windshield, I hit the curb of the median and blew out my left front tire. Amid stopped traffic, I ran to collect my escaped hubcap, whose silver eye stared helplessly from among the automotive debris of previous accidents.

A policeman blocked the lanes until I could pilot my car into the gas station on the other side of the street. The attendant perched behind the bulletproof window told me that his mechanics wouldn’t be in until 9:00 am. I called the clinic to say I’d be late to work, but no one picked up the phone.

I’m a family doctor at Georgetown University Medical Center in Washington, DC. On Thursday mornings, I see patients at an office in a strip mall. We serve the local African-American community as well as many un- and underinsured patients. I’m attuned to myriad forms of psychic and bodily maladies. None of this changes the fact that I’m from a different world than that of my patients. Unlike the vast majority of the people I care for, I’m a white woman with a good salary, an elite education and every imaginable comfort of home.

I checked my watch. No way could I sit around until the mechanics came, so I pulled out the spare and got to work on my tire. Apparently jacks aren’t what they used to be: This one definitely put the “toy” in Toyota. How was I supposed to raise my one-and-a-half-ton car by attaching this confidence-puncturing, hooked metal handle to an eight-inch jack?

Just then a brown-skinned stranger stepped out of the convenience store, talking business on a cell phone jammed between shoulder and ear as he tapped out a fresh cigarette from the pack he’d just bought.

“Can you help me set up my jack?” I begged him.

He rested his phone on my car’s hood and told me to put on the emergency brake–I’d forgotten to do that. And, he pointed out, I’d placed the jack upside-down. He got to work.

“Name’s Jamal,” he said, unbolting the tire lugs. I introduced myself too.

Painfully, he cranked up the car with the flimsy rod. “I got a bad shoulder,” he apologized. I offered to try, but he waved me off.

“I got it, I got it,” he kept saying, stopping every now and then to answer his phone, letting whoever was calling know he was “on my way.”

Twenty minutes later, he’d mounted the new tire. “Now, that spare will get you to work and back. In fact, you can drive on it quite a while, just don’t go over fifty-five.”

I rummaged in my pack and found thirty-two dollars in cash.

He stepped back. He was bone-thin, with a grizzled jaw, rheumy eyes and haywire teeth.

I could see in him a flicker of something, igniting in me a feeling of common humanity that no mirror can capture.

“I’ve got money.” We looked each other in the eye. Suddenly I said: “I won’t ever forget you.”

We both stood, slightly stunned, searching for small talk. After a moment, Jamal blurted out: “You live around here?”

I hesitated. Should I tell him I came from a neighborhood of mansions and privilege? I didn’t want to admit this.

“I live on the other side of town,” I offered. In that part of town, a decade or so ago, I’d had to change a flat on one of the well-manicured residential streets. Car after car had whizzed by–and the man on whose door I knocked said that he couldn’t help me, because he didn’t want to risk throwing out his back.

Then I gestured in the other direction, toward the shabby road with its potholes and fallen telephone wires.

“But I work over there,” I said, as though my job at the clinic made up for our differences. I wanted to hold on to this moment of unexpected, overwhelming tenderness, in which our racial and economic divisions seemed momentarily to dissolve.

“Well, then, like I said–you can drive on that tire a long time. Just don’t go over fifty-five.”

We shook hands. Jamal headed to his beat-up U-Haul, and I got into my Prius.

When I arrived at the clinic, one half-hour late, all of the examining rooms were occupied by waiting patients. I readied myself to hear each person out, as I always do. But on this day I would also, one patient at a time, think hard about what it might mean to pay forward my debt to Jamal.

Caroline Wellbery is a professor of family medicine at Georgetown University Medical Center. She uses stories, visual art and even theater in her teaching. Her arts-in-medicine website is mdarts.georgetown.edu. Occasionally she writes essays, one of which was published recently in The Washington Post. “I felt compelled to write this story not only because of my ongoing awareness of the inequalities that permeate our society but because my profound and intimate moment with a stranger unveiled (momentarily) the mystery of how these inequalities might be overcome.”

10 thoughts on “Paying It Forward” 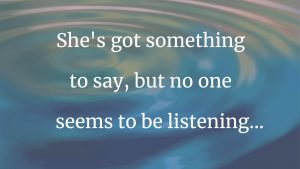