One More Child Left Behind

Making the diagnosis might be straightforward, but sometimes getting adequate medical care poses a more formidable challenge.

It was the end of an exhausting afternoon in our busy pediatric practice in Enfield, Connecticut. I had just finished seeing what I thought was the last patient of the day, only to find yet another chart resting in the wall rack, a silent signal that one more patient waited behind an adjacent closed door.

His name was Aaron. Six years old, he sat on the exam table cradling his left arm in his lap. The most striking thing about the arm was the large bluish bulge on the side of his elbow. His mother stood by his side; his grandmother sat in the corner chair.

“What happened?” I asked.

“Another kid pushed him off a table at school. He won’t move his arm.”

Gently, I palpated the borders of the blue bulge. Aaron winced in pain. I felt his wrist to check the circulation to his hand. “Squeeze my fingers,” I said. He tried and winced again.

“It’s likely broken,” I explained. “At this hour all the x-ray facilities in town are closed. Your best bet is to take him to the emergency room,” I said, wrapping Aaron’s arm in a sling.

“When you get to the hospital, they’ll take a special picture of your arm,” I told him. “Give them a big grin so it comes out well, okay?”

Aaron’s grandmother flashed a faint smile as they walked out.

The next morning Aaron’s mother phoned the office to tell me that, although the x-ray showed a fracture of the elbow, no “bone doctor” had come to the hospital to treat the break. Instead, she was given the names of some local orthopedic surgeons, with instructions to arrange an appointment with one of them that morning. But none of the surgeons would give her an appointment, so she wanted advice about what to do.

When I flipped through Aaron’s chart, I saw why none of the local orthopedists would see him. It was all too clear: Aaron’s health insurance coverage was through an underfunded state-sponsored Medicaid plan.

I telephoned the client services department of Aaron’s health plan. A cordial representative proceeded to give me the names of several participating orthopedic doctors in the area.

“Hold on,” I interrupted her when I heard the first name. “The mother already called that practice and was told they were no longer participating.”

“Sometimes that happens,” the representative told me. “The doctor opts out, but doesn’t inform us directly, so we still have the name on our list.” She gave me three other names and telephone numbers. “Call me if you’re still having a problem,” she said cheerfully. “Have a nice day.”

Feeling frustrated and irritable, I delegated the task of locating a participating provider to Laura, one of our medical assistants. “When you find someone, schedule the appointment and call the mother to let her know,” I told her, then turned my attention to my morning patients.

I returned from lunch to find Laura still on the phone. “None of the practices you gave me would accept this kid’s insurance,” she said. “I called client services again and got six more names. Each office was happy to schedule an appointment until I told them the insurance carrier. I can’t believe that no one will see a six-year-old boy with a broken arm!”

“We’ll demand an out-of-network pre-authorization for care and send him to Children’s Hospital in Hartford,” I said, gritting my teeth. “I’d rather he be seen by a pediatric orthopedic specialist anyway.” And I knew that Children’s Hospital was just a half-hour drive away.

Somehow Laura got the pre-authorization approved and called Children’s. I heard the phone slam down, then her footsteps resounded in the hallway.

“This is absolutely crazy!” she cried. “They won’t see him, even with a pre-authorization! Now what?”

I rubbed my forehead as though it were Aladdin’s lamp. At this point I needed a magic genie. I was running out of options.

“Why not try the orthopedic clinic at University Hospital?” our office manager suggested. I knew that only adult orthopedic surgeons worked there–and that it was further away.

“It’s a long shot, but–call them,” I said, conscious of the tightness in my neck.

A few minutes later, Laura shouted, “University Hospital will see him!” She was ecstatic. “They take his insurance!”

My jaw dropped. “Wow. Great! So now all we have to do is tell this mother she has to drive an hour to have her child attended by a participating doctor.”

I glanced at the clock. All told, we had placed eighteen phone calls over four hours to get one child the care he needed. When he was finally attended at University Hospital, twenty-four hours had elapsed since the time of his injury.

When this incident occurred, in 2003, 43 million Americans had no health insurance. Since then, the number of uninsured has grown to 47 million. With widespread unemployment generated by our current economic crisis, new members are added to these ranks daily. As a nation, we are now wrestling with the question of how to give all Americans adequate health insurance coverage.

The irony here is that Aaron had insurance. His story reminds us that threadbare health coverage is no great help or solace in time of real need. Unfortunately, his experience is not uncommon in a system that unofficially rations care and delays appropriate treatment.

As one of the world’s wealthiest nations, we have the resources to make sure that all of our citizens have timely access to affordable, high-quality health care. We should see that they get it.

Otherwise, patients like Aaron will continue to slip through the cracks–one child at a time.

(A previous version of this piece appeared in the online journal Dermanities and was subsequently published in Patients Are a Virtue: Clinical Tales in the Art of Medicine.)

Brian T. Maurer PA-C has practiced pediatric medicine as a physician assistant for the past three decades. As a clinician, he has always gravitated toward the humane aspect of patient care–what he calls the soul of medicine. Over the past decade, Brian has explored the illness narrative as a tool to enhance the education of medical students and to cultivate an appreciation for the delivery of humane medical care. To date he has published two collections of stories, Patients Are a Virtue and Village Voices. He can also be found at his weblog, www.briantmaurer.wordpress. 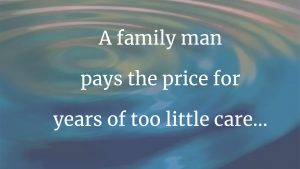