When I was nine years old, I was diagnosed with juvenile rheumatoid arthritis, an autoimmune disorder that triggers an inflammatory response of the joints, causing swelling, stiffness and severe pain. The disease sped through my body like wildfire.

By the time I was fifteen, my hip joints were utterly ruined. Just getting out of bed was a slow, carefully choreographed sequence of movements, with frequent pauses to allow the pain to subside. When I walked, my hips emitted sickening crunching sounds, bone grinding on bone.

I kept denying how bad my hips were, because I knew that the only solution was joint-replacement surgery. The thought of having my joints sawed through and torn away, and then having metal replacements hammered down into the bone shafts, petrified me. So did the prospect of a long, painful recuperation. But one day I tearfully confessed to my mother that I couldn’t take it anymore.

My mom–always focused when in crisis mode–immediately began making plans for the surgery, which was to take place six weeks later in a hospital 130 miles away, where my surgeon practiced.

After the initial relief, anxiety set in. I fretted about the postsurgical pain and about whether, with two artificial hips, I’d ever be able to have sex. (At this point I was still awaiting my first kiss.) I also worried about how I would handle my fears, given that expressing emotion was taboo in our uptight Midwestern WASP family. My parents, like many of their generation, believed that medical care applied only to the body, not the mind or emotions. When I tried to confide my fears to them, they’d change the subject–or, if they were feeling stressed themselves, fly into a rage.

The first hip replacement took place in early June, and the second one ten days later. I spent the rest of the month recuperating in the hospital.

Outside the walls, I knew, the world was spinning on. Families in swimsuits and flip-flops piled into station wagons, heading out to public pools. Teenage girls lay on chaise longues, coated in sunscreen. Kids chased lightning bugs. But my world was contained within my semiprivate room.

Being so far from home, I had few visitors besides my mom. (My dad and my older siblings had work obligations that made visiting difficult.) I told myself that I didn’t mind; I’d hate for anyone to see pathetic me in this place full of bedpans, bad smells and bare bottoms. At the same time, I missed my friends and family, my home, my life.

Besides feeling lonely and homesick, I felt deeply fragile and vulnerable. After a total hip replacement, the pain that limited your movements is gone, but there’s a new restriction: you mustn’t rotate the hip inward, as when crossing one leg over the other or standing pigeon-toed. Do this, and you might dislocate the artificial joint–a horribly painful injury that requires surgery to repair.

On the one hand, I felt like a prisoner in my bed, powerless to do much of anything. On the other, I felt as if I had the power, with one false move, to ruin everything.

The familiar sick, anxious feeling returned. At times, I’d find myself sobbing for no apparent reason. Once started, the tears wouldn’t stop; I tried to hide them until they turned off on their own. In between crying jags, I put up a brave front: I’m fine. I just need to get this over with so that I can go home.

Some of the nurses who caught me crying pretended not to see. Others asked if I needed a tranquilizer for my “nerves.” Only one ever asked me what I was actually feeling.

Alicia, in her late twenties, had a calming voice and lovely mocha skin. We’d seemed to bond instantly. I mistrusted adults, no matter how kind. They always seemed to be hiding the truth so as not to scare me–which scared me even more. Yet, somehow, Alicia broke through my emotional armor.

One afternoon she found me crying and scratching the hell out of my buttocks, which were itching from constant contact with the rough sheets. Helping me to sit up, she applied lotion to my posterior.

“Are you worried about something?” she asked gently.

“Yes,” I said. I hesitated. My throat felt tight.

“Why am I having more pain after the second surgery than I had with the first one?” I blurted, my voice high-pitched with fear. “It’s really scaring me. What if I’m not healing right? What if I have an infection?”

“I understand, and it’s okay to feel worried sometimes,” Alicia answered. She rested a reassuring hand on my shoulder. “No two surgeries are ever the same, even when it’s two hips on one patient. In fact, it’s expected that one side will hurt worse and heal a little slower.”

From her expression and tone, I knew that she was telling the truth.

I’d pictured my surgeon performing the second operation precisely as he’d done the first, down to the number of times a nurse swabbed his sweating brow. That’s a goofy idea, I realized.

I felt my anxiety lifting. My tears stopped. That alone would have been priceless, but Alicia offered me even more.

“A hip-replacement recuperation is easier than a knee,” she said. “Some knee patients don’t make sufficient progress.” These patients, she said, had to go back to the OR.

“You know what the doctors do then?”

I shook my head.

“They put them under anesthesia, then the surgeon takes the knee in his hands and shakes the living shit out of it.”

Picturing this horrific scene, I laughed harder than I had in weeks. I felt positively giddy: an adult had finally told me the unvarnished truth.

Before Alicia left that night, she handed me a slip of paper with her home phone number written on it.

“Call me if you need to talk,” she said.

Her words touched me deeply, although I couldn’t imagine bothering her at home.

She must have known this, because later that evening, just as the day’s distractions were done and dark, anxious demons began to swirl in my brain, my bedside phone rang. I picked it up.

“How you doing?” came Alicia’s tranquil voice from the receiver.

Surprised to hear her–and amazed that she cared enough to call–I froze for a moment before I could reply.

Heidi Johnson-Wright, a full-time power-wheelchair user, works as an Americans with Disabilities Act compliance professional for a county government in south Florida. A native Clevelander, she moved with her husband to Miami fifteen years ago; they’re among the handful of gringos who live in Little Havana. She has been a freelance writer for twenty-three years. Her forthcoming memoir about growing up with arthritis is entitled The Earthbound Tomboy. 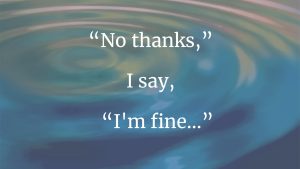 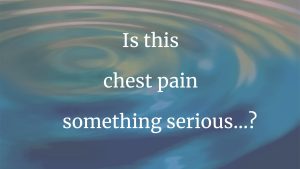 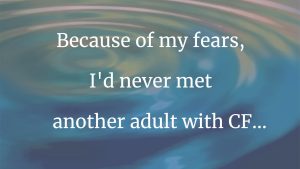