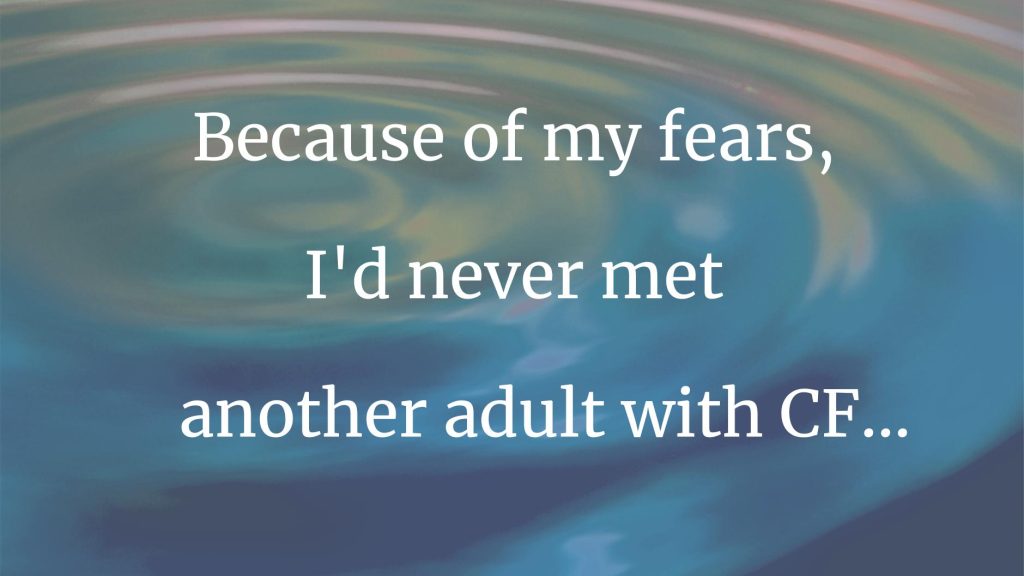 Mother’s Day, 2020. My daughter Skyler was sitting on the tall stool at the kitchen counter, her long hair in a messy bun that she’d pulled apart as she was thinking. For months, she’d been searching for financial support to attend university in the fall. It was the deadline for a scholarship offered by the drug company Vertex to family members of patients who have cystic fibrosis (CF).

Vertex has developed a drug that has significantly improved my quality of life. My family and I always joke about this drug, because it costs as much as a house. Every year.

I am a social researcher who listens for stories and searches for meaning in people’s lived experiences, and I am the mother of this one beautiful child. Lately, I’ve been listening to the voices in my own home—and I’ve realized that CF is not only my story, but my family’s.

CF is a disease that forms sticky mucus, akin to putty, throughout the body. The mucus can gum up the reproductive organs. Having a child is a privilege not afforded to many with CF; and for people with CF, living long enough to have a child graduating from high school has only recently become possible. Because science.

I didn’t realize how many of the body’s organ systems have mucus in them until I was diagnosed with CF at age twenty-five. This is a late diagnosis; mostly, CF is recognized within the first few years of life. (Our genes are loaded with the mutations that pass along the disease; my parents did not even know they carried it. They passed it along unsuspectingly. My brother is unaffected, and so, thankfully, is my daughter.)

Maybe it wasn’t so simple. In talking it through, she and I realized that our family doesn’t have a CF community.

When I was first diagnosed, Internet chat rooms were becoming popular. I poked around in the CF patient spaces, but was turned off by the profile photos of people holding their nebulizer cups during breathing treatments or wearing the vest that shakes the mucus putty out of your lungs. Joining these rooms felt like an admission that I was sick.

Due to those first impressions, and a lot of fear, I turned away from support groups. I lived in denial, afraid that if I fully engaged with other CF patients, I would succumb to the disease. Looking back, I see the faulty rationale—especially given how often I was ill with viral, bacterial and fungal lung infections. But in my healthier times, I avoided acknowledging my disease.

Reflecting on the twenty-plus years since, I realized that, because of my fears, I’d never met another adult with CF. I have incredible support from my medical team and my parents, but from other patients? No.

Then came a bigger realization. Over those decades, I’d never looked for support for my family—maybe because I couldn’t see that my illness was not just mine.

I thought of the trips to the emergency department, calling my parents in the middle of the night to come stay with my young daughter while my partner drove me to the hospital as I moaned or slept beside him with a fever of 104°. I suddenly felt selfish and sad. My family had had no one to empathize with or relate to their experiences—to the thoughts and emotions that come with repeated falls into sickness and repeated rounds of healing.

My partner of twenty-three years is a Fixer. He cannot listen without offering a solution. This tall, broad man with a goofy smile and piercing blue eyes is always there, cheering me on. At times this is incredibly annoying, but in general it’s wonderful. Chronic illness is repetitive yet unpredictable: Some years I sail through without spending any time in the hospital; other years, I spend weeks or months there.

In this life of alternating rounds of sickness and healing, my partner is a constant support. His recurrent struggles are tied to mine: How much will this cost? How will I do my job and parent my daughter and maintain my sanity and get to the hospital every day to visit my wife? Will she want me there? What will life be like when she’s on prednisone and becomes short-fused and manic? Am I doing it right?

It must be brutal. And yet we’d never tried to connect with other families who are experiencing the same journey. Thinking it over, I suddenly felt like we’ve been very alone.

My daughter’s CF story is the most complex of all. Her seven-year-old self watched me lie on the floor barely breathing, in anaphylaxis. Her ten-year-old self started at a new school when I was in the hospital, so couldn’t drop her off or watch as she walked into a strange building. Her teen self helped to manage social stuff and grief and household stuff brilliantly and without complaint. Her seventeen-turning-eighteen self, an intensely social being, stayed in complete isolation for sixty days to protect her mom from COVID, while her birthday and her high-school graduation came and went.

The essay she wrote for the scholarship application was an awakening for me.

CF has forced me to normalize hospital walls, my own mother being absent from my home, and the idea that my future will be impacted because of her health. Many times throughout my life, I have felt very alone being a child of someone with CF because even though I have to make it my normal, I cannot experience the disease first hand.

Although in the CF community I have never felt a sense of belonging or connection, I have experienced this in other parts of my life. Therefore, knowing what community is and the positive impact it has on me, I would love to explore communities that exist for CF patients. Community, just like life itself, is something that should never be taken for granted.

After reading this, I reached out to the CF Foundation. I was finally ready to connect, to admit I belong in community with others who know the depths of CF. I sent an email, not really expecting an answer; but got an immediate response.

One week later, I was standing in line at a coffee shop with two kind, dark-haired women from the Foundation.

We settled into a corner table, and I looked around to see who could hear me. I felt vulnerable in such an open space.

As we spoke about the Foundation and how it helps partners, parents and caregivers, the two women eased my discomfort with their compassion, saying things like, “We want to support you. What can we do?” They told me about the program Peer Connect, where adult patients and their partners meet over Zoom. They told me about Teen Advocacy Day for teens with CF.

Still, I learned that no support groups exist for children whose parents have CF.

The explanation is simple: There are not very many of these children. But that is changing.

These kids go about their lives as kids, planning for their futures and dreaming big dreams, all under the shadow of this disease.

Resilience is defined by an acceptance of challenging realities, a deep belief that life is meaningful and an uncanny ability to improvise. My daughter exemplifies these traits: Instead of crying out in despair, she draws meaning from hardship. She radiates the ability to live as an optimistic person while also understanding the fragility and beauty and ugliness and unfairness of a genetic disease.

As a researcher, I’d love to explore this resilience in those with CF, their partners and their children. These are the humans I’m curious about, because I don’t understand how the crushing weight of chronic illness and healing doesn’t just kill us all.

As a mother, I’m grateful that, as my girl stated, she’s learned the value of this life. My only child and her immense wisdom, who could use some support.

Kelly Keena is director of education for a global safety science organization and serves as board president of the Morpho Institute, a global nonprofit that supports Amazon rainforest conservation. She also serves on the board of the Rocky Mountain Cystic Fibrosis Foundation. Her work has appeared in the Health Story Collaborative and in her blog, Chronicle of Healing. A recipient of the Colorado Alliance for Environmental Education’s lifetime-achievement award, she is a native of Denver and lives there with her husband, dogs and chickens. Her daughter is a university student in Chicago. “My first love was writing; it has been a large part of my life personally and professionally. I love the flow of language and the ability to relay thoughts, emotions and experiences. I only recently started publishing my writing as a way to help others understand illness and the demands of chronic disease.”

PrevPreviousBlack and White
NextWhere My Story Ends and Yours BeginsNext

9 thoughts on “My Family’s Chronic Illness”