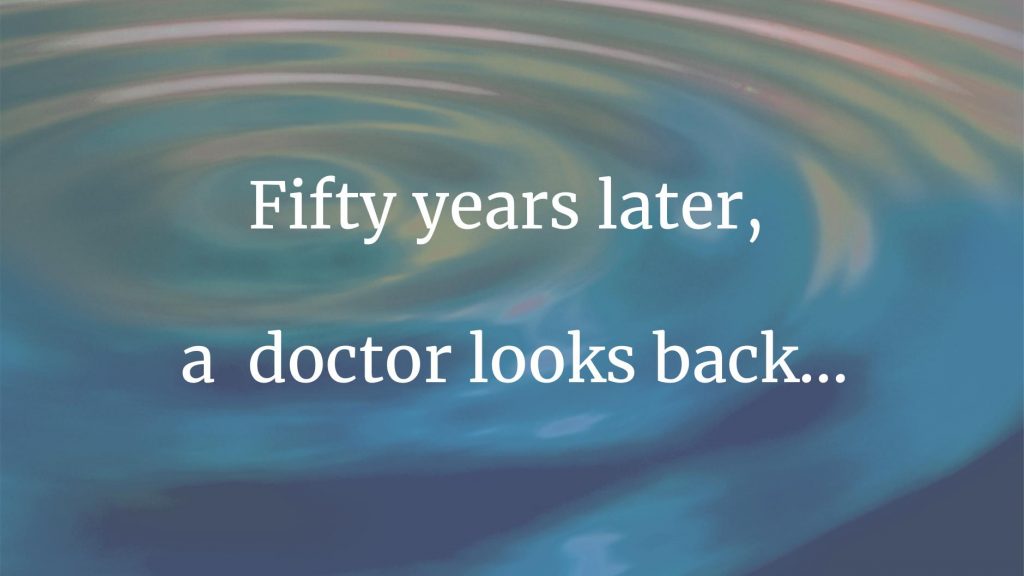 Retirement means downsizing. “If a thing doesn’t give you joy, throw it away,” says the current mantra, as if it were that simple.
In my study closet, behind my obsolete Kodachrome lecture slides (about as necessary these days as a harpsichord), sits my little black bag. Does it give me joy? It’s much more complicated than that.
The bag holds all the medical instruments I carried through my training as a doctor–internship, residency and fellowship: sphygmomanometer (no longer functional), stethoscope, ophthalmoscope, otoscope, reflex hammer. There’s also a moldy leatherette case containing the dissecting kit that I used in classes from college biology through gross anatomy. The instruments are still shiny and sharp, which is more than I can say for myself.
These tools enabled me to blindly climb a ladder that led from a Brooklyn high school to an upstate college, a Bronx medical school and finally the New York City hospital system.
Holding these implements again after a gap of fifty years, I realize that when I used them, I was just a boy. That boy could never have pictured this moment, half a century later. Now, cradling the past in my hands, I remember Faulkner’s words: “The past is never dead. It’s not even past.”
I became a child psychiatrist. Once my training was done, I had no need for the black bag or its contents. Why do I still remember them so vividly?
Perhaps because everything I did with them, I did for the first time. Everything was new.
Or was it perhaps the sense of hope and camaraderie I felt in becoming part of a tradition stretching back to Hippocrates, Asclepius and Maimonides? Or of joining in the struggle against the universe’s cruelties–poverty and its consequences in the poorest neighborhoods of Brooklyn and the South Bronx? Perhaps it was the shock of my first real encounter with mortality. Or my painstaking efforts to construct a caring, competent, ever hopeful doctor persona–to the point that I didn’t do medicine; it did me.
So much of my training as a doctor went into the little black bag. What else does it hold?
The fear of not measuring up. Of causing a death by failing to remember some detail from a textbook. The sadness over deaths I didn’t cause, but was involved in nonetheless (the agonizing attempted treatment of a teenage boy with unsurvivable electrical burns; the suicidal patient who should never have received a pass). That boy who was me used those dissecting instruments to pith countless frogs, then to cut up a dogfish shark, a turtle and a cat–a cat with four kittens in her uterus–and one fellow human being. How many creatures had to die for me to become a healer?
The anxiety during teaching rounds and board exams. The numbing, repetitive routine, the horror at the endless suffering we witnessed, at the pain inflicted by procedures done without safe, short-term anesthesia (not yet discovered). The sleepless exhaustion and nightly separation from a beloved wife and fellow clinician who has been with me through it all. The weariness that could turn compassion into self-pity, or anger at the suffering patients who made so much work–delirious patients who repeatedly pulled out their IVs, addicts discharged only to overdose again–and my guilt and shame over those emotions. The black humor that got me and my fellow clinicians through.
All of this was packed away into the little black bag.
Harbored there, too, is the knowledge that we doctors operate just beyond what is actually, provably known. That you can’t know all, love all and cure all. That loved ones, friends and family will sicken and die of maladies that we know all too well. That death can lurk in a patient’s history, in a simple dental procedure, a pregnancy, a child’s cough, a wife’s routine mammogram, a mother’s pathology report, a friend’s lab anomaly. After such knowledge, what forgiveness could be found? Of myself. Of the universe. Of any possible God.
It all went into the black bag.
The boy who was me joined classmates and friends to protest an unjust, pointless war. Fulfilling a silent vow to his childhood best friend, a beloved cousin who had intellectual disabilities, the boy trained in a poorly paid but richly rewarding subspecialty. And watched, helpless, as the profession he’d worked so hard to enter became increasingly corporate–an industry in which patients are a commodity.
The boy, having joined his classmates in making fun of the failures and foibles of his medical professors, became one himself, and experienced the joy of collaborating with like-minded colleagues. But he also experienced the petty departmental politics, the bored daydreaming at faculty meetings. Carting medical slides through airports on the way to conferences, all the while aching to be home.
More, so much more to be stowed in the black bag, which was already brimming with the boy’s anger at insurance firms and pharmaceutical companies, and above all with his sadness at managing incurable conditions in the people he treated and came to love.
The bag is heavy with its contents–the occasional elation of discovery, of lives saved or made better, but also, inevitably, all the fear, anxiety, anger, guilt and sadness of forty years of practice and teaching.
At the very bottom lies the knowledge that no matter how much I learned, I could do nothing for the cousin who’d inspired me. The knowledge that, in some way, my career grew out of his suffering.
The black bag reminds me of Pandora’s box–holding all of the earth’s ills, but also containing hope.

I once thought, like many doctors, that my defenses and despair must stay hidden within the little black bag. My generation of physicians was discouraged from expressing these emotions, as if doing so would harm our patients; even joy at a therapeutic success should be muted, to avoid raising false hope in our patients or ourselves. We were encouraged to believe that this was the price of becoming the omnipotent healers our patients required.

Gradually, though, I came to believe that we must discard this attitude. The cost is too high. To suppress our own pain is to forfeit our own humanity.

My work with persons with intellectual disabilities and autism-spectrum disorders inspired me to open the black bag–to move beyond dispensing medication, therapy and advice and to actively partner with my patients and their families and caregivers. To supportively share with them my own and my family’s anguish. To acknowledge the pain and doubt of our mutual enterprise. To help my patients and their families to challenge the deficiencies in the medical, educational and supportive systems that were supposed to help them.

Helping them to claim their agency also helped me to reclaim my own. I now believe that to avoid being overwhelmed by the feelings and experiences the black bag holds captive, we must talk about them.

The black bag needs to be–must be–the opposite of Pandora’s box, which released all of the world’s evils while keeping hope imprisoned within.

Today, for all of our sakes, hope must be set free, allowed to roam. Our patients need it. We need it.

We must open the black bag. And persevere.

Andrew Levitas is a retired professor of psychiatry and former medical director of the Center for Mental Health Treatment for Persons with Intellectual Disabilities, Rowan University School of Osteopathic Medicine, outside of Philadelphia. He was associate editor of Mental Health Aspects of Developmental Disabilities and an advisory board member and scholastic contributor to the Diagnostic Manual–Intellectual Disabilities: A Textbook and Clinical Guide for the Diagnosis of Mental Disorders in Persons with Intellectual Disability. He has one published novel, Alumni Notes. “I have from childhood been a devoted reader, always, everywhere, carrying a book. I wrote for my high-school and college newspapers and magazines and have been passionately involved with Homer and with modernist and post-modernist fiction. Writing is a way of keeping in touch with the world beyond the office and seeking experiences and insights beyond my own.”