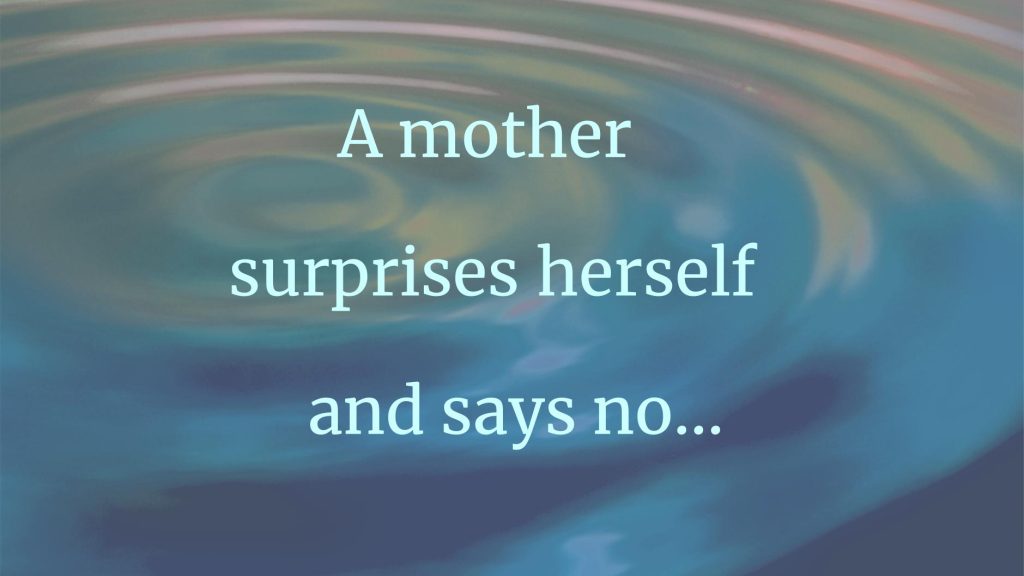 Seventeen days earlier, a discerning pediatrician had recommended tests to untangle my five-year-old son’s cluster of puzzling symptoms—headache, vomiting and double vision. The alarmed face of the radiation technician in the booth during the CT scan was my introduction to a world where I didn’t know the rules, the language or what was expected of me.

Ben had a brain tumor.

My husband and I pushed down our fears for our son, sadness for our family and anger at the universe to try to manage the situation as it unfolded. He needed immediate surgery. We were shocked, afterwards, by the creature in the recovery room that did not resemble the child we loved. A small, swollen face was dwarfed by a bulky gauze turban. Odd guttural sounds came from its mouth. A clear tube snaked away from the bandages

We sat vigil for a week as Ben slowly regained himself. Our voices joined the whispers of the other parents in the PICU, a lulling hum of sweet nothings directed at huddled bodies. “I love you.” “Everything will be all right.” “Shh. Shh. You’re okay.” After a few days, Ben answered back, his little voice cracked with disuse. “I love you too, mummy-daddy.” We counted the drops of pink-tinged fluid that dripped into the bag at the head of his bed. We learned that the tumor was malignant, and that even though it had been removed, he needed radiation.

On the eighth day, a second surgery placed a shunt in his head and a tube in his chest. The shunt helped his cerebral spinal fluid to circulate around the damage from the tumor and resection. The tube was to avoid all the needle sticks associated with his upcoming treatment. He returned to the PICU with a smaller turban, now, and no more skull tube. He looked more normal—more Ben-like—but he wept, speechless.

We wanted to help, but didn’t know how.

Tears rolled silently down his cheeks. The nurses thought that a change in scenery might cheer him up. The moment he was stable, they moved him to the regular pediatric ward. He was so sad that he wouldn’t speak to us.

I asked for a child psychologist to tell me how to lift his depression. After five minutes alone with Ben, gentle Dr. Scott told me, “Mrs. McMillan, it’s not that he is so sad that he won’t speak to you, but that he can’t speak, and so he is sad.”

Cerebellar mutism happens sometimes, when surgery involves the fourth ventricle, and there’s no predicting how long it will last, or if speech will ever return. We explained to Ben that his brain wasn’t working so well, but his words might come back later, and that meanwhile we would take care of him. We developed hand signals for pain. For food. For drink. For pee-pee. Ben calmed down, and we took a breath.

The immediate emergency was over.

The smells and strange noises of the ward became familiar. We learned that residents had short coats, experienced doctors had long coats, but that nurses did most of the talking. We drew a map of important locations: parking structures, hospital entrances, pediatrics floor hallways, the Parents’ Room (and secret kitchen), the cafeteria, gift shop and chapel. Margin notes told us opening and closing times, door pass codes and where to buy discount parking coupons.

After a few days, the nurses prepared us for discharge. The thin tube with two ends was curled up against Ben’s chest, held into place with a tube top of thin stretchy webbing. This would be used for blood draws, sedation and future chemotherapy. It entered his body through a small wound covered in sterile dressings that needed to be changed every day. My husband and I paid close attention to the instructions about maintaining a sterile field, having a clamp nearby in case of tube displacement or hemorrhage, and the intricacies of delicate skin that becomes irritated from constant contact with adhesive. Our neutral faces hid our growing misgivings.

The first job of parents is to love their children. The second is to protect them. We loved Ben and had done everything in our power to act on that love and demonstrate it to him. But protect him? That rug had been pulled out from under our feet. We hadn’t been able to shield him from cancer or keep him from pain and fear. And now they expected us to go home, care for him in this fragile state and usher him through the next steps of cancer treatment. We had no confidence in our ability to do right by our son.

“Here’s the plan,” said our kind oncologist on our last day. Dr. Wada stroked his scruffy beard, rubbed his tired eyes and rattled the papers in his hand. “We begin radiation one week from now. Ben will have a treatment every day for six weeks and start chemotherapy after that. Radiation appointments are every afternoon at 2:00 pm. And since he’s such a little guy, there will be sedation to keep him motionless. So he cannot eat or drink eight hours before each treatment.”

“Every day….Cannot eat or drink….” The words echoed inside me, bouncing against the remnants of my faith in myself as a parent. Then there was a tiny ping of sound. A little jolt of electricity. A small whoosh of energy. From the grim grey interior of me, a voice said, “No.”

I was as surprised as Dr. Wada and my husband when the word—bitingly short—hung in the air between us.

The good doctor continued, harrumphing a bit, saying something about “standard procedure.”

“Anesthesiologists…adult surgery schedule,” I heard. “Limited personnel.” I allowed him to keep talking while a pale pinprick of light inside me grew stronger. It illuminated a muscular compulsion to speak.

“This child is in fragile health and soon begins a year of chemotherapy,” I interrupted. “How can you expect him not to eat or drink, morning through afternoon—every day—for six weeks?” A cold fire, blue and dense—like dragon breath—flexed my will and fueled my words.

“Look me in the eye,” I told Dr. Wada, almost hissing, “and tell me that a radiation schedule that excludes eating and drinking for three-quarters of his waking hours is in the best interests of my child.”

“Ahem,” he said, seemingly at a loss. His eyes dropped to the papers.

My husband gripped my arm as if he thought I might spring forward, but in that same instant, Dr. Wada reached out and took my hand.

“You’re right, Mrs. McMillan. It doesn’t make sense. It looks like they plugged him into the schedule without thinking it through. I will talk to the department head and see what we can do.”

The dragon inside of me sat back on its haunches. I wasn’t triumphant–there was nothing about Ben’s situation worth celebrating–but I was satisfied with this small negotiation. More importantly, I had stumbled upon a new modus operandi: follow my instincts, be logical, speak up.

I’d found my new role: advocate for my child.

Hospital routine, it turns out, is adaptable in the face of mama dragons. Giant machines can be warmed up earlier, anesthesiologists can be found, children can be treated at the crack of dawn, before the adult surgeries begin. Forty-two times, while the world slept, I took my anxious young son to the hospital, where at 6:00 am the white coats took him from me and into the radiology suite. One day at a time, I regained my confidence, an appreciation for what I should do, what I could do for my child. Coiled, crouching, flicking my tail, I waited for them to bring him back to me. I held him—deep in drugged slumber, with dark lashes against soft cheeks, his dangling limbs draped against me—until he woke up, and we began the still early morning trek home.

Then the pale, bald, silent, sad little boy could eat scrambled eggs and coffee ice cream all day long while he watched Thomas the Tank Engine on television and dangled a piece of string over the edge of the couch for his kitty to play with and went pee-pee into a bottle until he learned to walk again.

Postscript: Ben is now thirty-two years old and lives with his parents. He has significant physical and cognitive impairment from his tumor and treatment, but is among the first generation of children to receive experimental treatment for medulloblastoma that has resulted in improved quality of life. He regained his speech, has a cochlear implant, works at a grocery store, builds Star Wars Lego sets and cares for the family cat.

Gianna McMillan is the associate director for the Bioethics Institute at Loyola Marymount University in Los Angeles. She teaches research ethics and sits on the FDA’s Pediatric Advisory Committee. Her son Ben’s diagnosis with brain cancer twenty-five years ago led her to become a patient/research subject advocate. “After two decades of ‘civilian’ advocacy, I went back to school. I have a doctorate in bioethics and am finishing an MFA in creative nonfiction. I have described Ben’s experience in academic and research settings, but with this story I explore the inner turmoil I experienced as his caregiver.”