It’s a rainy Thursday evening in our small inner-city practice. Today is the receptionist’s birthday, and I’ve been cordially invited to attend a small party prepared by her coworkers.

As I descend the green carpeted steps to the lounge, my aching muscles remind me about the torture session (otherwise known as “boxercise”) that I attended last night in my ongoing effort to get fit and control my weight. I still feel slightly resentful of Robert, the trainer; when he caught me slacking off during sit-ups, he embarrassed me in front of the class by making me repeat them.

Good job I didn’t tell him about those two slices of cake I ate last week….

I turn at the bottom of the stairs and enter the lounge. The tables are full; there’s something for every taste bud. For no apparent reason, while exchanging pleasantries with the staff members, I remember Daniel.

When Daniel visited our practice, he looked like so many others I’d seen. He wore a scruffy brown coat and tracksuit pants. There was also the faint aroma, neither pleasant nor unpleasant, of unwashed clothes. All part of the heroin addict’s “uniform.”

A pleasant-faced 23-year-old, he sat facing me. Though he’d come for a minor complaint, I chose to ask him more about his addictive behaviors.

Words and sentences tinged with tragedy spilled from the dry, cracked lips framing his otherwise delicate mouth. When his curtain of straight brown hair fell across his hazel eyes, he’d push it aside with an injection-scarred forearm, testament to his body’s ability to heal itself again and again and again.

But he knows what happens after he’s used. He starts to feel down again…he needs more. He needs it. Then come the schemes to raise the needed money–burglaries, muggings, but of what, and whom? And he knows the possible consequences: Maybe a return to prison.

Daniel talked about his family–his arguments with his mum and his brothers. He sometimes steals from his brothers; during their arguments, they hit him. He’ll leave the house, slamming the door, and just walk on and on. “No one cares…What’s the point?”

As he talked, I sensed a desperate cry for help from beneath his manipulative, deceitful behavior–unspoken words in need of a heart to hear them:

…You know, there’s a really good assortment of foods here. The pakoras and samosas and the sweets reflect our center’s rich mix of cultures. Again, I scan the tabletops.

I’m surprised at how big it is. People offer me slices, but I refuse. I remember my trainer. I remember sit-ups, torture, humiliation.

No–no cake for me. I couldn’t possibly face Robert afterwards, given all our talks about how deeply diet affects your weight and health. I’d feel like I’ve betrayed him–and myself.

I turn away and make more polite conversation. Outside it’s dark and raining, but here inside, it feels cozy. I’m aware, though, of a nagging unease….

With a will of their own, my eyes fix on the cake. I’ve lost control of my olfactory nerve as well: It’s tuned out everything but the warm, buttery smell.

I edge into the kitchen and pretend to try to fix the old cappuccino machine. The receptionist calls me back in.

“Have a slice,” she says invitingly.

Doesn’t she know how hard this is for me? I’ve told her a thousand times, I’m not supposed to eat sweets.

I guess she’s right. I’ll have a piece–just this once.

At the first bite, my taste buds light up. It feels like little fireworks going off in each one. And in the midst of this joy, I again remember Daniel.

I wonder what he’s doing. I wonder if he’s had another argument with his mum. I wonder if he walked down that alleyway, up the stone steps, into the room.

I picture him taking off his jacket, rolling up his sleeve, yanking the tourniquet tight with his teeth. How hard he’d worked for this moment–lying, stealing, fighting. Was he excited? Exhausted? What was he thinking? Did he remember any of our talk?

And then the injection. For now, his suffering would be over. His head would roll back, and his brown hair would curtain his eyes, but he wouldn’t care. He’d close his eyes and just enjoy the “bliss,” the freedom from his own suffering. He would be happy–until the next time. He’d excuse his actions with those valuable words “Just this once.”

My piece of cake is finished, and the party is drawing to a close. I say goodnight, gather up my coat and step outside.

It’s still drizzly, and very dark. Walking along hurriedly, I can taste the fragments of cake left between my teeth. I’m not sure how I’ll explain this to Robert…perhaps it’s best not to tell him.

My footsteps echo in the quiet road. My muscles still ache, and my inner monologue grows louder. All that hard work–and I’ve just eaten that damned cake! All those hours in the gym, all that telling-off by my trainer, and I still ate it. Can’t he see that I’m not to blame? It was the receptionist–I just made a mistake, that’s all…And I’m definitely not going to do it again!

But if I tell him, he’ll still yell at me; I know he will.

Again, I think of Daniel.

I realize that my transgression–eating a slice of chocolate cake–hardly compares to his wrongdoings. My actions hurt only myself; Daniel’s hurt not just him but so many others as well. Nevertheless, in this moment I feel a flash of sympathy. I understand how painful it is to resist when something calls to you so viscerally; I know how hard it is to walk away from something you crave. In that moment, it is the only truth. Rational thought seems to have no say.

The rain falls harder. Passing the highrise flats around the park, I see the young men loitering there in the cold darkness. Sadly, I think of Daniel and hear his unspoken words echoing once more in my mind:

Majid Khan is a general practitioner in Birmingham, UK. He works with substance abusers in prison and teaches communication skills at Warwick Medical School, where he is also in the process of setting up a course in mindful medical practice. Another of his stories has appeared in BJGP: British Journal of General Practitioners. Other personal interests include Buddhism, spirituality and mathematics. 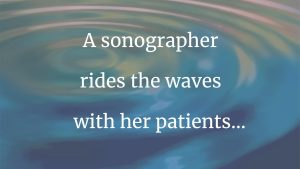