Jokes About Needles Are Probably Not Funny 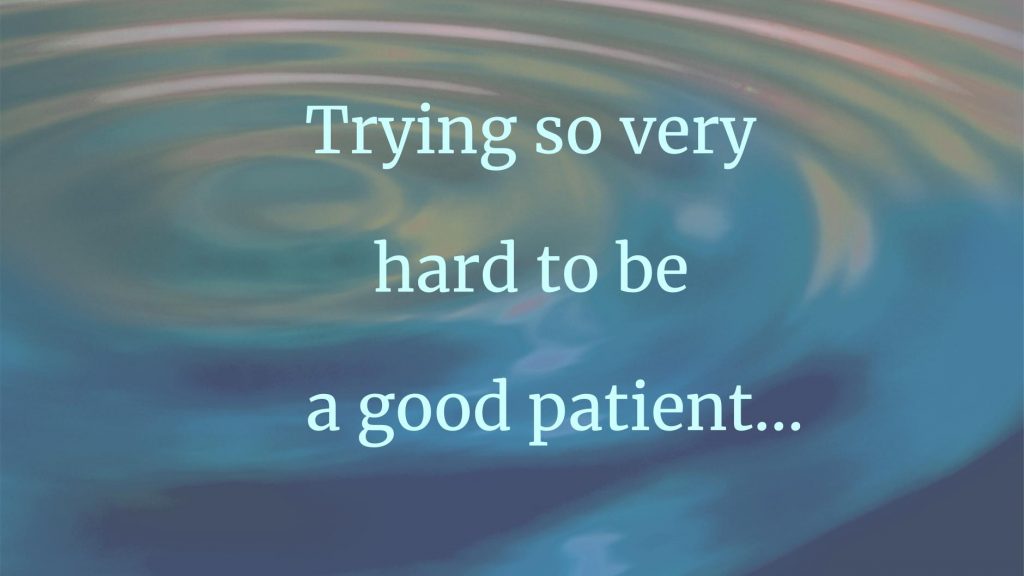 For the biopsy my doctor ordered, I am clad in a pink hospital gown, strapped into a chair and wheeled to a machine designed to press my breast into a flesh-panini, then stick it full of needles which, lidocaine or no lidocaine, I feel.

The pain is so intense I would gnaw my own breast off with my teeth to never feel such pain again.

“My hand is here if you need it,” one kind nurse says.

I’m embarrassed by how much I need it. I hold onto this lovely stranger like her hand is the only thing tethering me to my body.

“Try not to look,” she says, though my eyes are already shut. Behind my eyelids, the needles I imagine are, maybe, worse.

Years ago, my husband and I took our son Locklin to a superhero movie. There was a scene with a huge machine, a lot of needles. A character wanted power, immortality, and he allowed himself to be strapped to a table. Many needles came down, all loaded with super medicine. The character, an ordinary human, turned into something called Abomination.

He was six. Probably not great parenting, in retrospect, but still.

He’s been terrified of doctors and needles ever since.

Abomination. What a word.

This machine I’m not looking at–I don’t know how it would seem in a movie, but I’m pretty sure terrifying. The sound alone is otherworldly, hydraulic. My mouth tastes metallic. Everything smells too clean, all rubbing alcohol and bleach and ether.

“Don’t look,” another nurse says as I go on squeezing the first nurse’s hand.

“Just relax,” one of the techs says.

There are only two techs in the room, both men. I love men, but their presence here seems off, the focus being breasts and all. The techs seem intent on the machinery, their voices farther away, disembodied. I’m sure if I opened my eyes, I’d see that they’re kind, too, but I keep my eyes closed. I squeeze the hand of the nurse, who I love so much in this moment I want to weep, and maybe I do a little, I’m not sure.

“You need to hold still,” one of the men says. He sounds annoyed but professional.

The other makes his voice soft. “Try not to move. Just breathe.”

I want to say, “But breathing means moving.”

I want to be tough and kind, funny enough to make the techs and nurses like me, because if they like me even a little, they might be gentler. I want to tell them how I didn’t cry, not once, when I was in labor with my son, then my daughter. I want them to know that I’m a reasonable person, smart, mostly unflappable—that this moment is an exception. I want to say please and I’m sorry and my mother was a nurse and I want to be a good patient, the best patient, I know how, please, if I could have a minute, please, sorry sorry.

The pain is so bad it seems unbearable, though I know so many unbearable things in the end are bearable.

I want to believe the techs are trying for gentle. I am trying to love them the way I love the nurses.   The nurses keep talking.

“Let me know if you feel woozy.”

The nurse with her hand in mine tells me a story—how she’s afraid to drive, ever since her accident.

She was seven months pregnant with her daughter. She had to be pulled from her car—cut from the steel. Her daughter is fine now, four years old. The nurse is fine.

“I feel it every time I get in a car,” she says, about terror. “It’s something you can’t get over, maybe.”

She says, “I don’t want to pass my fear to my daughter.”

She says, “We pass our fears on, maybe, no matter what,” which is true and serious, but she laughs, and her laughter sounds like fluttering birds.

“We need to go in again,” one tech says, as if he’s drilling for fissures in rock. I want to say no, please.

I don’t think I say anything. I hope I don’t. I want to be a good patient, the best patient. I try breathing. Five-count breaths. Deep inhales, deep exhales.

The men ask me about my children, their ages, and I answer. Seventeen. Fourteen. Son. Daughter. Yes, I am looking forward to their futures. Yes, I am their mother—a reason to go through this; a reason to hold still and be good.

My son is graduating from high school later today, yes.

Yes, I am glad I will see that.

I think of my son, in his green graduation gown, singing his alma mater, which was my alma mater long ago: “Years from now we will all recall fond memories of these days.”

I think of my son running for the theater exit, all those needles coming down, abomination.

“Try to think of this like a champagne cork popping,” one tech says as more needles—many needles maybe, so many needles—press down again, again.

I keep my eyes closed. I try not to see or count the needles in my mind.

The pressure feels like my nipple popping off–a party popper, something that should spew confetti but feels like it’s spewing blood.

I open my eyes, but it doesn’t matter. The room shrinks, like a camera lens closing.

I think about party poppers, the confetti I vacuumed up, the confetti that kept showing up weeks or years after birthdays, and now my son’s graduation. So much life left to celebrate.

Yes, I want to be healthy.

“I’m not sure the lidocaine is working,” I say again, and my voice sounds lucid but far away, not mine.

“We gave you two shots,” one tech says. “You shouldn’t feel a thing.”

“Hang in there, mom,” says the other.

When the procedure is over, the nurses wheel me away from the machine. They loosen the straps, the sound of Velcro tearing.

I think I thank them. I think I tell them to have a good day. I don’t feel a thing when I collapse, though I remember promising the techs and nurses I wouldn’t drop on them.

Before the room goes dark, I think I make an Abomination joke: “Amomination…Get it? A mom.”

I think I apologize. For the joke, for being so much trouble, for causing a fuss.

“Grace under pressure,” my beloved Hemingway used to say.

I want that. A little grace. I want to hold onto whatever dignity I have left, exposed as I am in this pink hospital gown, in front of these strangers who’ve seen what no one in my family has seen—how afraid I am, how weak, how human.

Lori Jakiela is the author of several books, including the award-winning memoir Belief Is Its Own Kind of Truth, Maybe. She directs the undergraduate creative and professional writing program at The University of Pittsburgh’s Greensburg campus. This piece is a chapter in her latest nonfiction manuscript, Say You Want to Live and Be Beautiful. Her next book, How Do You Like It Now, Gentlemen? Poems from Midlife, is forthcoming this fall from Brickhouse Books. Her website is lorijakiela.net. “Writing helps me find order and meaning when I feel helpless. Moving words around a page gives me purpose and, in the best of times, peace. In the past few years, I was diagnosed with breast cancer and had a double mastectomy and reconstruction. I wrote to make sense of that, to face the experience head on and find meaning and purpose there. Most of all, I write to connect with others who may have had similar experiences. Writing, for me, makes the world less lonely.”

12 thoughts on “Jokes About Needles Are Probably Not Funny”