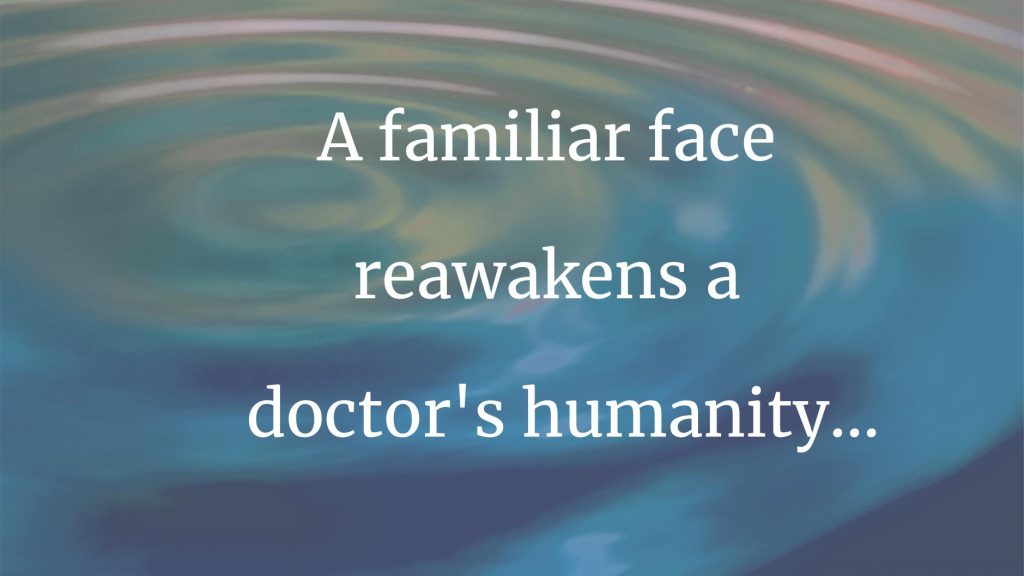 As a pulmonary and critical-care medicine fellow, I care for patients with a broad variety of respiratory ailments. But little did I know, as I examined my patient Mr. Smith in the outpatient pulmonary clinic this past winter, that I’d see him again only months later as my first patient with COVID-19.

Mr. Smith was tough as nails. A stoic retired steelworker and former smoker, he suffered from significant emphysema, but was inclined–by nature and by necessity–to fight through his symptoms with limited medical help.

During that December visit, his wife reported that he was getting breathless during everyday tasks such as walking upstairs while carrying laundry.

“He’s not using his inhalers,” she said anxiously. “They cost too much.”

Mr. Smith shushed her. At my request, he did a walk test up and down the hallway. His blood-oxygen level dropped to the mid 80s, which qualified him for oxygen supplementation at home.

“Could you deliver that oxygen today?” she asked. Her husband, increasingly short of breath, hadn’t been able to get out of bed all week. This was alarming.

She was reluctant: “He doesn’t want to go to the ER, because he might be exposed to the virus.”

That evening, she bought a pulse oximeter at the drugstore and tested Mr. Smith’s blood-oxygen level. Now it was 70 percent.

Finally, he agreed to go to the ER. He tested positive for COVID-19 and was admitted to the medical intensive-care unit (MICU).

A few days later, I arrived there to work. It was my first overnight shift since the pandemic had begun.

Critical-care physicians pride ourselves on handling a wide array of acute diseases as needed. But tonight’s hand-off report contained just a single diagnosis, repeated over and over: “Acute Respiratory Distress Syndrome from COVID-19.”

As each patient was described to me, they all began to sound the same: Middle-aged adults, some with medical comorbidities, presenting with respiratory distress and spiking fevers. Their chest imaging showed lower-lung opacities. All were intubated and on ventilators and had been placed prone in bed to help them breathe more easily. All had tested positive for COVID-19.

My first glimpse of the MICU was startling. Within a matter of days, the open twenty-four-bed unit had been transformed into two “biodomes”–biocontainment zones enveloping the patient rooms. “Donning and doffing” areas had been constructed where healthcare workers could put on and remove personal protective equipment–gowns, gloves and hoods with powered air-purifying respirators (PAPR). Once inside the biodome, I discovered, the hoods’ constant whirring made it hard to hear my colleagues speak. The glass doors to the patients’ rooms, normally open, were closed, and no family members were allowed. To decrease our risk of infection, we were told to minimize our time with the patients.

The apprehension in the air was palpable.

“We’re the medical ICU, and we can handle anything,” said the charge nurse firmly. But it was hard to forget that, as healthcare workers, we ourselves faced a higher risk of contracting COVID-19.

My thoughts flashed to a meeting earlier that week, when a faculty member had asked the question we all were thinking: “What’s going to happen when one of us becomes critically ill?”

Physicians are drilled to provide excellent clinical care, and through long hours and years of training, we’re taught that bearing witness to our patients’ experiences and emotions is a rare privilege. In the service of those principles, our mentors strive to model a spirit of fearless self-sacrifice.

Rounding on patient after patient, I felt those principles disintegrating under the pressure of the environmental precautions, the patients’ near-identical presentations and our fears for our safety. It struck me that COVID-19 was not only causing critical illness; it was also dehumanizing our patient care.

As I saw one patient after another in respiratory failure, I felt my caregiving becoming robotic. My perceptions of my patients narrowed down to their ventilator settings:

I’d known that he was here, but seeing him like this–intubated, unable to communicate, deeply sedated, prone–was a shock. I barely recognized him.

Concealed under my PAPR hood, I felt tears welling up as I remembered Mrs. Smith’s words after she’d taken her husband to the ER.

“When I dropped him off, he asked, ‘Why can’t you come with me?’ ” she said sadly. “Please take good care of him, because I can’t be there for him.”

I reminded myself that for every critically ill patient in this ICU, there was a Mr. or Mrs. Smith at home, anxiously waiting by the phone. Mrs. Smith’s words reminded me that despite the surreal MICU biosphere surrounding me, I was the same physician I’d always been.

I still have the ability to care wholeheartedly for my patients, I reassured myself.

As we continued, I turned my full attention to the task of focusing on each patient’s details. Listening more deeply, I felt the stirrings of a familiar inner process: In each patient, I found traits that reminded me of people in my own life. There was a businessman who loved to travel, like my father-in-law; and an older woman who, despite her high-flow nasal cannula, retained a sunny disposition that reminded me of my grandmother. Finally, there was a young man not unlike my husband, who told his wife “I love you” just before he was to be intubated. I felt called back to myself.

We were never able to get Mr. Smith off of the ventilator. After several weeks, Mrs. Smith finally made the decision to transition him to comfort care–to extubate him and allow him to die peacefully. Discussing the decision by telephone, we cried together and agreed that Mr. Smith would never have wanted to stay reliant on a ventilator long-term.

She thanked me for caring for her husband, then added, “You know, he always liked you.”

“I’m the one who’s thankful,” I told her–and that was the honest truth.

Amid the horror of COVID-19, caring for Mr. Smith helped to remind me what being a doctor is all about.

Sandy Zaeh is a pulmonary and critical-care medicine fellow at Johns Hopkins University School of Medicine in Baltimore, MD. “I first developed my love of writing as a child. Writing allows me to process my experiences as a physician and to connect more deeply with my patients. I would like to thank Ira Leeds, David Baumgarten and Stef Reiff for providing input on this story.”

PrevPreviousThis Is Why
NextSome of the Hardest WeeksNext

4 thoughts on “In the Biodome”