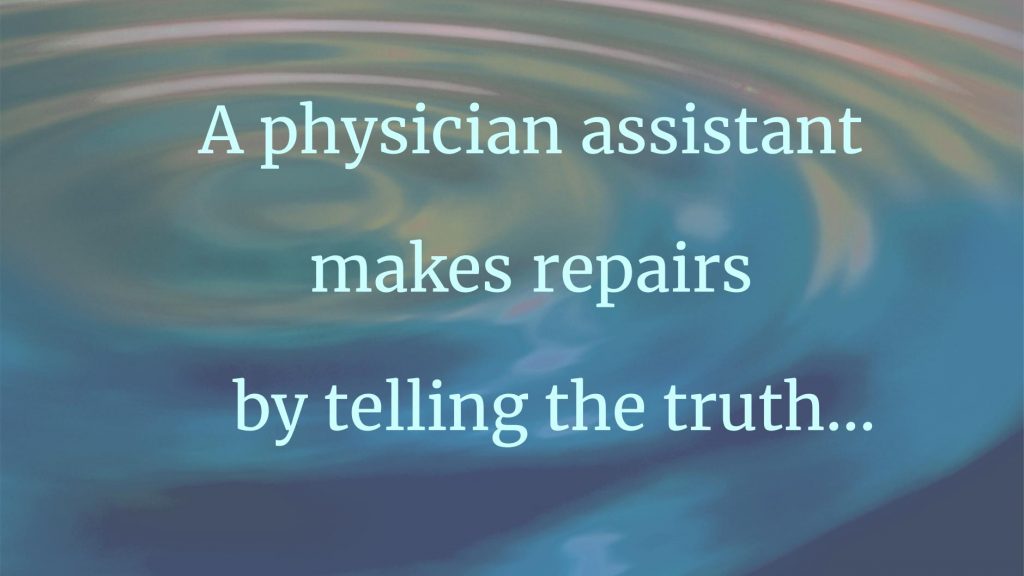 From the computer screen a few inches away, Oliver’s honey-brown eyes gazed into mine in the unadulterated way that only children’s eyes can, matching the directness of his question:

The truth—”I don’t know”—felt inadequate as a reply to a five-year-old desperately grasping for any kind of certainty. The awkward silence of this Zoom family meeting made it clear that his parents, like me, had no answer. I wracked my brain for the right words. There were none.

You’d think I’d be better at talking about death by now, I reflected. As a physician assistant in geriatric primary care who visits homebound patients, I’d had many difficult prognostic conversations, but never with someone so young.

Oliver wanted to know if my patient, his grandpa, who’d contracted COVID, was going to make it.

I had no idea.

I thought of a text my mom had sent me about her own mother a year ago, right when I was taking my national certification exam.

I think something is happening with Grandma. Please call me when you can.

I’d called my mom right after I left the classroom.

“She fell last week,” she told me. “You know your uncle’s been taking care of her in Switzerland. Her arm is really swollen, and he’s wondering if it could be a blood clot.”

“Last week?!” Anxious questions filled my mind: How long has her arm been swollen? Has the clot traveled? Why am I only hearing about this now?

“It could definitely be a clot. Has she seen a doctor?”

“There’s a nurse who comes to give her morphine and sees her every week—but no, I don’t think she’s seen a doctor.”

“She fell last week, and her arm swelled up, but she didn’t see a doctor, and her only medical care is a nurse coming to give her morphine?”

“It sure sounds like she’s on hospice to me.”

“I wish I’d known.” In my mind, I was entitled to know. I was her granddaughter.

“I didn’t know myself until just now. She’s so far away. Your grandma’s always been a very private person.”

“It could definitely be a blood clot, and she should definitely see a doctor, if you want to treat it. But it sounds like they’re not treating it because she’s on hospice. And I wish I’d known.”

Even as I felt aggrieved, I knew I had no right to feel that way. I hadn’t stayed close to my mom’s mom; I hadn’t visited her in Switzerland for almost a decade.

I hung up, wondering if I should fly to Switzerland to see my grandma, taking for granted (in that pre-pandemic world) the ability to fly almost anywhere at will.

Two days later, she died. At ninety-six, she’d lived a long life; her death shouldn’t have come as a surprise. Yet I wished someone had warned me. My regret was sudden and merciless: I cried for a surprisingly long time, wishing I’d invested more in her, now that she was gone.

I also wondered how my mom must feel. Grandma had liked to keep her life shrouded in mystery, and she’d left both of us with many questions—one of which, my mom had confided, had haunted her since she was a small girl.

From the time they were babies, my mom and her older sister Helen had slept in the same bed. As toddlers, they’d played patty-cake and eaten all of their meals together, along with their two younger brothers. Then one day, when Mom was four, Helen disappeared. No one explained where she went, or why.

What Mom didn’t understand at the time was the significance of Helen’s small ears and flattened facial features, of the little white flecks in her irises that looked like glitter to my mom’s toddler eyes. She didn’t know that Helen had Down syndrome, let alone why that would make her parents decide to send Helen to a home for disabled children.

Even two decades later, when Mom looked at an old photo and recognized Helen’s condition, she still didn’t understand why she’d had to lose her. The question gnawed at her, but she was too deferential to press her parents for answers. She launched her own investigation, finally tracing Helen to a home for the disabled in Amsterdam, where, Mom learned, Helen had died at seventeen, on the threshold of adulthood.

Near the end of Grandma’s life, Mom worked up the courage to ask, “Why did you send Helen away?”

All Grandma could say was that it was just too much. They couldn’t take care of Helen along with their three other children. They weren’t equipped for how much care she required.

Her words echoed in my mind now, as I looked into Oliver’s eyes. I didn’t want him to have any unanswered questions about what was happening now.

“Oliver, I don’t know what’s going to happen to your grandpa,” I said. “He might get through this okay, but he might not.”

Oliver cried. I did my best to breathe. Then I got an idea.

“Oliver, what would you do differently if you knew he was going to die?”

His glistening eyes widened in earnest consideration. “I’d, um, I’d talk to him and sing to him every day and—and make him cards. And do whatever things I can to help him feel better.”

“Those are really good ideas,” I said, smiling despite everything. “Why don’t you do those things anyway?”

Oliver nodded. His mom wrapped her arms around him. They stood there in silence, holding each other for what seemed like a long time, neither wanting to let go.

Seeing their fear brought a familiar pang of vicarious pain—but only for a moment. After that came a release of tension, as though with the pang a heavy weight had dropped down from my chest straight through and out of me. Now, whatever happened, Oliver would have the opportunity to say goodbye—one that my mother wished she’d had with her sister, and that we both wished we’d had with my grandmother. Knowing this, I knew that telling him the truth was the right decision.

In the end, Oliver’s grandfather actually survived COVID-19. After two months virus-free, he graduated from hospice.

That phrase used to seem like a euphemism to me, but now it feels right. Graduation means passing from one stage of experience to a higher one. When my grandmother passed away, I graduated into newfound appreciation for her, for the challenges she faced—and for the value of honesty, even in the face of difficult truths.

Sara Lynne Wright works as a physician assistant in geriatric primary care at Stanford Health Care. She majored in English and American literature and language at Harvard College and worked in TV and in film writing and production before her career switch to health care. “I believe that storytelling is as important to healthcare as it is to entertainment.” Her pieces have appeared in Stanford Medicine’s blog Scope and in the spring 2018 and spring 2019 editions of Stanford Medicine’s literary magazine Anastomosis. “I’d like to express my gratitude to all involved in Laurel Braitman’s Writing Medicine workshop for inspiring me to keep writing even while practicing medicine.”