Virginia is sweet. And I don’t mean that in a patronizing, “Isn’t she cute and sweet in her neediness and cluelessness” kind of way. You can tell that she has always been a warm and inviting person, and that she likes people. And today, I need sweet.

As an Adult Protective Services (APS) social worker, I’ve had quite a week among the belligerent abusers, the angry hoarders and the adult children unwilling to help their aging parents who are living in squalor. So I am thrilled that my new client, Virginia, is sweet.

Virginia came in as a financial-exploitation case. Apparently some men had bilked her out of $25,000, promising that in exchange they would cut down some trees in her yard. When she told her church friends how thankful she was and showed them the empty yard, her friends called us, because no one remembered seeing any trees there in the first place.

Virginia puts her hand on mine as she talks, smiling and looking attentive. Her sea-blue, cataract-filmed eyes are inviting, but it’s clear that they don’t quite take everything in.

She has asked me into her lovely home without listening to my explanation as to why I’m here. Except for the exterior, with its overgrown ivy and peeling paint, her house is immaculate–freshly cleaned and vacuumed, lightly scented with peach potpourri. The walls are a pretty rose color, and the coffee table holds House Beautiful magazines perfectly splayed in chronological order.

I sit down on a tufted, cream-colored Queen Anne sofa.

Virginia has been humming an Elvis tune; she stops for a moment to ask, “Would you like some coffee?” I can smell it brewing in the kitchen.

I look at her and smile gently.

“Perhaps you should put on some clothes first,” I suggest.

She’d greeted me at the door completely naked except for one tube sock. The sock indicates that she’d started to get dressed, then forgot to finish. I am glad that it was I who came to her door and not someone else.

She looks puzzled when I mention her nakedness, but she is pleasant as I go into her bedroom and pull out a perfectly folded purple velour tracksuit and undergarments from a dresser drawer.

When she doesn’t respond, I gather that I need to help her. As I put her arms through the bra straps, she asks if it’s cold outside.

“Yep, it’s pretty cold,” I remark, waiting for her to remember the next step in getting dressed. She doesn’t, so I have to get more invasive than I’d like: I make breast-lifting motions and ask her to put her breasts into each of the bra cups. As she does so, she remarks, “I’m not one much for the cold, I like summers better.”

She just stands there, still humming, so I fasten the three hooks of her bra. I see her vertebrae sticking out like dinosaur spikes, and I wonder if, or what, she’s been eating.

I hand Virginia her teeth, which are soaking in a jar, and she puts them in.

She touches her hair and hands me a polished silver-plated brush. This is apparently the next step in the hygiene routine that somehow got interrupted. I start brushing her white, shoulder-length tresses. With every stroke, she closes her eyes, smiles and leans back into the brush.

I wonder who brushed Virginia’s hair before. Her husband, who passed away fifteen years ago? Her sister, who apparently is in a nursing home now herself? Her estranged daughter, now living in Cleveland? Maybe she thinks she’s getting shampooed and treated to a nice day at a salon.

We sit in silent conversation together, and I brush her hair much longer than it really needs. When I’m done, I pat her head gently.

Clearly Virginia is in the throes of Alzheimer’s or some other dementia. I wonder if she has enough money for aide service so that she can remain in her home. Or if she would fare all right in a nursing home that would smell far worse than this lovely house.

As I look at the vacuumed floor and smell the peach potpourri, I think about how strange and arbitrary dementia can be: Virginia has retained her skills in some areas, like housekeeping, but not in others, like safety and self-care.

My mind wanders for a moment, and I visualize the Swiss-cheese-looking postmortem brain slides from deceased patients with Alzheimer’s. I imagine how it is for Virginia, trying to think through those holes in her brain. I know that the disease process will be cruel–that as those holes get bigger, she will at some point become incontinent and unable to communicate. In the later stages, it sometimes seems as if people are just in death’s waiting room, biding their time in some wonderland hell of Swiss-cheese dreams.

Virginia reaches out and touches my hand, and I am reminded that she is not there yet; she’s still present with me. I put my hand on hers.

Now that she’s dressed, I need to complete my assessment of her level of functioning in order to figure out what to do next with her. I start by checking whether she is oriented to person, place and time.

She knows her name and where she is, but cannot remember the date.

I realize that I have no idea what the date is, either.

I decide to forgo any more mini-mental evaluations. Instead, I ask the more pragmatic questions that we pose in APS.

“Virginia, if there was a fire in your kitchen, what would you do?”

“Um, I’d probably do something,” she responds.

“Any idea what you would do?”

My heart sinks. Instinctively I put my hand on my chest, thinking, That’s what everyone wants to do, even if we can’t.

“Oh, Virginia,” I say, trying not to sound patronizing. “You’re ninety-three years old; I believe that your mom is no longer around.”

“I think that she might be dead,” I say matter-of-factly, hoping to temper her loss a bit by helping her to remember it as a fact that she’d forgotten, and not a new development.

“Then I guess she won’t answer when I call, huh?” she asks, her brows furrowed in earnest disappointment.

Stunned, I nearly fall off my chair. Even knowing that she has dementia, I’m caught off guard by her words–by their utter disconnect from reality.

I gather myself, smile and formulate a plan for sweet, sweet Virginia.

Since Virginia did not have the capacity to make major decisions regarding herself and her finances, I worked with the County attorney to petition the court to appoint a guardian for Virginia. The guardian was able to sell her house quickly to pay for a nice assisted-living facility. There Virginia continued to cordially host church friends, and the aides patiently brushed out her hair; she died a year and a half later of metastatic gynecological cancer. (It was never clear whether her cognitive decline stemmed from Alzheimer’s or brain metastases.) At the encouragement of the hospice staff, her estranged daughter returned and was with Virginia when she died.

Liat Katz is a licensed clinical social worker who has published pieces in Lilith and Washingtonian Magazine. An alumna of New Directions, a three-year postgraduate writing program offered by the Washington Center for Psychoanalysis, she has just edited an edition of their literary magazine. “I write to honor the clients I’ve had the pleasure to work with over many years in my social-service positions. They have let me into their lives at their most vulnerable moments and, in turn, have let me into my own life. I write to make sense of the world I see through the lens of a clinician, a patient, a mom and a person just muddling through life.” Liat lives in Rockville, MD, with her wife, two daughters, two cats and two bunnies. 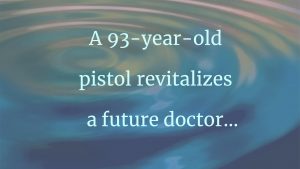 Out of the Blue

It Takes a Tokyo Village