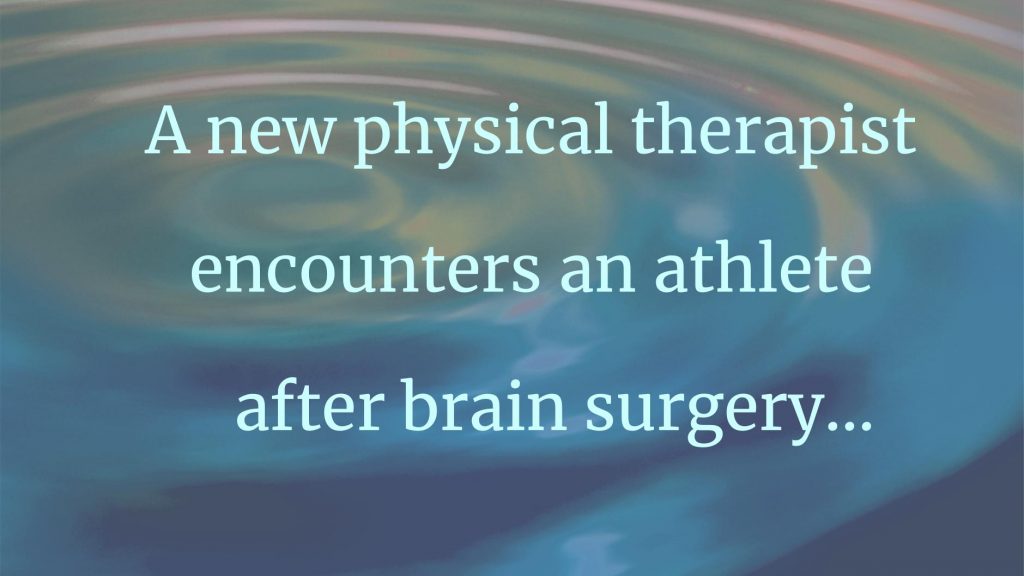 I was twenty-eight when I first walked into Matthew’s room in the neurosurgery ward at the university medical center. A newly graduated physical therapist, I was working at my first job in the field. I was there to evaluate Matthew for physical therapy, and I had all the right gear–a white lab coat, running shoes, a stethoscope, a clipboard and a goniometer (an instrument that measures joint angles)–and an enthusiastic desire to help this young man function normally.

Matthew’s handwritten hospital chart said, “Twenty-year-old male, status post cerebellar surgery.” As a college sophomore he’d been diagnosed with a tumor in the cerebellum, the back of the brain. Fortunately, it was benign, and he was now recovering from the successful operation to remove it. His curly brown hair, shaved in back, revealed the sutured incision running down to his neck.

The cerebellum (“little brain” in Latin) governs motor skills and posture. I knew that Matthew would likely have the “cerebellar signs” associated with its damage–poor balance, tremor and lack of coordination. During this initial evaluation I needed to test for all those problems.

“Okay, Matthew,” I said to the smiling young man who sat teetering on the edge of his hospital bed. “I’d like you to touch the tip of my finger.”

Holding up my index finger in front of my face, I bent close to him as he took aim. Suddenly, his forefinger jerked past my hand and directly into my eye. My contact lens popped out.

“I’m so sorry!” he said over and over while, on hands and knees, I retrieved the tiny, clear disc from the floor. Getting to my feet, I cleaned off the lens and reinserted it, trying to regain my composure.

Clearly, Matthew was experiencing the expected motor difficulties. Although he was an athlete, tall and brawny, his stability and agility were those of an old man. But I felt confident that he’d benefit from the mats, large therapy balls and mirrors in our physical-therapy department.

For the next few weeks, we worked together every day. One exercise for balance required us to kneel side by side as Matthew shifted his weight toward and away from me and gently bumped his hip into mine. The move resembled the Bump, a dance craze at the time.

“John Travolta has nothing on me!” he quipped. This kid could make me laugh.

In another exercise, he sat on a big vinyl ball, rolling back and forth while I held his hands for support. I had him lean toward me as my hands pressed against his arms and shoulders to steady his shaking and retrain his balance. I may have noticed a sparkle in his eye at these moments, but I pushed aside the thought that he might have a crush on me and focused on helping him.

Matthew progressed quickly. Three weeks after surgery, he was discharged to his parents’ suburban home to continue treatment at an outpatient clinic. His medical team–the surgeon, nurses, social worker and I–were overjoyed to see Matthew walk unassisted, his mother and father by his side, into the elevator and back into his world. Watching the doors shut, I imagined his future holding college, sports and girlfriends.

Soon I got a letter from him. His handwriting, although slightly wobbly, was completely legible:

I miss you and our sessions. I want to thank you for being so motivating and helpful to me. I’m walking two miles a day now, and hope to go back to school in the fall.

Relieved that he’d recovered so completely, I put his message on my to-do pile, intending to reply. Yet somehow there was always something more pressing. I was employed full-time and putting in extra hours to cover rent on my one-bedroom apartment and pay back my student loans. Making new friends added to the excitement of being single in a new city. The longer Matthew’s letter languished on my desk, the harder it was to answer.

One day as I entered the neuro ward, the head nurse invited me into her office. She asked me to sit down and, gently touching my shoulder, handed me a letter from Matthew’s mother:

Matthew was doing so well physically. He was pretty much back to normal in that regard. We were hoping he would return to college. But he started suffering from severe depression–something new for him. Unable to manage it, Matthew took his life by hanging. We want to thank all of you who were so committed to our son.

I felt as if I’d fallen into an abyss. The shock of it took my breath away, as if I’d been slammed in the stomach.

Then I remembered Matthew’s note, still sitting on my desk. Overcome with remorse, I kept asking myself, Would it have made a difference if I’d responded? I wondered if my ignoring his letter had put him over the edge. Could the simple act of mailing a letter have prevented his death?

Some days, I’m convinced that I should have done more. Yet I try to reassure myself that I was only one factor in his life. He had caring parents and many people who worked hard to help him mend. I played only a small part in his recovery.

I remind myself that, back then, the cerebellum was known mainly for its role in motor control. Only years later did neuroscientists discover that the “little brain” also plays a role in depression and impulsivity. That knowledge came too late for Matthew–and for me, as his caregiver.

His death has impacted me in many ways. Before, I’d maintained a professional distance from my patients. Now I saw that this “objectivity” couldn’t protect me; despite my attempts to remain aloof, I’d developed a bond with Matthew. Ever since, I’ve encountered patients, both adults and children, who have moved me deeply as I’ve watched them struggle and succeed, or struggle and die. The challenge for my own “little brain” is to find a way to love people and still accept the occasional failures that are inevitable when you try to help others. It’s something I grapple with not only in my job, but in my life.

I’ve realized, too that success and failure aren’t always clear-cut. Matthew’s caregivers successfully cured him of the tumor and his resulting physical disabilities; yet we failed to heal the emotional ravages caused by the mass and its removal.

I will always regret not being able to help Matthew more. But I have had a second chance. Now, in teaching neuroanatomy to medical students, I instruct them in all of the cerebellum’s many roles. I picture Matthew’s smile as I explain how to test for coordination–carefully, keeping your hand away from your face, to avoid a finger in the eye. I recall his mother’s letter as I caution them about what can happen when important cerebellar functions are overlooked.

Because of Matthew, my students will know to watch for psychological symptoms in patients with cerebellar disorders. I sincerely hope that they will use this knowledge not only to cure their patients’ physical disease, but to heal their mental distress as well.

Matthew lives on through his influence on my teaching, multiplied by each of these future doctors–and I take solace in that.

Elizabeth Pimentel was an adjunct lecturer in neuroanatomy at the City University of New York Medical School until the pandemic hit. “For thirty-five years I’ve honed my writing skills by preparing lectures that are understandable, concise and engaging for students of physical therapy, occupational therapy and medicine. When I became an empty-nester five years ago, I started writing personal essays to find closure in unresolved issues, hoping that others might be able to relate. As a freelance writer, I’ve been published in The Washington Post and elsewhere. I’m currently working on a memoir about driving a cab in the 1970s.”

PrevPreviousGrieving in the Age of Zoom
NextThe Things We CarryNext

9 thoughts on “Healing the Little Brain”