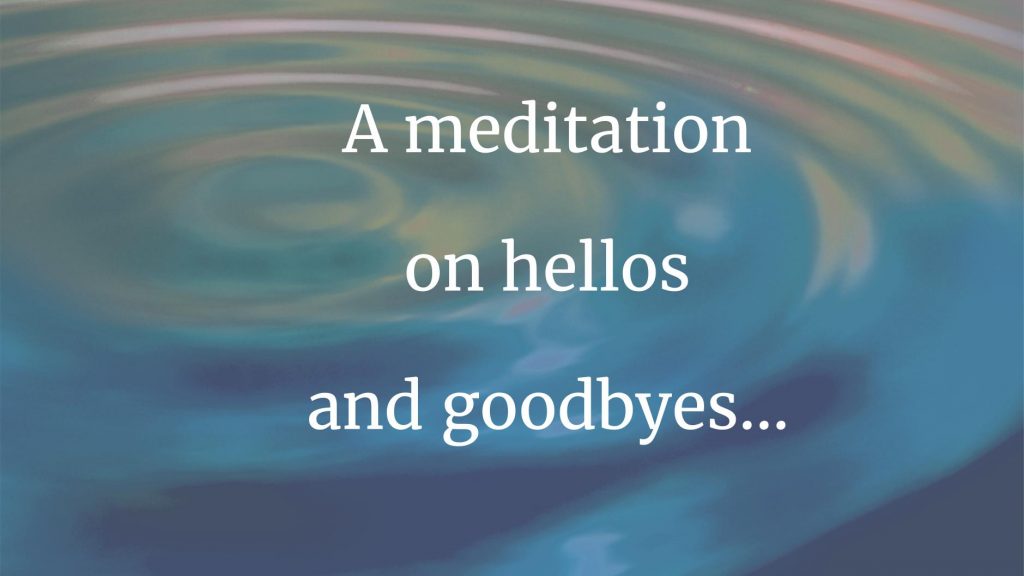 I have seen tribesmen in the West African country of Mali meet each other on a narrow dirt path and stop to spend several minutes chanting highly scripted greetings. When they part, shortly afterwards, there is an equally elaborate farewell.

As a psychiatrist and medical educator, I’ve seen my colleagues carrying out a parallel ritual: Two doctors hurriedly passing each other in a hospital hallway and cheerily but tersely saying, “How are you?”–neither slowing down to hear the other’s response. The greeting is equally formalized; it’s just shorter.
Over many decades as a physician, I’ve become keenly aware of just how significant greetings and farewells can be. They can open up or summarily cut off meaningful communication.
For instance, when my cherished primary-care physician asks, “How are your symptoms lately?”, she efficiently elicits information about my perceived bodily functions. But I sometimes wish that she would lean forward and ask, simply, “How are you?” This would open the way for me to tell her about the important issues in my life, not only my physical symptoms.
I realize that there’s not always time to listen to a lengthy reply. That’s why, when hastily passing an acquaintance in the hallway, I won’t say “How are you?” but rather, “Nice to see you.” Similarly, when I would greet a patient, I’d take great care always to say “Hello” rather than “How are you?” I feel that if I do inquire about how someone is faring, I need to be able to take the time to listen to a real response.
I’ve seen physicians use various opening gambits, from the open-ended, sympathetic “What’s wrong?” to the curt, accusatory “What’s bothering you now?” The latter clearly reflects the doctor’s wish to save time by dispensing with formalities. I understand that wish–physicians’ time is a precious commodity–but it’s my sense that this greeting pressures the patient to hurry, thereby possibly omitting medical details that could be vital to the clinical picture.
When I was monitoring medical-student interviews, I’d point out that, although greeting patients in an unhurried way may seem like a waste of time, greeting them in a way that increases the risk of missing the crux of the patient’s problem is an even greater waste of time–for doctor and patient alike.
My appreciation of greetings’ significance has carried over into my nonprofessional life, too. My wife and I have lived in a senior independent-living facility for five years. Recently one evening we stepped into the ground-floor elevator along with a fellow resident and friend named Charlie. A former actor, he is a taciturn but friendly man who lives in an apartment on a floor above ours. As my wife and I exited the elevator on our floor, Charlie called out, “See you tomorrow!”
I was struck that he didn’t say “Good night” or “Goodbye” (a contraction of the sixteenth-century British “God be with you”). Here we are, living in a domicile for the aged, and someone says, “See you tomorrow.” What a statement of existential hope!
Charlie chooses his words carefully; I suppose he could have said “Toodle-oo” (which may derive from the French expression “à tout à l’heure,” meaning “See you later”). But I’m glad he said what he did–because, at this stage of life, one is always stretching for hope. Hope for a good year. Hope to see our grandchildren this weekend. Hope that our fragile health will continue to hold up. Hope that world peace will be maintained, and that the stock market won’t crash. If you’re a patient with terminal heart disease or cancer, you’ll hope for a pain-free day, or for less trouble breathing over the next hour.
When someone is ill, hope may be associated with denial–denying the illness or denying its severity.
None of us in this independent-living facility need to practice much denial; our advance towards death is not a rapid downhill rush but a gentle descent. Still, as we age, we become more aware of our own gradual disintegrations. These days, when I get up from a chair, it is no longer a spontaneous act; it’s a thoughtful, premeditated one. First is the planning of the act (including which chair arm to push off of); then the major effort of legs and arms as I begin to stand; then unfolding and straightening the back; and, finally, standing upright and moving on.
At our facility, perhaps because of people’s awareness of their own potential fragility, or perhaps out of typical Southern manners, the usual morning greeting is “You okay?” instead of “How are you doing?” This sets the stage for a succinct yes-or-no answer. Some people still respond with an “organ recital” marked by great detail but few traces of emotion. With these individuals, the task becomes to avoid any mention of health topics, or failing that, to cut short the encounter.

Sometimes, though, we encounter the opposite response, as with a tall, gracious and healthy-looking lady named Karen. On our first day there, she stopped us in the hallway to introduce herself.

After thirty seconds of small talk, she informed us, “I have stage-four cancer.” She followed up by saying, “I intend to live fully in each moment I have left.” It was a shocker–like witnessing a terminal patient being interviewed by Elisabeth-Kübler Ross, author of On Death and Dying. I felt immediate admiration for Karen’s energetic, positive attitude.

In the ensuing months, Karen flourished in our community, with no further comments on her health status until her physical symptoms started interfering with her day-to-day functioning. Along with a friend of hers, who like her was in a terminal state and under hospice care, Karen decided to stop drinking fluids and eating. The two joked privately that they were “in a race to the end.” Both died, a day apart, with dignity and with community support.

Karen’s honesty about her medical status, coupled with her grace and spirit, were an inspiration. I felt grateful that she shared with us who she was, not just her medical symptoms. In that way, she gave all of us the gift of time well spent together. And she’d made her intention implicit, right from the start, in how she greeted us.
So when I say “Hello” or “Goodbye” to our fellow “inmates,” I still pay particular attention to the details of my salutation, just as I’ve always done with my medical colleagues and patients.
Only rarely do I ask “How are you?” But when I do, I try to give the answer my full attention. In this way, as minor as it may seem, I try to show my neighbors that I value and care for them.
Because life is short, and everyone’s time is precious.
About the author:
Frederick Guggenheim is a professor of psychiatry and chair emeritus at the University of Arkansas for Medical Sciences, and an adjunct professor of psychiatry at the University of Nebraska College of Medicine. “I stopped my busy part-time work as a hospitalist and cut back to quarter-time work as a physician. When that didn’t pan out, my backup plan was to read through the six shelves of books on life in medieval France and England that I’d brought with me to this retirement facility. My back-up back-up plan was to write: mysteries, children’s stories, poems, short stories and narrative medicine pieces. I’ve tried my hand at all of these–but the most rewarding and relevant is the last item. In essence, where I live is my ‘lab,’ and I’m describing the results of the ‘experiment’: what I see here, and how I feel about it. In the past five years, I still haven’t delved into any of those books on medieval life.”
Print This
Share on facebook
Share on twitter
Share on linkedin
Share on email
PrevPreviousLovebirds
NextSounding the AlarmNext

12 thoughts on “Greetings and Salutations”