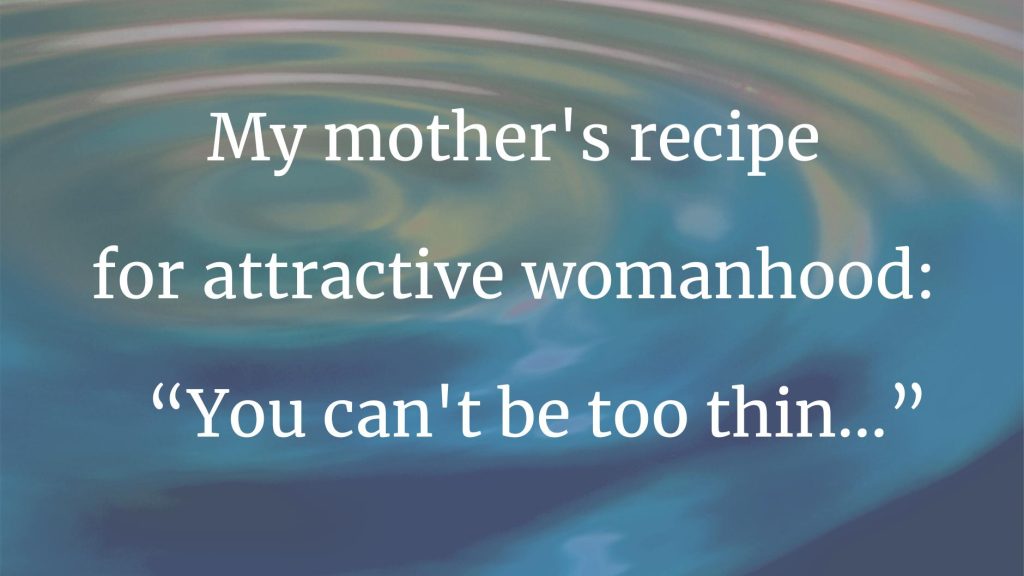 My name is Ronna, and I have an eating disorder.

Saying the words is easier than treating the disease. Change has never come easily to me. While my disorder is rooted in my past, it has flourished in the years since COVID infected the world.

At the start of the pandemic, I lost my part-time job as a writing instructor at the local university. My boss of almost seventeen years blamed my dismissal on COVID—but added that I no longer met the needs of the university’s writing center. Having spent my adult life as a teacher, I was left mourning my lost identity.

Loss piled upon loss: The pandemic prevented me from visiting my adult children, making my weekly library trips or indulging my lifelong passion—attending the theatre, as either patron or usher.

With life stripped to the minimum, I sought to control what I could. I walked my apartment building’s hallways for an hour daily, I broke my vow to read only “real” books and got a Kindle—and, lacking the energy to fix wholesome meals, subsisted on low-fat yogurt and crackers smeared with peanut butter. Only my addiction to dark chocolate M&Ms kept me at my current weight, ninety-five pounds—a dangerous number for someone five feet eight inches tall.

I wasn’t born fearing food; as a child, I viewed it as a delight. I never turned down a Dairy Queen cone with sprinkles. Our family dinners of meat, potatoes and vegetables ended with dessert and “subsert”—cake and pudding, for example. Before bedtime, my parents would treat me to a huge bowl of ice cream.

But as I entered junior high and started to develop breasts, my mother’s behavior changed. Instead of feeding me treats, she began sharing her recipe for attractive womanhood: “You can’t be too thin.”

The older I got, the more control Ma exerted over my relationship with food. She herself never indulged in the cookies she baked; at picnics, she never ate the bun of her hamburger. To please her, as I yearned to do, I understood that I’d have to adopt her mantra—directed solely at me, although my older brother was the chunky one.

I began to equate how I looked with how I ate. Tall and socially awkward, I feared that excess weight would worsen my isolation—so, from junior high on, I ate starvation rations: for breakfast, a small glass of orange juice; for lunch, a grapefruit half and a hard-boiled egg; for dinner, a plate of skinless chicken and a salad. Gone was the ice cream; even my stash of M&Ms lasted longer than before.

Because Ma praised high grades, I focused on homework rather than learning the dances on American Bandstand. I envied the girls who sipped cherry Cokes and gobbled French fries while reveling in the curvaceous bodies that won them boyfriends and prom dates.

In college, my roommate and her friends gossiped over chips or candy; refusing their invitations to join in, I became a pariah. Although no one admired my stick-thin figure, I comforted myself by thinking, Ma likes the way I look, even if she can’t say it out loud.

Books were my companions—a safe, non-caloric escape from loneliness. Only my Sunday walks with Dad offered real camaraderie. We’d always stop at the ice-cream store to enjoy his favorite soda, chocolate phosphate. My enjoyment was tempered by guilt over this secret pleasure, which Ma would have forbidden if she’d known.

In grad school, a miracle occurred: I found the courage to attend a Friday-night religious service on campus, where I met some friendly grad students—and my first-ever boyfriend. We’d all go out for lively discussions over pizza and soda. Thrilled at belonging, I indulged. My skirts grew tighter, and my scale (a gift from my mother) confirmed my fears: My weight had skyrocketed to nearly 150 pounds. Part of me worried about Ma’s reaction; another part relished my newfound freedom.

A spring trip home brought an end to this best of times. For the plane ride, I chose a slimming outfit: a blue skirt and matching vest; a red, white and blue blouse; blue fishnet stockings. The disdain in Ma’s eyes as she watched me step off the plane told me that my efforts had failed.

Returning to school after the visit, I opened my mailbox to find a letter in which she lambasted me for losing control over my body and looking like a stuffed pig. The ink on the page blurred as my tears spilled over. I tore the letter into tiny bits, but couldn’t erase its contents from my brain or heart. Ma had scorchingly conveyed that I didn’t deserve joy or gratification. Knowing that another such letter would destroy me, I accepted her verdict.

In retrospect, I wish I could have talked to her about her crushing words—how they’d made me feel less comfortable with myself and with my friends—but we’d never developed a healthy way to communicate. If I wanted Ma to remain a part of my life—and I did, despite everything—I knew that I had to live by her rules. So I stoically watched a half-gallon of ice cream melt down the sink drain and filled my refrigerator with grapefruit and carrot sticks.

Four years later, I walked down the aisle at 140 pounds—and thirteen years later exited divorce court at 120 pounds, worn thin by the stress of ending my marriage. Leaving the boyfriend-turned-husband who’d lost my love and respect bothered me less than disappointing my family and facing life as a single mother of two.

My eating pattern was feast or famine, depending on my mood: on good days, dining on half of a precooked chicken with mashed potatoes and buttered hot rolls; on bad days, when I felt disappointed by my students’ responses or my children’s behavior, eating only cereal or carrot sticks. When I felt really down, I’d eat ice cream directly from the carton.

My teenage son ignored my behavior, immersed as he was in trying to become a starter on the varsity basketball team; but my daughter scrutinized my bizarre eating habits, viewing them as further proof that “My mother is weird.” To my immense regret, instead of sharing my struggles with them, I let shame keep me silent.

With Ma’s death in 2007, the situation changed. I became my beloved father’s roommate and caretaker—and, despite the challenges, my days began and ended with a smile. With Dad, I felt needed and valued, and my eating improved accordingly. I had breakfast every day—a first for me. When I took him window shopping at the mall, which he loved, we’d have lunch together; I cooked dinner every evening.

Dad’s death seven years later, at age ninety-eight, devastated me. Initially I filled the emotional void with food—huge meals, bowls of ice cream, M&Ms, cookies and coffee cake. But as I sank deeper into depression, and the pandemic quarantine descended, I resumed my laser focus on restrictive eating. Once more, I became my mother’s daughter—still yearning for her approval, although she’s long dead, and striving to win it by not eating.

And that is where I find myself today.

Now I begin and end each day by weighing myself. The morning numbers, sometimes as low as ninety-three pounds, inspire pride. The evening’s inevitable two-pound increase leads to self-excoriation—You have no willpower!—for eating one too many M&Ms or snacking on animal crackers. I fall asleep in self-loathing and awaken resolving to eat less, sometimes wishing I could disappear entirely.

I also spend a lot of time studying my naked body in the mirror. Sometimes I see jutting bones and a sunken stomach; at other times, excess flesh and a baby-fat belly. My rational mind tells me that I’m thin. But my loneliness and my fear that, at seventy-five, I may not have many years left, make self-improvement efforts seem futile.

My children worry, my primary-care physician worries, my close friends worry—but I laughingly dismiss their concerns. I realize that I’m depressed and need professional help. But so far I’ve refused to follow up with the counselors and nutritionists my doctor recommends.

I don’t know what the future holds. I only hope that I can reenter a happier period—returning to ushering, taking adult-oriented classes, forcing myself to engage in social activities—that will lead to a healthier diet. I hope to find the right therapist to support me in my journey, someone who can help me discover a core of inner strength that allows me to eat again, one day at a time.

My name is Ronna, and I have an eating disorder.

Ronna L. Edelstein is a mother and teacher, reader and writer, theatre patron and usher. Her nonfiction and fiction works have appeared in Scribes Valley Publishing, Pulse, The Washington Post and elsewhere. “I attribute my love for writing to my paternal grandmother and parents, who introduced me to books and the beauty of language; to my children, both of whom encourage me to write; to my students–my extended family members who welcome the opportunity to become independent writers under my guidance; and to the University of Pittsburgh BA and Northwestern University MAT programs, which taught me the intricacies of the writing process.”