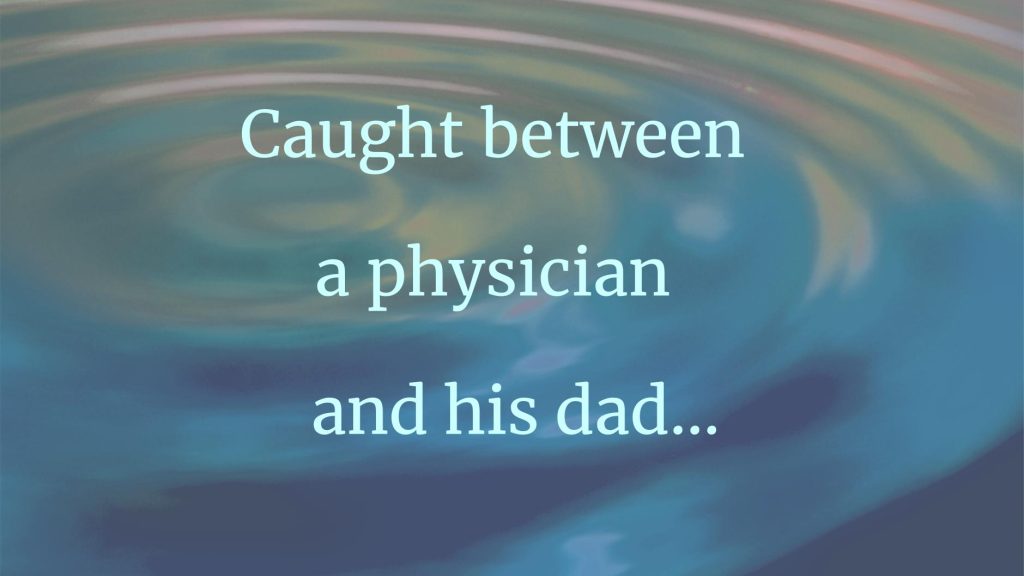 When I met Mr. Rosenbaum, age ninety, I’d been a physical therapist at the hospital for all of three months.

The nurse had propped up his scabbed foot on several pillows. Cushioned on them like a precious jewel, it extended over the bed’s end.

I introduced myself and asked if he’d like help adjusting his yarmulke, which was entangled in the nasal breathing tube slung around his left ear. He smiled at me, one eye wider than the other. I grinned back, reminded of my own grandpa.

“Are you married?” he asked.

“I’m afraid not,” I said, fixing his yarmulke.

I knew from his physician’s evaluation that Mr. Rosenbaum had dementia, and that his aide had brought him to the emergency room when a painful leg infection prevented him from walking. My goal was to help him out of bed and into a nearby recliner chair to prevent further deconditioning. Given his pleasant demeanor, I didn’t anticipate any difficulty.

His doughy smile held as he failed to answer my questions about the year and date, where we were and which assistive devices he owned. When I asked if he’d like to try some exercises, he answered, “Of course!” as if insulted that I’d taken so long to ask.

Guiding Mr. Rosenbaum through ankle pumps, I noted the fading pen marks on his inflamed calf—a doctor’s map of his skin infection. His nasal tube hissed.

A draft chilled my back, and I glanced over my shoulder. The thin man standing in the doorway wore a white button-down shirt and a purple name tag like my own. I assumed he was the hospitalist. Then he came over and leaned down to kiss my patient’s forehead. Only then did I notice that he had Mr. Rosenbaum’s wispy eyebrows, but black, not gray. His name tag read: “F. Rosenbaum, MD, Department of Pulmonology.”

Immediately, I felt my palms begin to sweat inside my latex gloves.

“Are you going to get him moving again?” he asked.

“That’s the plan,” I answered with counterfeit confidence.

Dr. Rosenbaum gestured towards his father: He’s all yours.

The latter continued to smile as I grasped his hand and said, “I’d like to help you to sit up now, okay?”

As I supported his trunk, he swiveled his legs towards me. The toes of his healthy foot nearly grazed the floor—then he jerked both legs out straight.

“No-no-no-no-no!” he howled, flinging himself backwards. I lurched forward to support him and swung his feet back onto the mattress to keep him from sliding off. To make matters worse, he’d had a bowel movement.

I steadied my breathing, trying to mask my alarm. Meanwhile, Mr. Rosenbaum had resumed his expression of pleasant confusion. Dr. Rosenbaum’s jaw muscles tensed as he stared at me, arms folded.

I excused myself and went to find the nurse for help. After we’d cleaned up Mr. Rosenbaum, I proposed that we use the mechanical patient lift to transfer him into the chair.

“He can walk,” said Dr. Rosenbaum. “He needs rehab, not a machine to do it for him.”

As a new graduate, my idealistic determination to heal the world was hindered by my paradoxically tenuous self-confidence. Feeling the doctor’s disapproval cascade over me, I elected not to explain the therapeutic benefits of simply sitting in a chair, no matter how the patient gets there. At the same time, I knew that I definitely couldn’t risk another attempt to transfer Mr. Rosenbaum by myself.

The following morning, I learned that Dr. Rosenbaum had phoned my supervisor to express his dissatisfaction with me. My face burning, I explained what had happened, and she nodded understandingly.

When I saw Mr. Rosenbaum’s nurse that afternoon, I learned that Dr. Rosenbaum had dismissed her. He’d also found fault with the residents’ treatment of his father and now would talk only with his father’s attending physician.

Feeling like a scolded child, I slunk to Mr. Rosenbaum’ bedside. He was asleep, an oxygen mask strapped over his face. His cheeks glistened, and I could see his elevated heart rate on the monitor. His aide, Mrs. Pierre, was rubbing lotion onto his hands.

Dr. Rosenbaum sat in the guest chair, typing on a laptop. When he saw me, he closed the computer and shook his father’s shoulder.

“Tatty, it’s the therapist. He’s going to get you walking again.”

This time, there was no smiling as I led Mr. Rosenbaum through his exercises. His eyelids kept drifting shut.

“I’ll support his back when you help him to sit up,” Mrs. Pierre offered.

When Mr. Rosenbaum’s feet hit the floor, he seemed a bit shocked. Licking his chapped lips, he gazed around the room as if seeing it for the first time.

Dr. Rosenbaum pushed a walker over to us.

I tucked one hand beneath Mr. Rosenbaum’s right buttock. Mrs. Pierre mimicked me on the other, and on my count, Mr. Rosenbaum rocked forward—then wailed, “NO-NO-NO-NO-NO!” before he’d lifted an inch.

He strained back against us; as before, I had to lower him onto the bed. The monitor blared as his heart rate reached 160 beats per minute. I suspected that mine was about that, too.

I took one deep breath, then explained, “Fear of falling is as big a barrier to mobility as deconditioning and foot pain. But even if your father needs a mechanical lift, getting out of bed would benefit his lungs, his body and his mental status.”

“If you’re not going to do your job, then we’re finished,” Dr. Rosenbaum said sternly.

My faced burned, even though I knew that trying to stand Mr. Rosenbaum again would be unsafe for both of us. Beads of sweat dripped from my gloves as I peeled them off.

Both Dr. Rosenbaum and I froze. I expected him to dismiss her as he had the nurse, but he said nothing.

I wheeled the lift from the equipment room, fear and embarrassment pulsing through me.

Mrs. Pierre helped me to place the canvas sling beneath Mr. Rosenbaum as his son sat in the guest chair, fingers scurrying across his laptop keyboard.

I fastened the sling to the lift, then pressed the up arrow. Mr. Rosenbaum’s body rose effortlessly from the mattress, dangled for a moment, then lowered into the recliner. Mrs. Pierre applauded.

“You look great, sir,” I said—then flinched as Dr. Rosenbaum slammed his computer shut and stormed from the room. Mrs. Pierre looked at me and shrugged.

I walked slowly back towards the rehab office, planning what to say to my supervisor if Dr. Rosenbaum called to complain. Then I stopped in my tracks.

Crouched against the wall beside a vitals machine was the pulmonologist, hands covering his face. From behind them came muffled sobs.

Hoping he hadn’t seen me, I started to retrace my steps.

I stopped, feeling a thrill of panic.

Then Dr. Rosenbaum reached out his hand to mine and shook it.

“Thank you for helping my father,” he said.

Galen Schram is a hospital-based physical therapist at NYU Langone Health in New York City, and a graduate of Columbia University’s narrative medicine program. He is the 2020 winner of the Bellevue Literary Review Goldenberg Prize for Fiction. “For me, writing has been a mindfulness exercise that enhances my clinical practice.”

4 thoughts on “Father and Son”