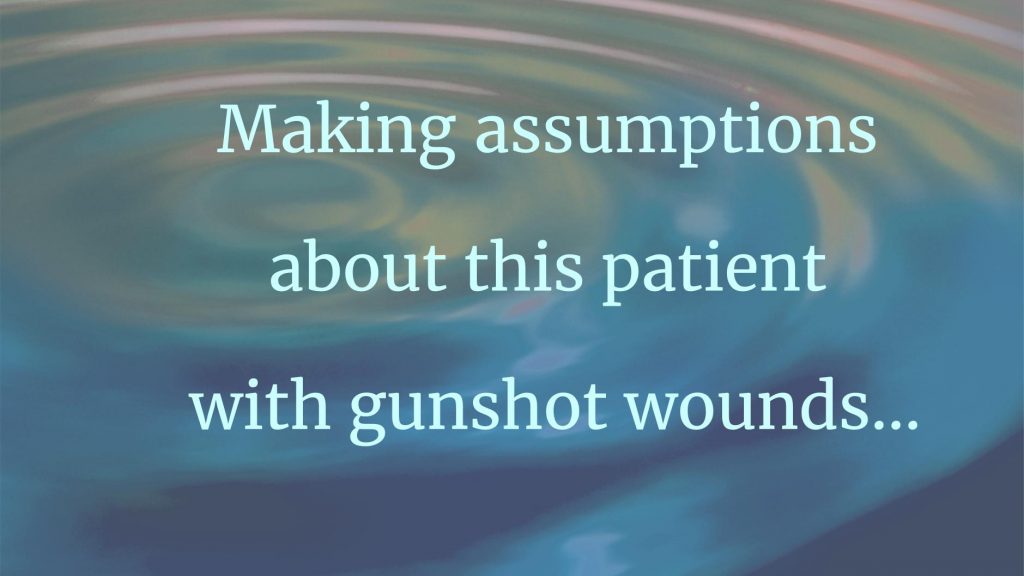 If harsh words fall, but no patient is around to hear them, do they make a sound?
This particular night on my trauma-surgery rotation as a fourth-year medical student, the question weighs heavily as a page alerts the team that a patient with multiple gunshot wounds will arrive in ten minutes.
Everyone’s kind of excited. Anxious, too. Jittery.
1:00 am. Down in the ED, the main actors stand masked, gowned and ready to go. ED Cowboy stands at the head of the bed, Surgery Senior stands to the side. Alongside them, the throngs of people without obvious purpose who always seem to show up just in time for the evening’s episode of “drama in the trauma bay.” Everyone’s done this a thousand times before. Well, maybe not everyone.
“TRAUMA’S HERE.”
While the EMT’s giving the report, we unstrap Guy (in the computer, his name is “Disaster,” because we don’t know his name). He’s yelling so loudly that we can’t hear the EMT, but I guess he has good reason.
The stars of the show launch into the ABCs of trauma care.
A: Airway.
“What’s your name, sir?” ED Cowboy yells. Guy says something incoherent about being in pain.
“Airway’s intact.”
B: Breathing.
Surgery Senior wastes no time: “Got bilateral breath sounds.”

Guy’s blood pressure starts dropping. And he’s quieter. Now quieter doesn’t seem so good. He’s not protecting his airway very well. And his blood pressure’s dropping. And his feet are cold. And it doesn’t take the impressive prowess of a fourth-year med student to see that he’s bleeding into his increasingly distended belly. And bullet holes, at least new ones, look so much less…painful and deadly than you’d think.