Entry from an Intern’s Journal

Editor’s note: Over the next months we’ll be carrying occasional pieces by Jennifer Reckrey, a family medicine resident in New York City. Each week while she was an intern, Dr. Reckrey recorded some of her experiences as a brand-new resident. Today’s story is from week number six.

How do you convince someone to do something they don’t really care about?

This week I took care of a 58-year-old woman who came to the hospital with one week of fevers, diarrhea, burning with urination, and abdominal pain. Though she probably had an infection, the CT scan she got in the ER didn’t reveal its source. It did, however, show that something was wrong with her uterus and ovaries. If the odd-looking mass was an abscess, it needed to be drained. If it was a cancer, she needed a very different sort of treatment plan. And to find out what was going on, she needed an MRI.

When I first asked her about it, she quickly agreed. She’d had MRIs scheduled in the past (her outpatient gynecologist was concerned about her too), but had always missed her appointments. She seemed glad for the chance to get this cumbersome test over with while she was stuck in the hospital anyway. But when they called her down for the scan, she refused to go.

I went to her room, where she was resting comfortably on her bed and watching TV. I explained what the test would be like and why it was so important that she get it done as soon as possible. I tried to be gentle yet firm. And she wouldn’t budge. When I asked her why she wouldn’t go, she said that she didn’t want to miss her soap opera. Without knowing how I got there, I found myself playing the bad cop.

“Do you really think watching your telenovela is more important than trying to find where your infection is coming from and making sure that you don’t have cancer?” I asked.

About an hour later, my supervising physician went to talk with her, and she told him that she was afraid of feeling claustrophobic in the MRI machine. Thinking the problem solved, I gave her some encouragement and a sedative to help her relax and sent her for the test. An aide wheeled her down to the radiology suite, but just ten minutes later wheeled her right back up to the floor again. From down the hall, I could hear her complaining that the line for the MRI machine was too long and that she didn’t want to wait for yet another test. I left the hospital that day wondering what I could have done differently, better.

When I came in the next morning, she’d had the MRI overnight. No fanfare. No sedation. No big deal. (And no big help either. The MRI confirmed neither abscess nor cancer, and gave no further clue as to what might be causing her pain and fevers.)

There have been many other patients like her this week: the diabetic with the huge, gaping sore on his foot who refused antibiotics and insulin; the young sickle-cell patient who wouldn’t go home until her pain cleared completely; the family who insisted that their demented, dying mother have a feeding tube inserted; the chronic schizophrenic, now stable, who refused to take his antipsychotics.

I must respect each individual’s right to make decisions about his or her care, but I must also make sure that these patients understand the consequences of the decisions made. My training gives me a perspective on the big picture that patients often don’t have. For me to pretend that all options are equally good would be just as dishonest as pretending that, since I’m the doctor, I should have the final say.

Balancing these competing demands–the patient’s right to freedom, the doctor’s duty to provide guidance–is not easy.

Jennifer Reckrey MD is a second-year family medicine resident who graduated from SUNY Stony Brook School of Medicine. “I started writing these reflections to keep in touch with friends and family, but the process of putting my experiences into words has also helped me to better understand my own practice of medicine.” 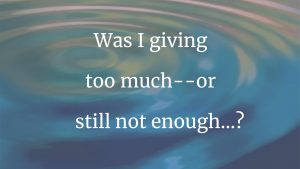 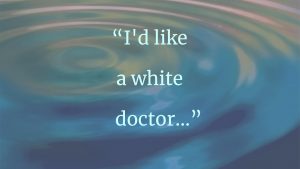