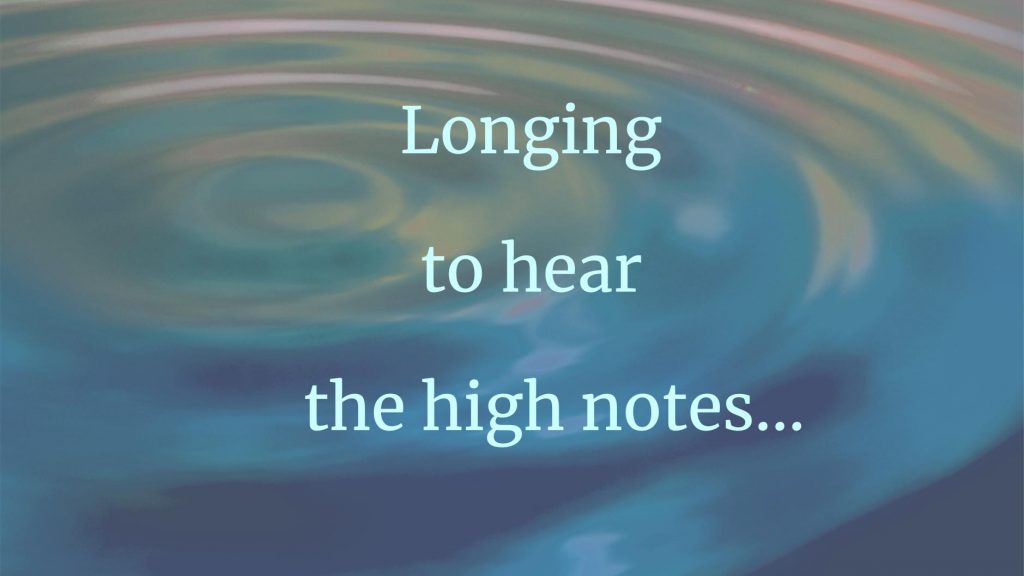 “I’m really sorry,” the audiologist said. From her expression, I could see that she meant it.

It was the winter of 2012, when Barack Obama and Mitt Romney were about to become their parties’ nominees for president, and the case that would legalize same-sex marriage was on its way to the Supreme Court.

As the audiologist regretfully explained, no device yet existed that could correct the hearing deficit I was experiencing as a result of chemotherapy.

To say that I was disappointed would be a huge understatement. And yet I didn’t regret having decided to undergo chemotherapy.

That decision had not been an easy one. Surgery had removed all visible traces of my gallbladder cancer, creating the possibility that I might be cancer-free. If that were the case, then chemotherapy would expose me to the risk of serious side effects without offering any conceivable benefit. Nevertheless, although my tests and scans showed no signs of disease, it was extremely likely that microscopic cancer cells were still circulating in my blood.

After wrestling with the pros and cons for several days, I went ahead with the recommended treatment. I made that decision not because I was sure that the chemotherapy would work, or even that I needed it, but because of the unbearable regret I would have felt if I’d declined it and the cancer had then recurred.

Among the many possible side effects my medical oncologist had mentioned was hearing loss. She listed it in the second tier: not as common as neuropathy or nausea, but more common than heart attacks or secondary cancers.

When hearing loss did indeed occur, it was abrupt and transformative. I first noticed it when playing a favorite piece of music on my cell phone: Rimsky-Korsakov’s Scheherazade. The opening includes a very high, soft violin solo–which, I suddenly realized, I wasn’t hearing. When I tried playing it on different devices and got the same result, I had to face the reality that those high notes were lost to me. As the audiologist later confirmed, my hearing deficit was in the high range.

I soon realized that I was also having trouble understanding people when they were talking, especially if they weren’t facing me, or if there was background noise. At age sixty-five, with previously normal hearing, I had to learn not to be self-conscious about asking people to repeat what they’d said, even when everyone else had obviously understood it.

The hearing loss became evident during the last month of a four-month course of chemotherapy, and coming on top of other limitations–such as having to leave events early because of fatigue–it raised the concern that people might see me as sidelined, fragile, no longer a full participant in normal life.

But then the chemotherapy ended, and as my strength returned and I felt more like myself, it became quite natural to say, “Would you be kind enough to repeat that? I don’t hear well.” After all, I reasoned, the hearing deficit isn’t a character flaw. It’s a battle scar.

More than nine years later, there’s been no sign of returning cancer. My doctors scrupulously avoid using the word “cured,” because it could come back; but the probability is low enough that they’ve stopped doing CT scans.

If the chemotherapy contributed to that result, then the hearing loss was well worth it. Otherwise, it’s unnecessary damage. I’ll never know for sure. It’s an uncertainty with which I have made my peace.

Meanwhile, in the years since I finished cancer treatment, my friends have grown older, retired, had hip and knee replacements and begun using hearing aids. At a 2019-’20 New Year’s Eve party, a couple of them raved about the new technology that has revolutionized hearing aids.

Hmmm, I thought. Maybe I should have my hearing tested again.

After years of feeling resigned to what I believed to be an irrecoverable loss, the possibility that I might once again hear the high notes of violin and flute was thrilling–and unsettling. Picking up the phone to schedule an audiology examination, I felt both hopeful and braced for disappointment.

“Oh, sure,” my new audiologist said, as if it were the simplest thing in the world. “We can fix this.” Just a few months earlier, she told me, a major hearing-aid company had introduced a new technology that would suit me perfectly.

When my hearing aids arrived, it was a little tricky putting them in. “You have really small ear canals,” the audiologist grumbled, fishing around for a different kind of tip to put on the end of each hearing aid. Then she turned me loose into a world that sounded very different than it had before.

Stopping at a cafe for lunch, I eavesdropped shamelessly on the people sitting at the bar, a few yards from my table. Even with their backs to me, I could easily hear what the men were saying. The women’s higher voices still escaped me, so I pulled out my cell phone to fiddle with the app that comes with the hearing aids.

All at once, with perfect clarity, I heard a woman say, “My mother was born in Ireland.” It was my personal version of “Mr. Watson, come here–I want to see you.”

Later, in a little shop on a pleasant, tree-lined street, I listened to the background music, which kept being interrupted by high-pitched interjections that didn’t seem to fit. It took me a while to recognize what they were, because it was a sound I hadn’t heard for years.

Then I went out into the sunny spring afternoon and listened to the birds sing.

Joan DelFattore is the author of three books about free speech (Yale University Press). She now writes about the choice to live single in a couples-oriented culture; her articles have appeared in the New England Journal of Medicine, The Washington Post, Psychology Today and elsewhere (links at www.joandelfattore.com). “As in this story about hearing loss, my writing about single life reflects a lifelong conviction that there is no shame in differing from the majority.”