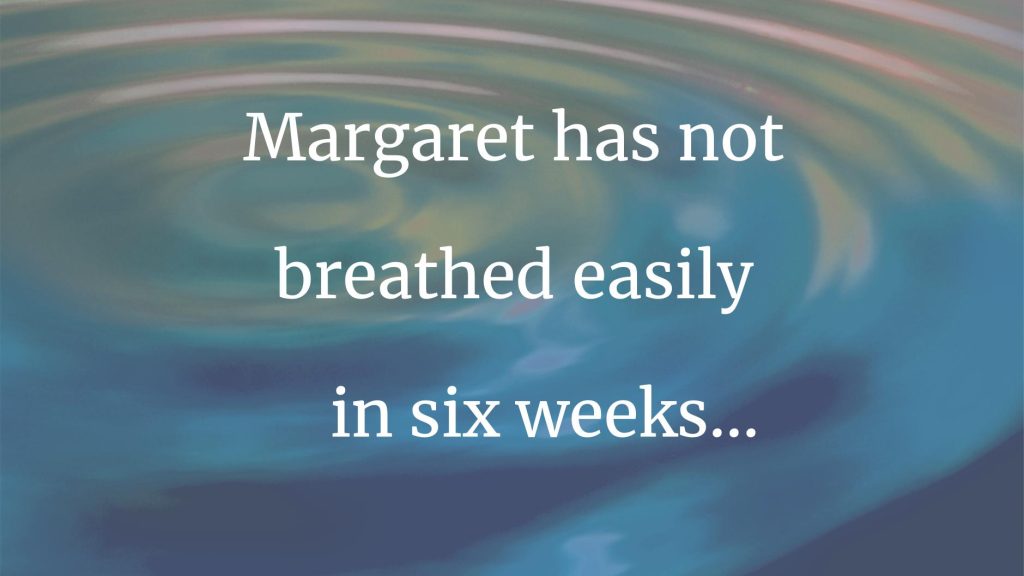 I knock on the partly open door and peek around the curtain. A grainy yellow light above the hospital bed falls on a frail, trembling woman as she struggles to comb her wet grey hair.

She does not hear me over the hiss of the supplemental oxygen. I watch her for a moment longer.

She is doggedly untangling her fine hair, hands shaking, pausing every few seconds to catch her breath. Her shoulder and neck muscles lift and heave, straining to draw air down into her damaged lungs. Her acute COVID-19 infection has left her barely able to breathe, even with the help of two supplemental oxygen sources—a two-pronged tube stuffed into her nostrils, and a mask strapped over her nose and mouth. She is a scuba diver alone in dark waters, dependent on a thin stream of air.

She looks me in the eye, puts down her comb and murmurs, “How are you doing today?” She can only manage a few words with each breath.

I am one of several acute-care physical therapists who rotates through the ICU; it’s been a few days since I’ve seen her. But amid the eddying sea of masked hospital staff, she remembers me. I am amazed by the capacity of certain individuals to look beyond their own immediate suffering.

Margaret has not breathed easily, not for one moment, in six weeks. Her sleep is fitful, interrupted. Eating is a chore; trying to chew and swallow between gasping breaths robs a meal of any pleasure. A few days ago, I physically helped her to rise from bed and shuffle a few steps, an act that left her panting and exhausted. She has not felt sunshine or fresh air on her face since admission. And still she fights to breathe, to heal, holding tightly to the slippery line that tethers her to life.

I stand at the side of her bed, a sick feeling in the pit of my stomach. One of the hospitalists has informed me that this seventy-year-old woman is unlikely to recover–she will likely die within the next week. The damage to her lungs is too severe; she has exhausted the benefits of steroids and remdesivir; she is unlikely to qualify for a lung transplant given her age and the long queue of otherwise healthy forty- and fifty-year-old patients, all living the same tenuous, gasping existence.

I hold this ugly truth behind my teeth as I assess her vital signs and take her through a variety of light tasks: easy exercises, facilitated range of motion, breathing retraining. I use firm and soft touch, encouragement and a low, calming voice of the kind used for bedtime stories or a spooked horse.

If these are Margaret’s final days, I believe that she has the right to know. She should decide how, where and with whom she wants to spend them. She deserves the time and space to say goodbye to her people. She knows that she is gravely ill, but she would be shocked to hear how poor her prognosis is. She was active, healthy, prudent and careful. Her husband, unfit and diabetic, managed to recover from his infection at home, and yet here she lies, incapacitated. She has likely not spent much time imagining how she might die. If she has, I doubt she envisioned herself like this—immobile, starved for oxygen, barely able to piece her thoughts together.

“Can you help me get up to the chair?” she gasps. “My tailbone is so sore from lying in this bed.”

I pause a beat too long, considering the risks and benefits of mobilizing her, given her tenuous condition.

“Margaret,” I say finally, “I’m going to step out to double-check my plan with your doctor and the respiratory therapists.”

I speak with the hospitalist, the pulmonologist, the bedside nurse and the respiratory therapist.

I learn that yesterday Margaret signed a “DO NOT INTUBATE” form.

She now understands that placing her on a ventilator will be fruitless. At rest, her levels of supplemental oxygen are already so high that we can only titrate them so much higher. If exertion sends her oxygen levels so low that she can’t recover, our resuscitation options are limited.

But if her diagnosis is effectively terminal, shouldn’t she have the autonomy to control her body, to move, to try to be more comfortable, to have some dignity?

The team decides that the answer is yes; we must allow her to try to move, if that is her goal.

I return to Margaret’s room, accompanied by the respiratory therapist.

“Ready?” I ask. I help her sit up, looping one arm behind her neck and shoulders to lift her torso, simultaneously pulling the blue chuck underneath her hips, squaring her frame to the edge of the bed. I keep a firm grip on her shoulders.

She has the endurance to sit upright for only ten seconds, mouth hanging open and eyes squeezed shut, trembling with effort. Then she shakes her head and crumples sideways as my hands guide her back down. She stretches across the bed at an angle, gasping, trying to slow her breaths.

The respiratory therapist turns the OxyMask flow to flush, and the hissing of forced air fills the room. My eyes dart between Margaret’s grey face and the dismal 75 percent oxygen-saturation reading on the monitor. I lift her slack limbs and adjust her position to make it easier for her to breathe.

Another thirty seconds crawl by, with no change on the pulse-oximeter reading.

“Margaret,” I murmur, “let your breathing slow down. Inhale just a bit deeper. There you go. You’ve got it now.”

At last, slowly, the numbers begin to tick upward. My jaw unclenches behind my mask.

She is so brave; to fight to move, to fight for her independence and some semblance of upright normalcy. She is willing to try, even in the face of crushing shortness of breath. It takes so much effort, and she must manage her fear. She is deep in shadowy waters, slowly kicking, singularly focused. The surface is so far away, and the tank nearly empty. Still she kicks upwards, taking tiny sips of precious air, fighting panic, alone in the deep, the tether slipping through her fingers.

Postscript: This was the last time that Margaret attempted to get out of bed. Two days later, her respiratory status worsened, and she died in the hospital.

Allyson Sutkowi-Hemstreet is a faculty-development resident at Duke University’s Doctor of Physical Therapy program. She tries to provide her patients and students with the same things she needs to function optimally: empathy, encouragement, movement, high expectations and humor. “Writing is how I reflect on and make sense of my life experiences at and outside of work. Writing is the best way I know how to connect my head and my heart.”