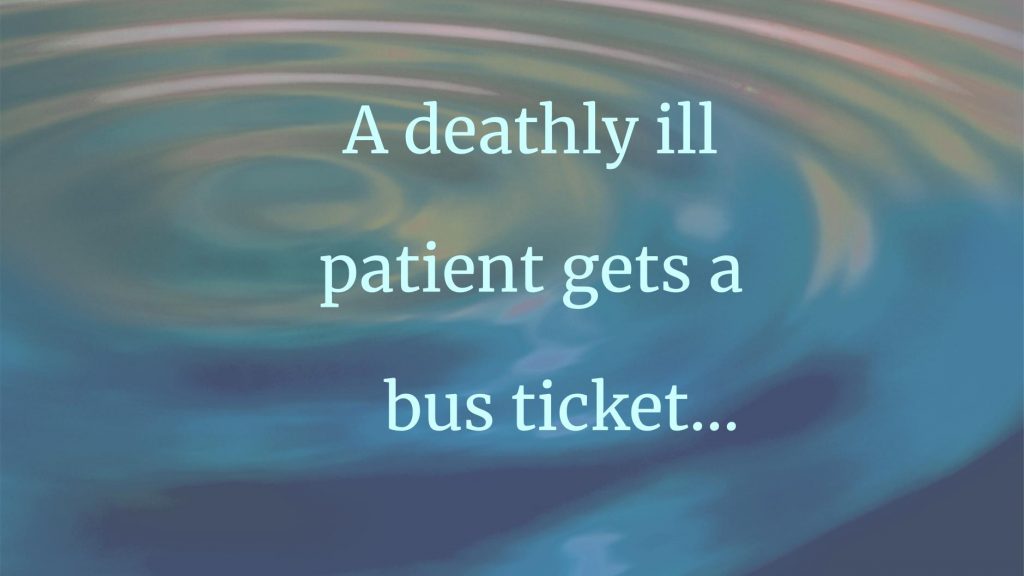 In the time of COVID-19, healthcare workers are stepping up to care for massive numbers of patients. Often, they’re doing this without adequate resources. At the beginning of the pandemic, our hospital administration referred to this as “crisis standard of care”–which the US Institute of Medicine defines as “a substantial change in…the level of care it is possible to deliver, made necessary by a pervasive or catastrophic disaster.”

For many American doctors this model of care is new, but I would argue that for most health workers worldwide, it isn’t new at all.

I think back to last year, when I spent a month in Tijuana working for Refugee Health Alliance (RHA), an NGO that gives medical care to families seeking asylum in the US. More than 10,000 individuals are awaiting asylum in Tijuana, and almost all are denied. They wait as nomads–unable to enter the US, unable to access care in Mexico.

Jose was one such patient. Originally from El Savador, he’d become estranged from his ex-wife and daughter, left his home country and made his way to the US-Mexico border, hoping to cross. He has been waiting in Tijuana for years.

Jose came to our clinic daily for his diabetic foot ulcer, which had worsened so much, despite oral antibiotics, that his foot needed to be amputated. Every day, he got sicker. For an amputation, he would have to go to the public hospital–but he didn’t want to. He had been there before; they’d turned him away because he had no insurance. Another time the police found him sleeping outside the hospital while he was waiting to be seen. They arrested him and took his belongings, including his ID. (This happens frequently.)

One day, Jose came in confused, his heart racing. He was septic. Bacteria from his infected foot were now coursing through his entire body. It was now or never: Either he would go to the public hospital for an amputation, or he would surely die. I called three other doctors, and we joined forces to try to persuade him.

“Jose,” I said, “I want to offer you the opportunity to go to the hospital one more time. I am worried that you are going to die.”

He shook his head. “No, doctora, I won’t go there. I don’t want to be abused in my final hours. Lo que dios quiere–as God desires it. If I die, I’d rather die with dignity than in that hospital.”

Seeing that it was futile, I took a deep breath and changed my approach: “Okay, Jose, I hear you. If there is one thing you want out of the next days, if they are to be your last days, what would it be?”

“I think I would want to go home to El Salvador. I want to see my daughter again.”

In order to get to El Salvador, he would have to take a bus to Mexico City, catch another bus through Guatemala and then a third bus to El Salvador. Without ID, he might not be allowed to cross the border. The journey would take at least a week, and he didn’t have that kind of time. This entire plan was impossible. But this was crisis medicine.

“Okay, Jose,” I said. “We’re going to buy you that bus ticket ourselves. Let’s get you home.”

Am I really supporting this decision? I asked myself disbelievingly. To put him on a bus, septic, and wish him good luck? To me, accustomed to having medical resources, it felt like malpractice. But in Tijuana, it was just reality.

One doctor went to the ATM to pull out cash for the bus. A second got Jose food for the trip.

“Nothing with sugar!” he said. “It’s no good for my diabetes.”

At that point, we were beyond trying to control his blood sugar, and yet he was still trying to eat well, trying to please his doctors to the very end. The irony made me want to weep.

I gave Jose my number to call if he made it to El Salvador. I knew this would never happen: He would die somewhere en route.

Jose left. For weeks after, I dreamed about him lying dead in a roadside ditch, mugged by a gang of teenagers. I was haunted.

A month after returning to the States, I was back on our inpatient service. The transition was tough. Going from the world of crisis care to a world in which anyone who has insurance, and who complains of a vague pain anywhere from jaw to hip, gets a two-day admission, hooked up to telemetry–morally, I could not reconcile these two worlds.

Why do my patients here get everything, when Jose gets nothing? I thought. Am I being a “better” doctor in one setting than in the other, or am I just ordering labs and doing more “stuff” here?

On my day off, my cell phone rang.

There must be a mistake, I thought. It’s been weeks–there’s no way he could have survived.

“Doctora?” he repeated. I forced my mouth to make words.

“Jose? How…how is your foot?” I stammered, thinking, This is just so impossible.

His story came out in a ramble: “Doctora, I got to Guatemala! I got really sick there–but I was so close to home!–I wanted to make it–so some men from the bus–I let them take me to the hospital. The doctors cut off my foot. That’s why it took me so long to call–I have been in the hospital in Guatemala. I got back to El Salvador this morning, and she picked me up–my daughter–I am here at the train station–I am calling you on her cell phone.”

The tears that I had not been able to cry for weeks finally came. I cried for Jose, and for every assaulted woman, every child with nightmares, every transgender patient fleeing persecution, every teenager without a parent, every patient who has been ignored and devalued by their government. Every patient around the world for whom medical care is always “crisis standard of care,” even in non-COVID times.

“Jose, este es un milagro.” This is a miracle. I said it over and over.

In retrospect, although my colleagues and I didn’t give Jose the “standard of care” as defined by my training, when I look at the extra time we took with him to understand his predicament and help him reunite with his daughter, I feel that we did more to improve his health and quality of life than I can sometimes do for my patients here in the States, despite our resources.

American-trained doctors often berate themselves for not “doing everything” for every patient. My experience with Jose reminded me that, sometimes, less is more.

Elena Hill is a family physician who trained at Boston Medical Center and is currently transitioning to practice in the Bronx. Her clinical interests include working with Latino and Hispanic American populations and immigrant communities. “I enjoy narrative medicine as a vessel for sharing the powerful stories of my patients.” For more information about Refugee Health Alliance, please visit refugeehealthalliance.org.

3 thoughts on ““Crisis Care” at the Border”