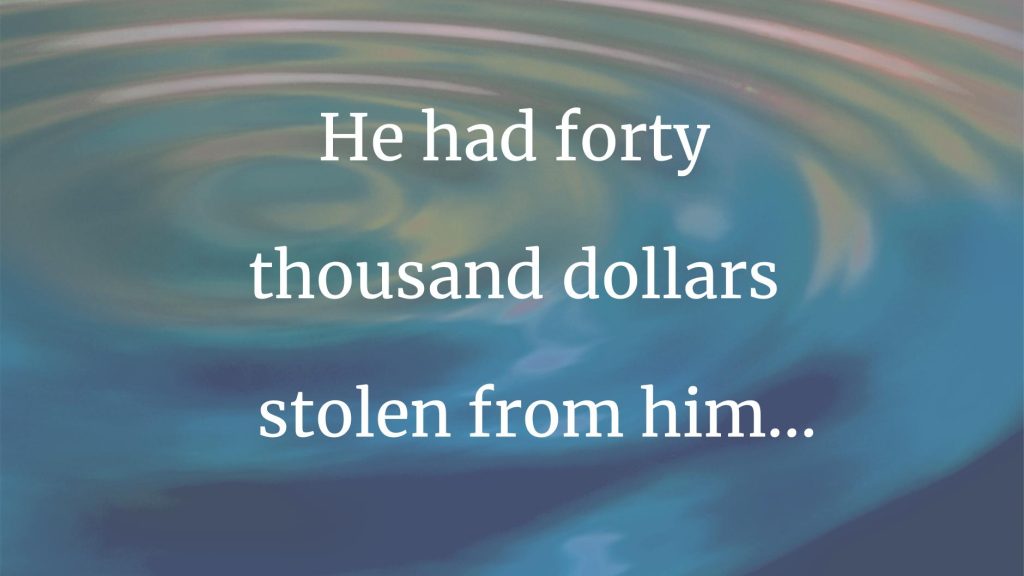 The last two years of my father’s life were interesting. Our previous roles were reversed: Dad was now the child, and I the adult. I moved him to a new city and state, getting him close enough to keep an eye on him. He was already suffering from dementia, a realization I came to after he had forty thousand dollars stolen from him.

That’s right. Forty thousand dollars. The Canadian lottery scam. It began with a telephone call telling Dad he’d won, but that he had to wire money to cover the cost of insuring delivery of his winnings. They were kind enough to stay on the phone with him while he drove to Western Union. A day later, he was asked to wire more money to pay the taxes in advance. This went on for several days—official-sounding people becoming friends with a lonely old man and asking him to send more.

The day the promised million-dollar check failed to arrive at his home, Dad called and said, “Karen, I think I made a little mistake.”

I helped him to move into a senior adult independent-living apartment a couple of miles from my house. I managed his finances and medical issues, while he simply relaxed and enjoyed the fellowship and activities. He was content and happy. That is, until he had the big stroke, the one that took so much of his mind. I then had to move him to a locked memory-care facility, because he loved to walk and, if given the freedom, would have ended up miles away with no idea how to return.

Hard thing to do to your dad.

Bacon House Assisted Living was only a mile from my home, so I visited often and took my dad to church and on other outings.

His confusion was obvious, though. Many days when I walked into his room, he’d say, “Gennie!” My mom’s name. She had been dead for six years. I’d always been told I looked like my mother, but to be confused for her by my father was disconcerting.

Dad settled in pretty well at Bacon House, though the workers often found him at the security door punching numbers in hopes of getting out. He participated in every activity and even created some of his own. Often, late at night, I would get a call from his cell phone. Answering, and hearing nothing, I would jump into my car and speed to Bacon House, only to find him sitting in his recliner, staring at his phone and pushing numbers. He’d say he wasn’t calling me, just “checking things out.” He thoroughly enjoyed this activity, judging by the number of calls I received.

He began to spend a great deal of time with one of the other residents, Ms. Carrie. I often found them sitting side-by-side, holding hands, sound asleep. Dad sometimes called his new friend by her own name, but more often by my mother’s name or by no name at all; he couldn’t remember who she was. He grew so attached to Ms. Carrie that he occasionally talked about marrying her. My pastor convinced him, though, that it wasn’t wise to marry someone whose name you couldn’t remember.

My dad must have decided they were married anyway.

I was at work one day in the middle of tax season (the joys of being a tax accountant) when, seeing a call from Bacon House, I snatched up the phone.

“Is my father okay?”

“We found him in bed with Ms. Carrie.”

“Since they’re not considered consenting adults,” the aide continued, “we need permission from you as well as from Ms. Carrie’s son.”

I was being asked to give consent for my eighty-four-year-old father to have sex with his eighty-three-year-old girlfriend.

Never in a million years did I expect this to be part of my primary-caregiver responsibilities.

The aide waited patiently while I thought.

He thinks she’s my mother. He also thinks sex outside of marriage is wrong, so he must believe he’s married to Carrie.

It was hard to know how to respond, but I ultimately said, “If he’s happy, it’s fine with me.”

When I talked to Carrie’s son later, he told me, between guffaws, that he’d received a similar phone call. He managed to say, “I told them it was fine with me, too, Karen, as long as they don’t tell my brother about it.” Some children are more open-minded than others.

The aides may have found Dad and Carrie in bed many more times. I didn’t want to know and was just glad to see him content in the time he had left.

A year later, Dad had another stroke from which he did not recover.

He died eight years to the day after my mother’s death. Perhaps it was God’s way of letting us know that she, too, was waiting for him with open arms.

Hopefully, he remembered her name.

About the author:   Karen Curran is a retired tax accountant living in Franklin, TN. Her interests include hiking, playing the piano, natural health and reading. Her stories have appeared in Pulse, Potato Soup Journal, Dead Mule School of Southern Literature, Horse Illustrated Magazine and in the anthologies The Swimmer and Other Stories of Life and The Labyrinth and Other Stories of Life. She regularly posts stories on her website. “I became interested in writing thirty-three years ago when my children were small. Their favorite stories were the ones I created. In the course of our busy lives, I set my pen aside, only returning to it as I contemplated retirement. Writing about past experiences helps me to better understand myself and God’s purpose for my life.”

PrevPreviousThe Eye of the Beholder
NextWhat Makes a Good Therapist?Next

5 thoughts on “Contented, Though Demented”