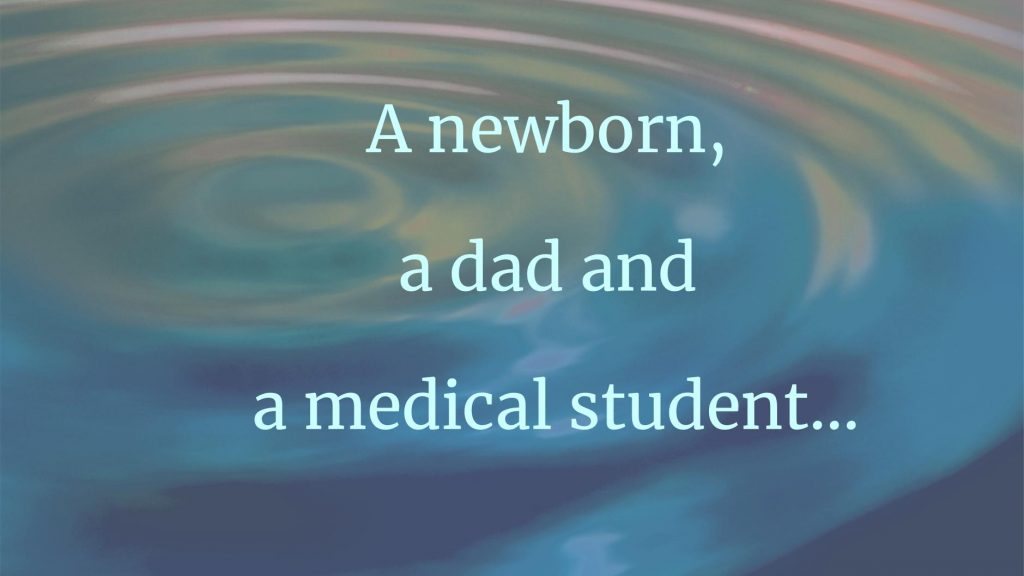 This time, the story was ours.

I was a third-year medical student, and I’d just finished my first morning in the neonatal intensive-care unit (NICU) as part of my pediatrics rotation.

The NICU team had welcomed me warmly at the start of morning rounds, but I couldn’t help feeling overwhelmed as the unfamiliar acronyms and measurements flew over my head. Starting a new rotation is always disorienting, but in this unfamiliar acute-care setting, I felt I had even more to learn than usual. I listened attentively, but it was like trying to follow a conversation in a foreign language that you’re only just beginning to learn.

I was eating lunch with the NICU team when the code was called. It was a Code Pink: a baby in distress. We dropped our cafeteria sandwiches and raced to the birthing center, the residents updating me in bursts as we ran through the hallways. I caught pieces of the story, but all I really understood was that we were heading to an emergency C-section.

The operating room swarmed with activity, and I followed the team inside, still tying the strings of my surgical mask. Everyone knew exactly where to stand and what to do–except for me. I was the only one without a designated role. No matter where I stood, I seemed to be in someone’s way.
I squeezed in by the corner of the infant warmer and looked over a sea of shoulders as the baby was delivered. I’d seen enough C-sections on my labor-and-delivery rotation to be familiar with the usual procedure, but this time everything seemed to be set on fast-forward. Within minutes, the baby emerged and was handed to the NICU team.
She wasn’t breathing. I caught only a glimpse of her before the team bent over her, working desperately to resuscitate her. The baby’s mother was equally obscured as the obstetrics team converged on her.
I held my breath as we waited for the baby girl to breathe. Finally, after what felt like an eternity, we heard a weak cry. Seamlessly, the team kept giving her oxygen, checking vitals and firing questions and answers back and forth as they transferred her into a waiting isolette to whisk her away to the NICU.
As the room cleared out, I came face to face with the only person who looked lonelier and more out of place than me: the baby’s father.
Wearing a patient gown over scrub pants, he stood looking absolutely shell-shocked as the team disappeared with his brand-new daughter.
I knew that, as the NICU medical student, I was expected to sprint after them: to keep up, to absorb knowledge and to surreptitiously Google the unfamiliar acronyms to figure out what was going on. It also made sense to go with the team because I wasn’t sure I could find my way back alone. Just as certainly, though, I knew that I couldn’t leave without talking to the baby’s father.
I barely knew what to say. But I saw the helplessness in his eyes–the desperate desire to do something, the feeling of being powerless to intervene or even to understand what was going on.

Feeling lost, I returned instinctively to the questions I’d asked new parents so many times during my labor-and-delivery rotation.

“She’s so beautiful,” I offered. “Do you have a name picked out?”

“Rachel,” he answered, tears running down into his surgical mask.
“That’s a beautiful name,” I said. As we stood there, adrift in the OR, this conversation felt like an anchor to something familiar.
“Is she alive?” he said suddenly. I could see how much it wrenched him to ask. He’d been a father for only a few minutes, yet he was being forced to ask the question all parents hope they’ll never, ever have to face.
Though the room was now less crowded, it suddenly felt hard to breathe. I felt a panicky urge to tell him to ask someone with more expertise–someone who had a clue about what was really going on. But then I realized that I knew the answer to that particular question.
It was the only question I could answer–the simplest and the most crucial. I didn’t know what all the measurements and acronyms and machines were, exactly, but I had heard baby Rachel cry, and I had seen my team giving her oxygen as they sped her away.
So I answered him, choosing my words with great care.
“She’s okay right now. My team will take excellent care of her in the intensive-care unit, and you can see her soon.”
I tried to smile reassuringly, then realized that my eyes were all he could see over my surgical mask. He thanked me and sat down by his wife, reaching for her hand. I left the room to find my way back to the NICU through the suddenly quiet halls.
The NICU was just as before: The machines beeped, the staff fired acronyms over my head, and the patients were impossibly, dizzyingly tiny. Baby Rachel was breathing more regularly, although my team still clustered about her, working frantically.
My team, I thought again, feeling just a bit less out of place.
I hovered in the back and tried to observe, but my mind kept returning to the look on the new father’s face when his moment of joy devolved into horror. I felt immensely thankful that someone had been able to take a few seconds to look him in the eye and congratulate him on his new baby daughter.
It didn’t have to be me, but it was. Everyone else in the room had stayed completely focused on saving Rachel’s life. She’d survived because everyone in the room knew exactly what to do, and they did it.
Nobody could fault them if, amid the chaos, they didn’t have time to look back at the family they’d left behind in shock and despair. They didn’t have time, but they did have me.
Although I didn’t have the clinical skills or knowledge to be useful, I did have the privilege–even the gift–of time. I may have been the only one in the room without a designated role, but I had found my place.

Perry Dinardo is a medical student at the Cleveland Clinic Lerner College of Medicine of Case Western Reserve University.  She plans to go into pediatrics. “I have always loved reading and writing stories, and as a child I wanted to grow up to be an author. Later, partly inspired by my own pediatrician, I decided to pursue medicine instead–but medical training has been so full of stories that I hope that maybe I can do both.”