“Mama,” a little voice pipes from the back seat. “Why is that boy in a chair?”

The sun is beaming into the car as we sit at a stoplight, waiting to exit a store parking lot. My two-year-old daughter has spotted a young man, barely twenty, who smiles weakly as he rolls by in an electric wheelchair, collecting money for muscular dystrophy.

“He’s in a chair because he needs help moving around,” I say.

“Because his legs need help.”

“Why? Because they don’t work?”

“Why are they broken?” she asks. “Is he broken? Why is he here? Where is his mama? Mama, where is the boy’s mama?”

“Dr. Lobozzo, you got any kids?” Gabriel asked, calling me by my maiden name rather than the married name I’d only recently begun using.

“No,” he continued with a sly smile. “Don’t tell me. I already know. You have two sons.”

I was newly married (without children), living in one of New York City’s boroughs and working in the Manhattan HIV primary care center I’d joined after getting my psychology license. The center integrated mental health and social services into the HIV patients’ primary care.

I had been seeing Gabriel for three years. Once a week he’d come for psychotherapy, braving a two-bus commute in a clunky, red electric wheelchair, adorned with a horn that he’d toot to announce his arrival. The chair also sported a flag, bumper stickers and assorted other trinkets given to him by his home health aide, a heavy-set woman he affectionately called “Mama Rosa.”

Twenty-two years earlier, Gabriel had been born HIV-positive. His mother had been neglectful, if not abusive, so he’d spent his childhood shuttling from one foster home to another. Gabriel’s chronically poor health had gone unnoticed and untreated until his adolescence, when a sudden stroke led to a prolonged hospitalization, discovery of his HIV status and a strained reconnection with his mother–now also known to be HIV-positive–and older siblings.

When I first met Gabriel, he was already very ill. His T-cell-less body had withstood cryptosporidium, toxoplasmosis and just about every other opportunistic infection. He lived in a nursing home, cared for by an assortment of home health aides. His family contacts were limited to occasional phone calls and (broken) promises of visits. The resulting isolation caused him constant distress and longing.

Understandably, Gabriel’s caregivers had become his surrogate family. As he grew sicker and weaker, he turned more and more to his doctor and to me for nurturance, fantasizing about the rich family lives we supposedly led.

Therapy was challenging: Gabriel vacillated between a wish for life, for family, for meaning, and an inner pull towards despair and death. In some therapy sessions he talked about the future, especially one where he might someday have a wife and children. In many others he spoke incessantly of his impending death.

Sadly, maddeningly, as his mood swung up or down, so did his adherence to his HIV medication regimen. When feeling more hopeful, he’d take the life-saving drugs; in darker times, he’d stop. He was often hospitalized for what was expected to be the last time, but somehow he’d always bounce back.

Gabriel’s doctor and I did our best, through counseling, to help Gabriel break this self-destructive cycle. When our efforts failed, we became more like insistent parents pleading with an unwilling child.

Through it all, Gabriel’s health grew steadily worse–and his fantasies of my “sons” more vivid. During this last hospital stay, he imagined me leaving his bedside to run home and care for them.

“I know you have to go, right? Or maybe you can stay?” he asked weakly, then continued, “I bet your sons are waiting for you at home to cook for them. I bet they want their pasta, Dr. Lobozzo.”

“Yes, I need to go soon,” I responded quietly, glancing at a nurse in the corridor and then looking out the window. The hot July sun was fading slowly into early evening. I saw Central Park in the distance and thought longingly of going for a solitary evening run. I looked back at Gabriel, wishing that his mother were here to reprieve me of the heaviness in the room and wondering how much the very pressure of his need kept her at bay.

Trying to bridge the distance between Gabriel and his absent mother, I’d often left messages inviting her to a family session, and the hospital staff had called her each time he was admitted. Yet she never showed. In fact, I’d never even spoken directly with her on the phone. Wrestling with Gabriel’s bottomless, unmet needs, I struggled to find some empathy for this shadowy woman who’d caused her child so much pain.

He’d been looking forward to this summer, to spending his favorite August days sitting outside, watching the world go by–but he was also growing sicker and sicker. The previous Christmas, he’d brought us gifts: a blanket for his doctor, whose hands were always cold; a bottle of olive oil for me, “to cook a nice Italian meal for your boys.” In his own way, I think, he knew he had no more Christmases left.

“It’s okay, you can go,” Gabriel sighed. “It’s late, and your sons must be hungry.” Maybe he needed an excuse for why I didn’t stay longer, as a devoted mother might. Or maybe he imagined himself sitting next to his brothers at our dinner table, eating the meal he’d helped to prepare.

Gently, I said goodbye and left.

After my visit, we again called Gabriel’s mother, who again did not show up. She was, I reflected, becoming as much of a phantom to me as my “sons.”

I went on vacation at the end of that long, hot summer, while Gabriel was still in the hospital. And while I was away, he died. I can still taste my disbelief: the shock that this ending, so long anticipated, had happened so briskly during my few days away.

The hospital staff told me that, in Gabriel’s last days, his mother appeared. I still wonder what words and gestures passed between them at the end. I hope that he felt nurtured and mothered in the ways he most needed, and by the person whose caring he most craved. Above all, I hope their time together brought them both peace.

I would have liked to meet Gabriel’s mother–to have had a chance to understand her absence before Gabriel faded away and I too moved on. But perhaps this was selfish. Maybe it was better that Gabriel’s final moments with his mother, brief as they were, be private.

The traffic light turns to green. We leave the young man in the wheelchair.

My thoughts of Gabriel fade. Driving up the hill, I brace myself for more questions.

“Mama,” she repeats. “The boy is gone….But look!” she shouts brightly. “I can see the moon! Mama, does the moon wear pajamas?”

I look back at my smiling child and her sleeping baby brother, and my heart breaks just a little bit. I’m struck by how easily what we love can be lost. Our ghosts and our living loved ones dance together across time and place, teaching us to be stronger parents, therapists and people.

Now Gabriel is a phantom–a boy sitting in a wheelchair and smiling a big, goofy smile, a boy who just wanted his mother–and the two children he imagined are real. They toddle through the world, happy and strong, and blissfully unaware of angels and phantoms, of mothers leaving children and of babies born broken and reaching out for mothers all around them.

Joanna Dognin is a clinical psychologist who has worked in primary-care settings for the past ten years. After several years on the behavioral science faculty at Montefiore Medical Center, where she taught family medicine residents, she is starting a new position at the Veterans Administration NY Harbor. There she will develop integrated models of care and train medical and mental health staff in primary care/mental health integration. As a therapist, she lives in the world of stories, but this is her first published narrative. 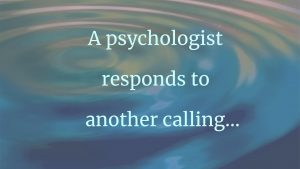 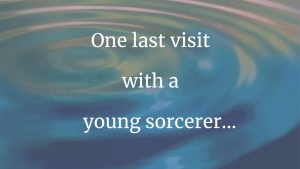