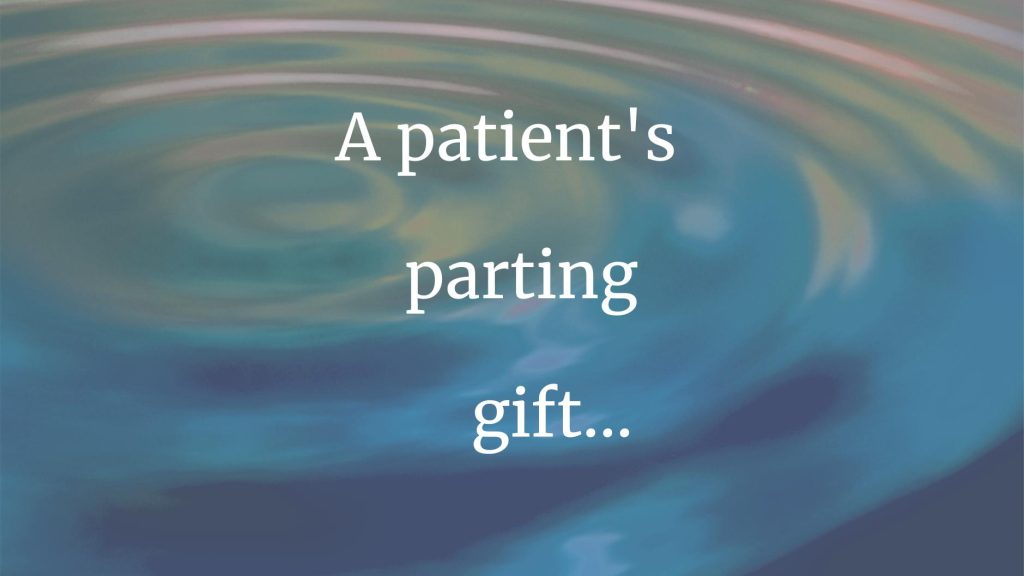 Two years ago, as a fourth-year medical student, I was on my internal medicine “acting internship” on the general internal medicine floor. This service was known for great teaching and complex cases—and notorious for emotionally heavy experiences.

With my month as acting intern winding down, and graduation as an MD just months away, I felt some trepidation. Yes, I had grown considerably during my weeks here; I’d been privileged to work with residents and attending physicians of admirable patience and empowering teaching styles. Granted more autonomy and trust with each passing day, I was feeling closer to being a doctor than I’d ever felt before.

Still, I felt hesitant. The ever-present imposter syndrome was rearing its head. Though I felt my abilities progressing, everything I learned seemed only to highlight even more that I didn’t know.

How can I possibly be ready to call myself someone’s physician mere months from now?

Enter a man named Ed, a large-framed middle-aged man with the shrunken, worn appearance of someone much older. Though plagued with chronic heart, vascular and liver disease, Ed was blessed with a warm friendliness. He grinned, cracked jokes and radiated positivity.

Each day, Ed invariably greeted me with, “Good morning! It sure is a nice day today. How are you this morning?” He frequently poked fun at himself, but no one else in the room was safe from ribbing either. When introducing me (a short-statured, baby-faced twenty-six-year-old) to his visiting brother, Ed quipped, “This is the medical student who’s been taking care of me. I’m not sure he’s old enough to drive a car, but he does a good job.”

Ed was always accompanied by his wife, Mary, who clearly adored his gregarious silliness. She was his primary caretaker, ensuring that he made his doctor visits and took his plentiful medications.

I admitted Ed to our service because of breathing troubles. Fortunately, all he needed was a minor medication change. During his short stay, both he and Mary were pleasant and grateful—a bright spot in my workday. As I stressed and struggled to prove myself, they lightened my mood and soothed my nerves with warmth and genuineness. As with all patients, though, my happiest moment with them was when they left the hospital and headed home.

Unfortunately, the respite was brief. A few days later, Ed was back in the ER, complaining of trouble breathing. It was late in the evening, and as I headed to the ER to see him, I was dragging. Entering the cold, sterile room, I saw Ed lying in the bed, sweating profusely, with Mary standing next to him. As ill as Ed clearly felt, his face lit up with a smile, and he spread his arms wide:

“Ahh, welcome to my chambers. We were hoping you’d be back to see us.”

Ed was admitted again, only to spend the weekend waiting to have his procedure, a non-emergency diagnostic heart catheterization. I spent some time with him and Mary and their visiting family members, explaining the tests and treatments. But mostly I listened as Ed recounted theatrically embellished stories of questionable truth but undeniable entertainment value. Mary laughed along with everyone, but I sensed her unspoken worry: Ed was getting sicker, and she knew it.

As it happened, my last day on the service arrived just twenty-four hours before Ed’s procedure. That evening, preparing to leave the hospital, I stopped by his room to say goodbye. Ed and Mary were profusely thankful, which caught me off-guard.

If anything, I thought, they ought to be frustrated at having to wait around for something to happen.

They surprised me with a handwritten card and a small gift.

I opened the card.

“Thank you for the long hours,” it said. “Treat others the way you treated us, and you’ll be a great doctor.” As I read this, tears welled up.

With the note was a small wooden figurine–an angel in a white robe. Etched on the base of the angel’s robe were the words “Angel of Healing.” More tears stung my eyes. I felt taken aback, even a bit embarrassed. My “long hours” were student hours; others in the hospital were working far longer and carrying far more responsibility. I was not the one deserving of this gesture.

Nevertheless, I did my best to express my appreciation. Through teary eyes, I said, “It was a true pleasure taking care of you. I hate that it was here, under these circumstances, but I’m grateful to have gotten to know you both.”

The following morning, off service, I savored the luxury of sleeping in and awoke in peaceful silence, still on an emotional high from the prior evening.

Curious about how Ed’s procedure had gone, I opened his medical record from home. Reading the chart, I felt sick: Ed had suffered an unexpected brain hemorrhage. Emergency neurosurgery had been unsuccessful.

In the midst of my grief, I realized that one of his last actions had been to gift me something special. He’d given me the card and the angel, yes—but more importantly, he’d given me hope, legitimacy and a template for lifting others up. He’d thanked me, when I should have been the one thanking him.

Fresh tears and grief engulfed me as I inspected the Angel of Healing figurine. It felt like a mockery.

I didn’t heal Ed at all, I thought. He was gone before we could even diagnose him.

I did not heal Ed’s disease, but Ed healed my trepidation and lack of confidence. I felt ready to be a doctor.

I never spoke with Mary again. I was unable to make it to the hospital in time to see her after Ed’s death. I considered a phone call, but somehow that didn’t feel adequate. What could I possibly say to her? Ultimately, I decided that perhaps our final interaction, though short, contained all that needed to be said by two mutually grateful parties. Our heartfelt exchange was an appropriate parting of ways.

Now I saw the Angel of Healing in a new light. It became a cherished reminder of two wonderful people, of positivity and of the power of truly connecting with others. It reminds me to this day that medicine is a soulless science when not practiced with humanity. It reminds me that I may not always cure, but I will always hold the power of healing.

The angel now resides in my office. Though faceless, it contains a million faces: I see Ed’s face, along with the faces of all my patients. It watches over me, serving as a ward against insecurity, jadedness, indifference.

It truly is an Angel of Healing.

J. Alan Gambril is an internal medicine and pediatrics resident physician at The Ohio State University Wexner Medical Center and Nationwide Children’s Hospital in Columbus, OH. After residency, he plans to pursue a fellowship in cardiology. “I have always been an avid reader and admire those who can express complex emotions through words on a page. During my undergraduate years I began writing as a reflective practice. As my education progressed, I found reflective writing enhanced each experience. Writing is now a primary way for me to process the emotionally heavy experiences that are so pervasive in the field of medicine.”

8 thoughts on “Angel of Healing”