A Time to Mend 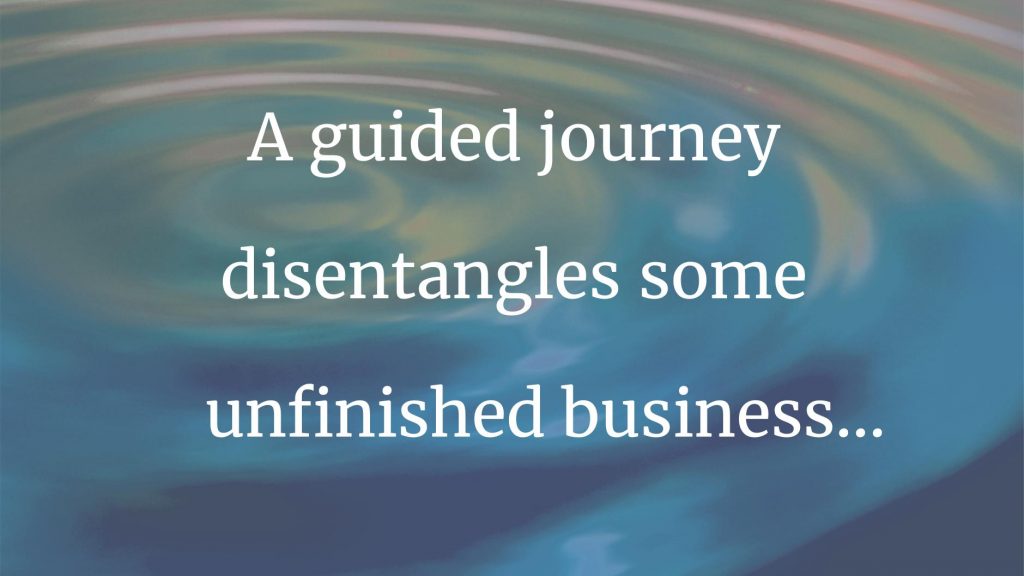 “After eighty-five years of life, I still don’t know what death is,” said Lonnie, as I sat beside her bed in the nursing home. “I just know it scares the heck out of me.”

Despite decades as a hospice social worker, I don’t know what death is either; but I’ve spent much time with patients exploring the question together.

“What scares you?” I asked.

“I’m afraid of being alone; afraid I’ll disappear forever; afraid of being judged for my mistakes. Take your pick. Besides, no one has ever died and returned to tell us what happens.”

“That depends,” I said. “Many people have died briefly, then been resuscitated. Some remember their experiences. Are you interested in what they say?”

“There are decades of research into near-death experiences, or NDEs,” I said. Leaving aside the debate about NDEs’ origins, I described common features—a sensation of consciousness separating from one’s body, of moving to a place of peace, of having a panoramic life review, meeting deceased loved ones or helpful beings.

“Many report experiencing unconditional love and an expanded sense of connection with others or with the universe. Some even feel disappointed to return to their bodies,” I continued.

“The people who’ve had NDEs are emphatic that consciousness survives, that there are others waiting for us when we die, and that we will not be judged—except perhaps by ourselves, when we realize how many opportunities we lost during life to act with kindness and love.”

Two weeks later, I came back for another visit. Stacked on Lonnie’s bedside table were books about NDEs and the people who’d had them.

“I asked my sister to get me these,” she said.

“What are your thoughts about them?” I asked.

“What about?” I asked gently.

“You remember about Vinny?”

He was Lonnie’s only child. Their relationship had been stormy. For decades he’d been lost in a world of drugs, violence and periodic demands for money. Sometimes he’d get clean, and Lonnie’s hopes would stir, but he always disappeared back onto the streets.

Recently Vinny had shown up out of the blue. This time, he’d said, he was serious about turning things around—if only Lonnie could give him a loan till he got back on his feet.

Now her eyes brimmed with tears.

“Those books say that some people have life reviews where they see things from the other person’s point of view. I keep thinking about how it felt for Vinny when I threw him out. I keep wondering if I hurt him.”

We talked about the years of heartache, lies and shattered hopes; about how she’d grown cynical after being burned one time too many. And we talked about the part inside her that flamed with inextinguishable hope and love.

“I wish I could have one of those near-death experiences without actually dying,” she mused. “Maybe it would help me know what to do.”

“Well, we could use guided imagery to simulate a near-death experience,” I said. “But it could get intense.”

“I’d like to try that,” she said. After making sure she felt safe with the kinds of images we’d be using, I guided Lonnie into a relaxed state and had her close her eyes and focus on my voice.

“Feel your body getting heavier; your spirit getting lighter. When you’re ready, imagine consciousness lifting out of your body.”

When she saw this in her mind’s eye, I instructed her to feel a gentle pull toward some distant place of peace and love. I asked what she was sensing and feeling.

“I see beautiful multicolored lights. It feels warm and inviting. There’s a bright white and purple light up ahead. I feel at peace.”

When she reached the light, I asked, “What do you see?”

“A beautiful mansion made of crystal.”

“Imagine someone who loves you is standing nearby. Who do you see?”

After giving her time to enjoy the reunion and feel her mother’s love, I asked Lonnie to imagine a large movie screen encircling the mansion.

“Stay beside your mother. Now imagine scenes from your life appearing on the screen. It can be anything. No experience is too small. Everything is important. Let me know what you see.”

“Oh, it’s wonderful. I’m growing up on my parents’ farm. I’m down by the pond where my brothers and I would swim.”

“See yourself growing older, living your life. Go to the day Vinny was born. What do you see?”

She smiled. “He’s a big baby; over ten pounds. I’m holding him for the first time.”

“What are you feeling?”

“Love. Happiness. He’s so sweet. I can feel his little heart beating.”

Over several minutes we paused at various times throughout Vinny’s life, eventually arriving at their last meeting. I asked Lonnie to imagine it from Vinny’s perspective.

“What do you notice?” I asked.

Tears ran down her face. “Sadness. Hopelessness. I feel so alone, like no one cares about me. I’ve screwed everything up, but it’s not what I wanted to do. I’m hurting. I’m confused.”

I asked her to be aware of her mother beside her.

“Feel your mother’s love, and remember there is no blame, no criticism—only you and Vinny, doing your best in a hard situation,” I said. “Now, imagine that your mother has a message for you. It may come in the form of words or a feeling. It may be a picture popping into your head or a memory. Tell me when you receive the message.”

She was quiet for a long time, then her eyes widened, and she started sobbing.

Reaching for the silver chain around her neck, she pulled out the heart-shaped locket on it. She opened it and showed me a tiny black-and-white photo of a young mother holding an infant.

“It’s me and Vinny,” she said. “Mama took me back to the exact moment that photo was taken. I’ve kept it close to my heart through all the ups and downs.”

“What do you make of that?”

“Vinny and me are connected no matter what. I’ve got to forgive him, and myself. I’ll be gone soon, and he’ll be even more alone. But I don’t know how to forgive…I just don’t know how.”

She went on, “I’m worn out, Scott. I just want to die in peace. Do you think there’s a way to let him know how much I love him and how sorry I am, without throwing the door open for more drama?”

It was time for me to leave, so we agreed to think about her question and talk about it more on my next visit.

By then Lonnie’s condition had changed dramatically. She was barely eating, mostly asleep. But she’d found an answer to her question.

Too weak to open her eyes, she asked me to open an envelope on her bedside table.

It held a letter to Vinny in which she reflected on his life, underscoring how much she loved him and coaxing him to believe in his inner strengths waiting to be unlocked. She apologized for the times she’d hurt him and forgave him for any pain he’d caused her. She painted a picture of her hopes for his future.

“I’m using this time to pray and to dream about my boy healing,” she whispered. “I may never see him again in this world, but I know he’ll feel my love.”

I leaned close so she could hear me.

“He will feel it. It’s never too late to change your life review, Lonnie.”

Eyes still closed, she mustered a smile. Soon she was fast asleep.

The following visit was my last. Lonnie was in a coma. Her sister Penn was there, and we discussed Lonnie’s final arrangements.

At one point Penn reached over and unclipped the locket necklace from Lonnie’s neck.

“It’s not that I don’t trust people, but I don’t,” she said, only half joking. “I promised her I’d put this with the letter she wrote and get it to Vinny.”

“How will you track him down?” I asked.

“Oh, I have my sources,” she said solemnly. “I will get him this letter.”

She gave me a quizzical look. “Lonnie made me promise that, when she’s gone, I’ll take five minutes every day and send Vinny love. I asked how long I have to do it, and she said till Vinny or I was dead. Does that sound odd, or what?”

I looked at Lonnie. Her respirations, rapid and shallow when I arrived, were more relaxed now…as though she might be listening.

Scott Janssen is a clinical social worker with University of North Carolina Healthcare Hospice. He has published numerous articles in professional and literary magazines and academic journals. His novel Light Keepers was published in 2015; his book Standing at Lemhi Pass: Archetypal Stories for the End of Life and Other Challenging Times explores the use of therapeutic storytelling with hospice patients. “I’ve often used guided imagery with patients like Lonnie. It’s a mystery to me whether the insights people receive come from a transpersonal source or an internal place of wisdom or intuition. Whatever the source, I trust that everyone has access to such wisdom, and a big part of my work as a hospice social worker is helping them tune into it during times that can be marked by disorientation and grief.”