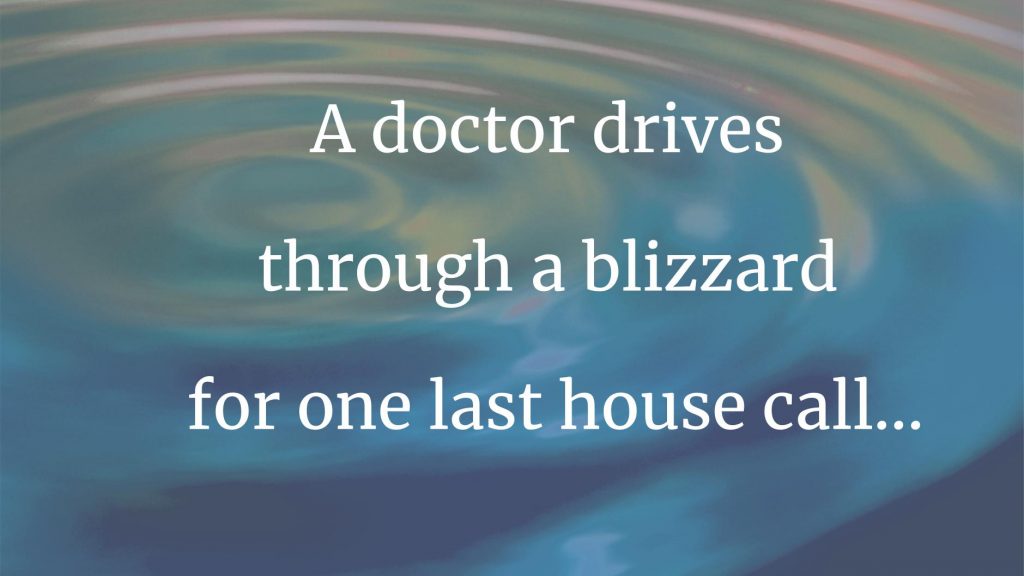 I’m not on call for my patients today–except for one. Daisy has been in my care since the early 1970s, and given the risk that she may suffer a serious downturn, I’ve instructed her nursing home to call me whenever necessary.

This is that call. Daisy, my dear lady, the old artist, is dying.
Throughout her nine decades of life, her passion for poetry and painting, and her ability to engage the people around her, have been her constant companions on what has been a fraught journey. Her heart, however, has grown weary and is finally giving out.
I’m not yet ready to part with the bright spirit that is Daisy. I want one more taste of the vigor that colors our every encounter–what her daughter once called “her zest for doing, enjoying and producing.” It’s a spark I’ll sorely miss.
I climb into my car, barely remembering my gloves and scarf in my haste. I drive into the storm.
When I first met Daisy, she’d been widowed for years and was living with her son, whom I also treated. He battled schizophrenia, but was gentle, easy. Daisy, not so much.

Early on in our relationship, Daisy would delight in describing her interactions with children or playing with a new collie in her neighborhood or painting word pictures of a perfect day of pure white clouds and deep blue sky. Her total engagement with life was irresistible.

Gradually, though, ailments small and large started to bedevil her. She complained of troubles with her eyes, her ears, her nose, her skin. No matter the ailment, she reacted with a storm of frustration–a “nervous rush,” as her daughter called it. It was a lashing out, like that of a child, at forces that defied her ability to cope emotionally or artistically.

Daisy’s children attributed these “rushes” to their mother’s lifelong hypochondria.
“She’s always been like this,” they said. Daisy, bristling, defended her passionate nature, comparing it favorably to that of her more passive sister, who was preferred within the family.
When Daisy was in her eighties, her son died peacefully in his sleep. This relieved Daisy of her caretaking burdens; but she grew lonely. In response, her family moved her into a nursing home. Invigorated by the attention of fellow patients and staff, she began to thrive again. Her paintings grew more vibrant, and her mood improved. During checkups, rather than leading with a complaint, she’d hold up her latest painting or tell me of a companion with whom she’d dined.
I arrive at the nursing home, park on a snowdrift and trudge toward the building.
I know what I’ll see, I think, reviewing the list of visible signs of imminent death: the sinking into a coma; the breath growing noisy and irregular; the skin turning some dismal version of blue (oxygen starvation), yellow (liver failure) or grey (kidney failure).
Entering the room, I see Daisy in bed, her skin blue and cold. For succor, perhaps, I imagine her keeping watch for the angel of death, while also inwardly debating whether to release herself from suffering and into the inevitable. In my mind’s eye, Daisy holds the flower that bears her name, plucking one petal after another from its brilliant yellow center and asking, Shall I leave? Shall I stay? It’s as if she’s joining me in wondering if God is ready for this particularly plucky Daisy.
On the walls of the room hang Daisy’s exquisite paintings, their rich colors a glowing contrast to the cold white blanket outside the window. Perched to her right is a cardinal, brilliantly red; to the left, a sailboat on a placid sea; above her, a spray of flowers in full bloom. Scattered among these are country scenes and a needlepoint of her beloved cat.
The stuff of life, and of her life–profound in its simplicity, and because Daisy has deemed it worth painting.
The hiss of the oxygen tank shakes me from my reverie. My eyes are drawn to the dull green device, its tubes dutifully delivering to Daisy what little life and time remains.
I think how dry the air must be for Daisy’s raw nasal passages–how she always complained of her allergies and the itching pain they caused. I wish I could shut down the tank, but I imagine it’s keeping her alive. That’s helpful to me, and to the staff here, all of whom have grown to love Daisy. I reflect that it may also enable her family to see her one last time before the end….
Studying her calm, determined face with its dry, wrinkled, eczema-patched skin, I recall how vexing Daisy found her infirmities.
We pretty much had a handle on her big health problems–her failing heart, a touch of angina, some hypertension, a little gout–but the lesser ones still plagued her. There was that sluggish gut, which for years demanded a trunkful of bulking agents, stimulants and stool softeners. “Take each dose with a full glass of water,” I’d tell her, knowing that it was the water that really helped.
I remember, too, how inadequate I’d felt, trying to find something to relieve the red, irritated skin on Daisy’s face, hands and limbs. Time and again I’d order a new cortisone spray to keep her nose open, steroids to ease the itching and burning in her ears and eyes, and ointments, emollients, salves, solutions and salt baths for her skin. I’d clean out her ears, then refer her to the ENT doctor for more in-depth therapy.
“While you’re at it,” I’d implore him, “see what you can do about those darn nasal passages–they’re driving us all nuts!”
Finally, to Daisy’s mounting impatience, her vision began to fail. Her clouding lenses slowly stole her ability to paint, dampened her spirit and closed her off from the world she’d embraced so exuberantly. Trying to help her manage the upset, I prescribed yet another tranquilizer, but it was of little help.
All the while, her terrible nervous attacks continued. The family were at their wits’ end–with both of us.
“Why the expensive medications?” they’d protest. “Don’t you know she’s a hypochondriac?”
Recently, without malice, I’d suggested that they, and Daisy, might be happier with another doctor. Daisy’s daughter confided that, when Daisy heard this proposal, she grew distraught, declaring, “I don’t want to leave Dr. Fennelly!”
So we compromised: I prescribed a new tranquilizer, thinking, Perhaps this one will work.
It did not. “Daisy, be patient,” I pleaded, explaining that it can take three weeks for the medication to do its work.
Daisy gasps, startling me back into the present. Her hand presses her chest.
And she is gone.

Sadly, her family hasn’t arrived in time to say goodbye. I’m grateful to be a stand-in at the end.

There are times when our deep connections with others dissolve the distinctions between family, friend and caregiver. We all labored, through love, to anoint Daisy’s wounds–including, I hope, some of the spiritual ones.

I couldn’t not be with her.

Rest, Daisy, in love and peace, I think. You have earned it.

Joseph Fennelly was an attending physician in the department of medicine at Morristown Medical Center, NJ, for more than fifty-five years. He chaired the bioethics committee of the Medical Society of New Jersey and in 2015 received lifetime achievement awards from the Society and from Morristown Medical Center. In the mid-1970s, he was asked by Joseph and Julia Quinlan to care for Karen Ann Quinlan when, in the first right-to-die legal case, the New Jersey Supreme Court gave medical decision-making to her father. “Writing not only helps me to deal with the proximity to suffering; it allows me to become both an observer and a participant in the ongoing narrative at the margins of life and death–perhaps strengthening my capacity for empathy.”

4 thoughts on “A Flower in Winter”

Leave a Reply to Kimberly B. Cancel Reply