The new parents,
both rabbis,
have dark circles
under their eyes.

Their newborn was created in a lab,
with life cells engineered
by white-coated scientists.
The miracle baby is named
for the angel, Gabriel.

They hold their infant wrapped
in a blue blanket
knowing his path will be free
of the defective Jewish
gene they both carry.

You are loved baby Gabriel,
with your flame-red hair
and your robin-blue eyes.
May you settle into the home you were given
knowing you were created by
something more than an accident,
more than a slip
more sacred even than desire.

Karen Ross is a retired psychologist and a vice-president of the Dystonia Medical Research Foundation. “Dystonia is a neurological movement disorder that affects the muscles. One type is caused by a Jewish genetic trait that is dominant, not recessive, unlike most other Jewish genetic disorders.”

“My son, Mike, a rabbi, was born with generalized dystonia, although he showed no symptoms until he was thirteen. He became more and more debilitated over the years and as a last resort decided to have deep brain stimulation (DBS) surgery. In a seven-hour procedure with no anesthesia, implants were put into his brain and hooked to wires that run down inside the neck and connect to two battery packs under the skin. This was indeed a medical miracle, because now, eight years later, Mike is free of all symptoms, although this is only a treatment and not a cure.

“Now to Gabriel, my five-year-old grandson, and how he was conceived. Mike and his wife, also a rabbi, did not want to have a child who might have dystonia. After trying a number of in-vitro techniques, they decided on using a donor egg with Mike’s sperm and employed preimplantation genetic diagnosis. Four eggs were implanted, three miscarriages occurred, and the last egg became Gabriel, who, with his red hair and blazing blue eyes, looks like no one on either side of the family. Gabriel is our medical miracle number two.

“I do not consider myself a poet, but I’ve felt compelled to tell these stories in the best way I can. My story is a story of the heart in medicine, and I feel so grateful to all of the medical professionals involved in these two medical miracles. There is no way to really let them know how magnificent they are. This is my way.” 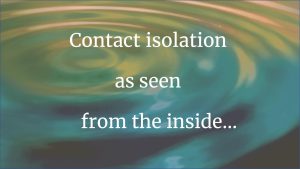