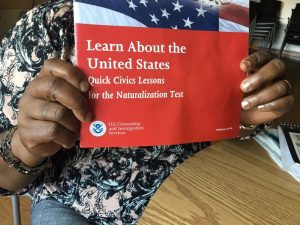 “The [immigration officer] said, ‘Well, you’re applying for your citizenship. I’m just going to ask you a few questions.’ She had a stack of books like this on her desk for me. She asked me, ‘Name one of the longest rivers.’ And I said the Missouri River. She said, ‘Who votes for the president?’ I said, ‘Citizens 18 and older,’ like we were having a little chat. And she said, ‘Oh you planned for this! You know it all!’ I said, ‘Yes ma’am.’ And she said to me, ‘This is your day. You pass.’ And I started to cry.”

About the Seeing Immigrants Series:

From the time she was a medical student, Joanna Sharpless has been collecting immigration stories to learn more about the struggles and celebrations of being an immigrant in America. For a social medicine project undertaken during residency, she combined excerpts from interviews with a half-dozen of her immigrant patients with photographs of these immigrants holding something of importance to them. Three of these photos and excerpts are presented here. More will be featured in a later issue of Pulse. All of these photos and excerpts are exhibited at the family health center where Dr. Sharpless saw patients during her residency–in the hopes of creating a welcoming atmosphere for current and future immigrants. For Joanna Sharpless’s own story of her interest in immigrants, see “My Immigrant Patients [1].”