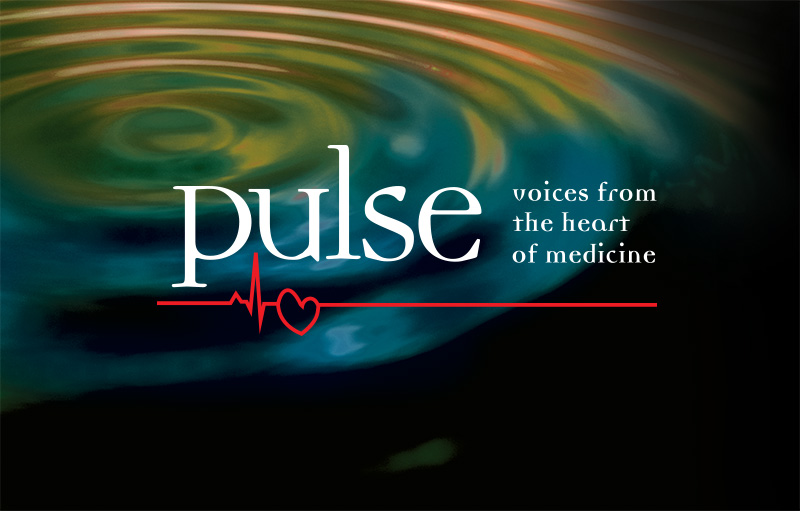 In 1983, the community hospital where I worked did not yet use the acronym AIDS. We used another one–FUO, for fever of unknown origin–which was emblazoned in marker on a red card on the doorjambs of certain private rooms. These rooms each had an anteroom with a sink and a hamper. This is where the donning and removal of protective suits took place. In this 4-foot-by-6-foot space between the hall and the patient’s room, the garbage cans bore biohazard symbols, and the red bags inside them were doubled and then encased in a third, clear garbage bag–to protect us, we were

I was midway through my internal medicine internship when elderly Mrs. Armstrong was transferred to our service for treatment of a pulmonary embolus (aka PE–a blood clot in the lungs) after a knee fracture repair. I remember thinking, disparagingly, “Surgeons should be able to treat a PE!”

The following morning, our team rounded on our patients and hurriedly wrote orders and notes because Susan, my senior resident, and I would be in clinic all afternoon. As we worked, another resident, Greg, stopped by and invited us to a party that evening. “I hope I can come,” I said. “If I

Greg Mahr July 18, 2016 No Comments
The insistent chirp on the phone was a reminder from Fran. “Don’t forget to stop at the compounding pharmacy.” For $58 cash these specialists turned a pill into a cream. GERD made Fran intolerant of most oral medicines.

Tired from the long drive, I thought back on my years of marriage. Back pain was the first problem, I think. Then GERD, then migraines, dizziness, TMJ, panic attacks, fibromyalgia. They were all tough, serious problems. But all together?

Sydney Brown July 9, 2016 No Comments
During my first year of anesthesia training I was called to open an emergency airway for a patient struggling to breathe in the Medical ICU. When I arrived amid a flurry of activity and billowing yellow isolation gowns, the monitor was crying DING DING DING to alert us that the patient’s oxygen saturation was hovering in the mid-80s–dangerously low. The patient’s small face was obscured by the oxygen mask, his frail body covered by a hospital gown.

The patient was too confused to follow any instructions, and the loud noises of the ICU machines didn’t make things any easier. I tried to

It Doesn’t Work That Way

Jenni Levy July 5, 2016 1 Comment
My second month of residency. My first solo thoracentesis–a procedure to remove fluid around the lung. The supervising physician I’d just met watches over my shoulder as I carefully count and percuss the rib, fasten the drape in place, gown, glove, and cleaned off the skin.
Infiltrate with lidocaine…good. Thread the catheter into the trochar…good. Attach the stopcock…good. Make sure it’s open in the right direction. Puncture the skin, pull back on the syringe, fill the syringe with fluid. A sigh of relief–it’s in the right place. Turn the stopcock, remove the syringe…. The supervising physician makes an inarticulate
Read More »

It was a grim night. A man had stumbled, drunk, into the street and been hit by a car. The car drove off, but bystanders called 911. The man was strapped to a bright yellow gurney and brought to the emergency department in an immaculately clean ambulance. He himself, however, was disheveled, soiled and violently combative. He fought. He yelled. He spat. He smelled. He was disgusting.

Everyone deserves good care, thought I. My evaluation found him to be merely drunk. I considered imaging studies, but they would have required general anesthesia, which didn’t seem advisable given the man’s condition. Instead, I

A Plea for Forgiveness

Gabriele Grossl June 30, 2016 No Comments
I am in a dark place, and all my senses riot against me.

Despair tastes sour and rotten on my quivering lips. Dishonor feels heavy and tight on my heaving chest. Dejection means hearing only my own sobs through my covered ears. Disgrace sees only my mistakes, and with blurry, red eyes. Depression smells like sweat and fear, even through a clogged nose.

It’s Only One IV

I was lying in the preop area, waiting to be taken in for abdominal surgery, when a nurse came along with a bag of liquid and hung it from my IV pole.

“It’s an antibiotic,” she replied.

“I’m not scheduled to get an antibiotic,” I said.

Henry Schneiderman June 29, 2016 No Comments
After the above-knee amputation of her second leg, the still-too-young diabetic woman did not wish to fight her terrible illness anymore. In due course, she qualified for inpatient hospice.
Today I came to the bedside as the end was approaching, her pain well-controlled with a morphine infusion and her agitation now departed along with most of her speech and perception. Recognizing that my physical examination should be short and tailored to her needs, I planned simply to observe her eyes, her skin, her breathing and her responsiveness. To make sure she was dying comfortably, free of suffering.
I had met her supportive, anguished husband many times
Read More »