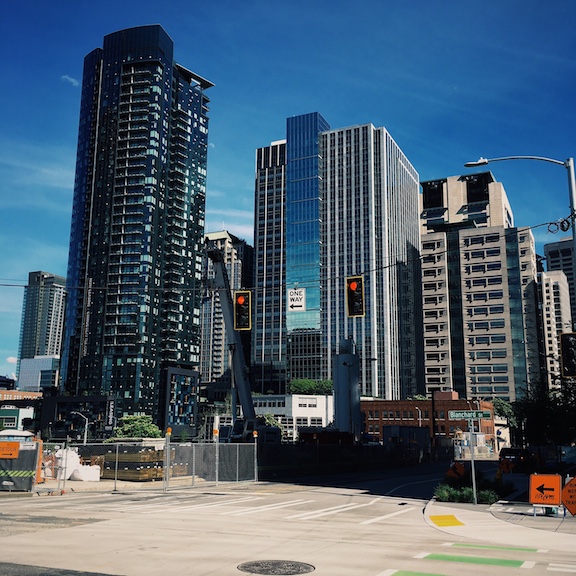 Justin Sanders is a palliative-care physician in Boston. From today, he is the former visuals editor of Pulse. “I’m going to miss this job, and miss combing through the wonderful images sent by our readers. Fortunately, I have lots to keep my hands full, including a new baby.” He still loves reading the New Yorker and cooking pizza at home.

“With the arrival last week of a second child, the corralling of the first, the pressures of building a career, and my ambivalence about passing on the responsibilities of editing this wonderful part of Pulse, it was helpful to come across this scene. Despite the seeming chaos of building a life, of saying hello to new things and goodbye to others, it’s helpful to remember that life goes one way: forward.” 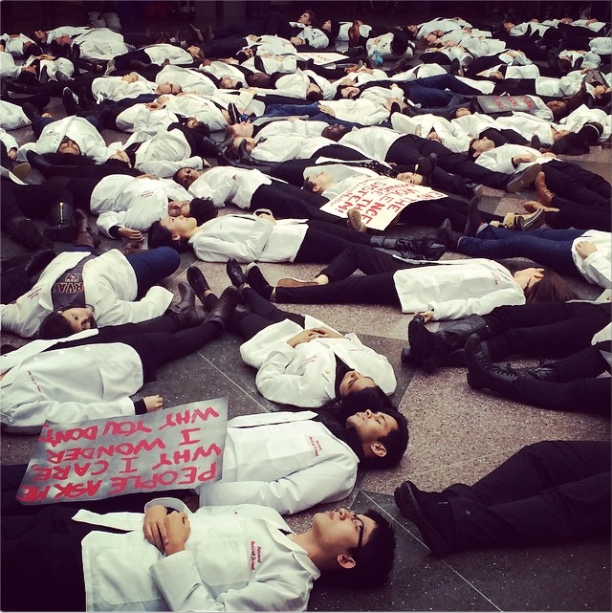 Justin Sanders trained as a family doctor and is now pursuing a career in palliative care. He has written stories for Pulse and serves as its visuals editor. Having studied art history and worked in the fine arts, he has a deep faith in their healing power. Justin and his wife live in Boston. When not tending to their ten-month-old daughter, Cecily, Justin loves to mess up recipes from a growing cookbook collection and to read The New Yorker.

“On December 10, hundreds of medical students around the country held ‘die-ins’ to protest racist criminal policing and our broken criminal justice system and also to acknowledge and mourn the lives of black men, such as Eric Garner and Michael Brown, who have died unecessarily at the hands of the police. The students joined tens of thousands who have protested across the country in the wake of the grand jury rulings against indictment of the police officers involved in these cases. Moments … 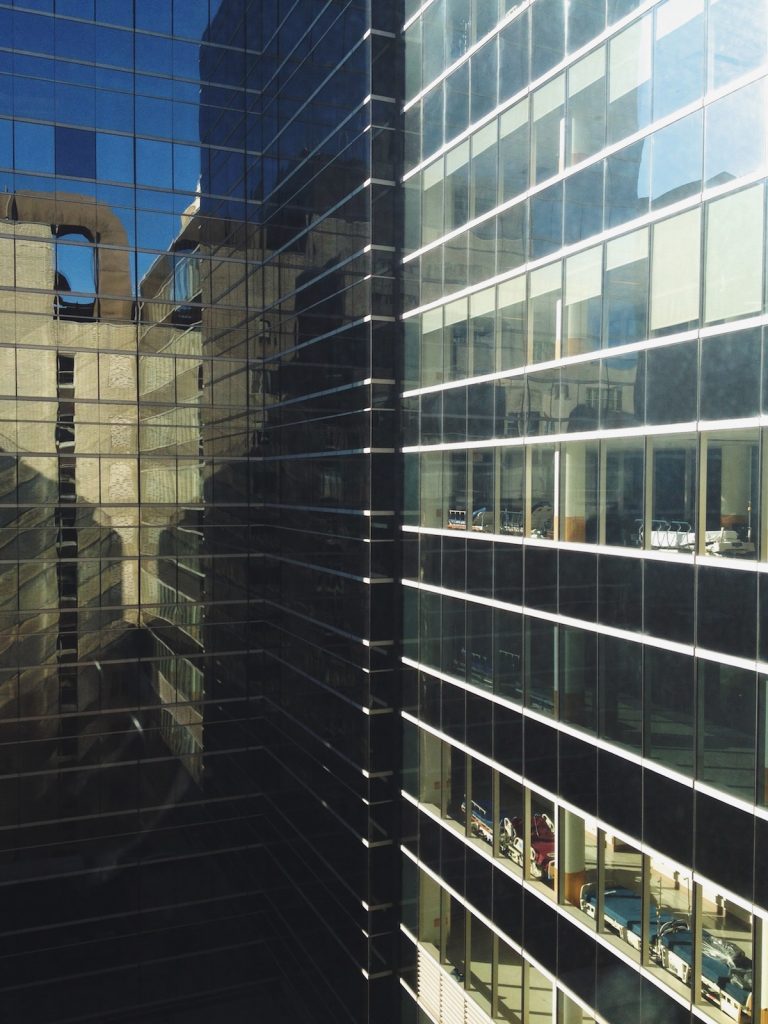 Justin Sanders trained as a family doctor and is now pursuing a career in palliative care. He has written stories for Pulse and serves as its visuals editor. Having studied art history and worked in the fine arts, he has a deep faith in their healing power. Justin and his wife live in Boston. When not tending to their four-month-old daughter, Cecily, he loves to mess up recipes from a growing cookbook collection and to read The New Yorker.

Edifice: (1) a building, especially a large, imposing one; (2) a complex system of beliefs. “As a palliative-care fellow, I often passed the window from which this photo was taken, marveling at the view. It’s a scene that captures, for me, the complexity of our healthcare system. It also reminds me of the impact of that complexity on the patients behind the mirrored facades and on those of us who work within these institutions. As a fellow, I often met … 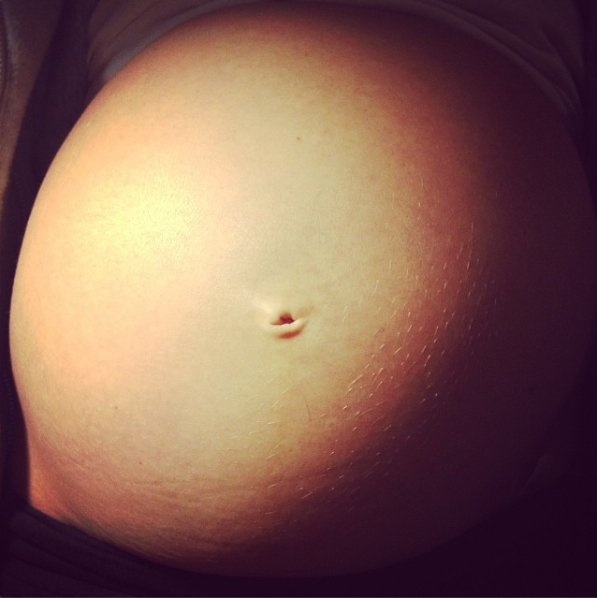 Justin Sanders trained as a family doctor and is now pursuing a career in palliative care. He and his wife live in Boston, preparing to welcome their first child into the world. Having studied art history and worked in the fine arts, he has a deep faith in their healing power. He is a Pulse author and serves as its visuals editor. When not frantically cleaning house in preparation for a baby, he loves to mess up recipes from a growing cookbook collection and to read The New Yorker.

“My wife’s pregancy has been an amazing time for us. It’s remarkable that such a common event can be one that feels so profoundly unique. Becoming pregnant took unexpected effort and time, and so excitement has been tempered throughout by worry that things will turn out okay. I took this photo at thirty-seven weeks, full term, and it reminded me of a waxing moon. As a family doctor with experience in obstetrics, one …

“It’s cooler this morning,” I said to Seema, as we left the hospital grounds en route to our home visits.

It was a bright and bustling morning in Trivandrum, the capital of India’s southwesternmost state, Kerala. A third-year resident in family medicine, I had come here to work with the staff of an Indian nonprofit devoted to advancing palliative care services across India. Seema was a young, newly qualified junior doctor who had only recently joined the organization. We were traveling with five others–our driver, two nurses and two nursing trainees–into the mountains east of Trivandrum for the day.

“We don’t really speak about the weather like you do,” Seema gently chided. “In the West you spend lots of time talking about the weather.” As I silently ceded her point, she consoled me: “I think you have more variety to your weather. Here it is only hot, very hot, or cold and rainy. Most people carry an umbrella because it’s useful in any of those cases.”

I counted the passing umbrellas as our van carried us into the foothills on our way to Palode, a village where we would hold a small outpatient clinic before making home visits.

A Passage in India Read More »

It looked like the skin of an orange–peau d’orange, in medspeak. My fellow interns and I had heard about it in medical school; some had even seen it before. As our attending physician undraped Mrs. Durante’s breast one sunny morning during our first month as interns, we knew that what we were seeing was bad.

Mrs. Durante wore a hospital gown and a brightly colored head scarf. She looked like a child lying in the bed: small, delicate, demure. Her face was pretty, her voice soft and deep. By contrast, the mass rounding out the side of her right breast bulged aggressively. It was firm to the touch, reddish against her olive skin. When asked, she said it hurt.

Timidly, we interns explored its edges with gentle, over-extended fingers. In Mrs. Durante’s armpit we felt a nest of firm nodules–lymph nodes nurtured on a diet of cells growing out of control.

Cancer often hides. Here it was thriving in plain sight. To my surprise, Mrs. Durante had an air of calm detachment, as if the breast we were examining belonged to someone else, as if the pain were not her own.

What became evident that morning was not …