In my third year of medical school, I started a rotation at the nearby VA hospital. Walking toward the polished glass doors that morning, I saw my reflection–clean white coat, assured expression to cover up how lost I felt. It was my second clinical rotation ever, and my first time at the VA.

I found my team and soon met a patient I’d be seeing for the next month. His name was Jim. He’d already been hospitalized for a week–and he wasn’t leaving any time soon.

At seventy, Jim had no muscle or fat on his body. His gray skin hung like a sheet over the ridges of his skeleton, and his bony arms were covered with tiny puncture holes from years of injectable drugs.

Despite Jim’s weakness, he clearly didn’t want to be hospitalized. Each morning, he’d frown at me through bloodshot eyes and snarl, “When the hell are you gonna let me leave?” 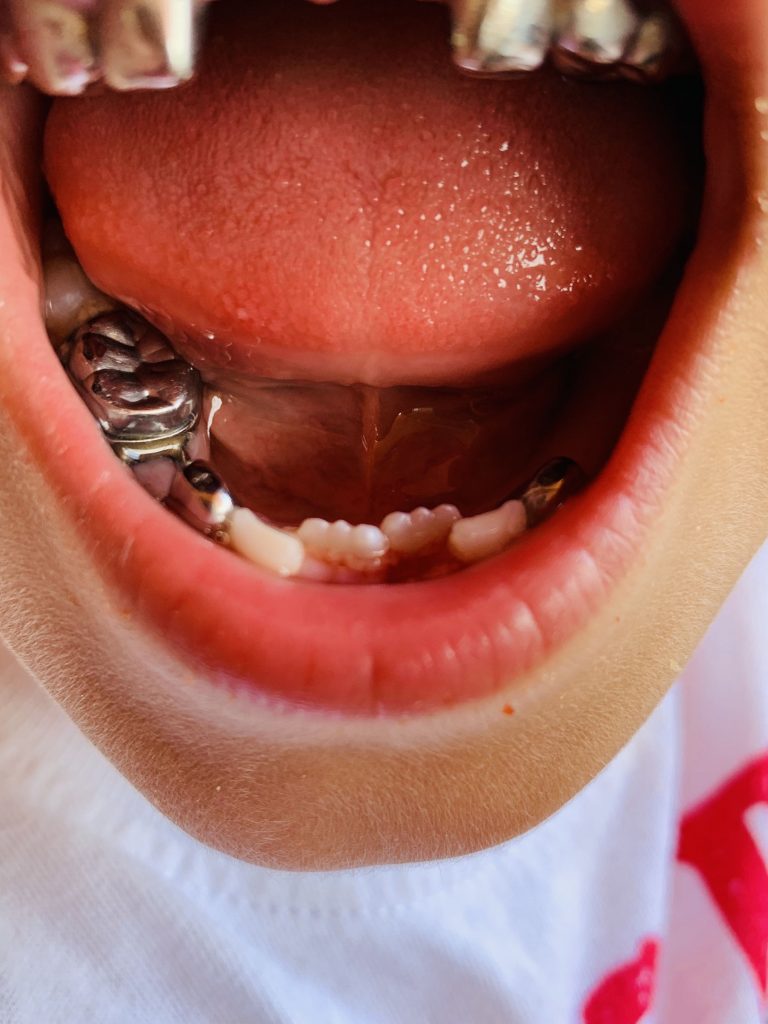 “This picture was taken seconds after the loss of a baby tooth, one of the lower central incisors, now being replaced by a permanent tooth. It’s a good reminder that dental health is an important aspect of a child’s general health. One in four five-year-old children have tooth decay that affects, on average, three to four teeth. The majority of tooth decay goes untreated and impacts the overall well-being of both child and family.”

No power-down switch to arrest
That incessant activity of the mind and senses
Not even for our wedding anniversary
Getaway.

At the airport my eyes reflexively dart
From the cashier’s cheery smile to fix on her arm
Laid bare by her Dunkin’ Donuts uniform
And the glaring track-mark trail
As she carefully hands me my scalding hot coffee.

On board American Airlines my ears instinctively pinpoint
That paroxysmal brassy cough of the man in seat 20C
Debating whether it could be pertussis. 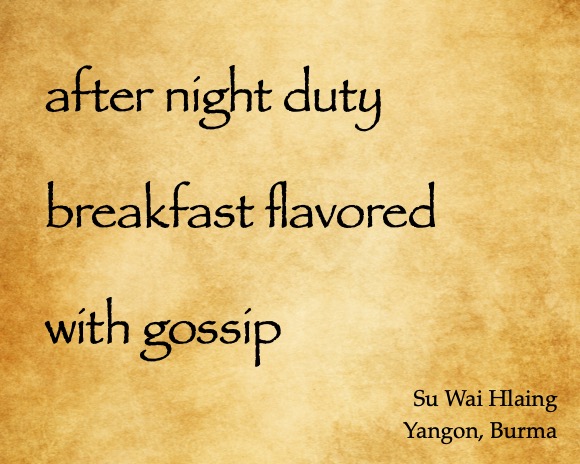 Two maxims come to mind when I think about parenting, maybe because I was pretty lucky until the teen years.

In the early years, I didn’t need maxims. As a single parent, I needed support and friendship, child care, a good job, health insurance, and a bit of luck–all of which we had as a family.

I was a third-year medical student, doing my internal-medicine rotation in a large regional teaching hospital.

“We have a new admit that I want you to pick up,” my team’s senior resident told me on my third day. “Mr. Ngo is a seventy-one-year-old man with congestive heart failure. He came into the ER with worsening shortness of breath and edema.”

I read Mr. Ngo’s chart and went to his hospital room. He sat on the edge of his bed, his labored breathing obvious even from the doorway. 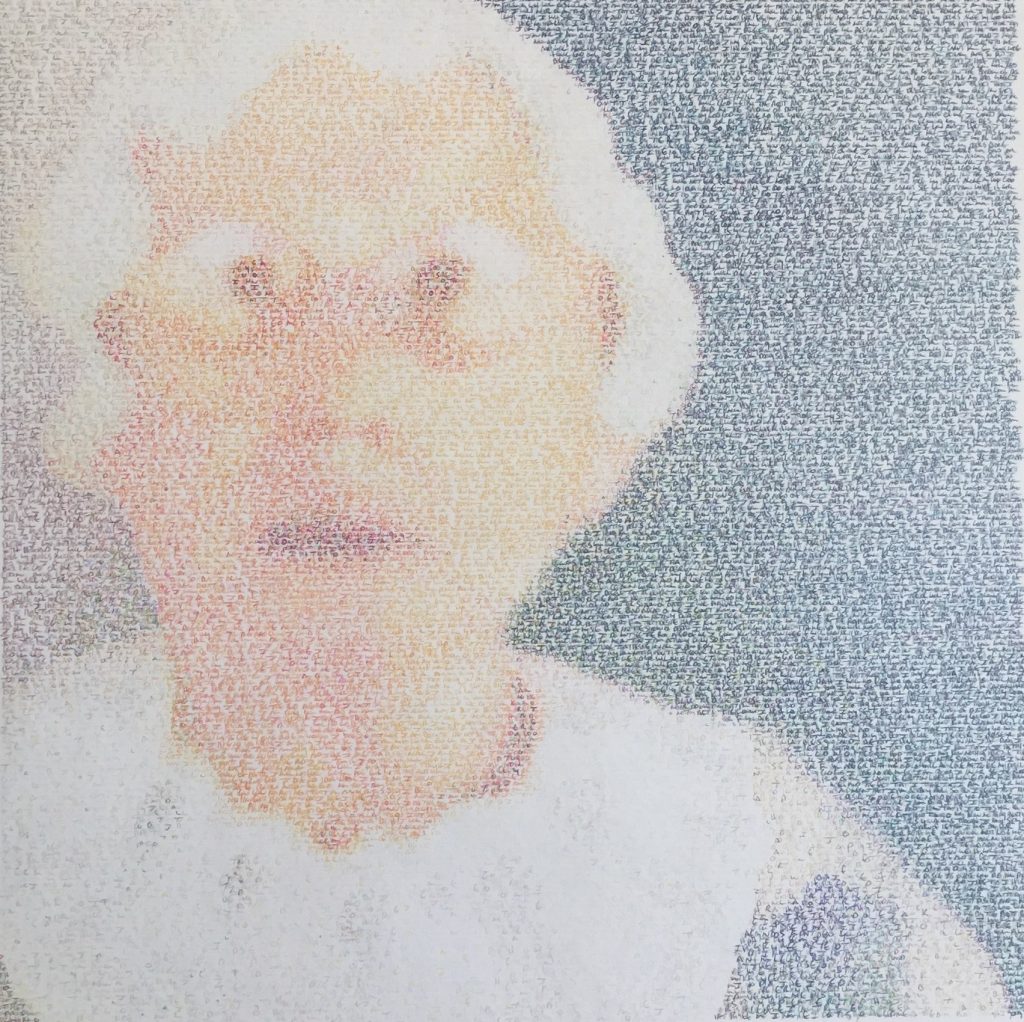 Robert Bern is an artist and healthcare IT professional living in New Mexico. His artwork tells the story of illness and death in our culture by sharing the sometimes tender, tragic and complicated stories of those who have had experience with illness and dying.

“This artwork is a portrait of my mother who died in 2012. It is 4 ft x 4 ft and is made from my handwritten text of a poem she loved. The work and its mode of creation is an exploration of my mother’s and my own relationship to death, as well as of our relationship to each other.“

My first memory is of me asking my mother about the man trapped behind the glass of the picture frame that lived amongst the gods in my grandmother’s temple. I learned that he was my grandfather, and that he stopped breathing to go to a better place. I didn’t understand why he didn’t love my grandmother enough to take her along.
As a single parent most my children’s lives, my identity fixated on motherhood. I managed their successes, failure, moods and challenges. I was at the helm of our ship.
As they entered their teens, they described my steering as “stupid.” So, I shifted from captain to astronomer, helping them navigate by reading the stars. Taking a backseat was uncomfortable, and I bit my tongue (a lot!), rather than elicit another battle. I surrounded them with trustworthy adults, recognizing the same advice uttered from a different adult became morsels of wisdom in their eyes. As an astronomer, I had subtle influence helping them notice signs that could lead away from entropy and towards marvelous constellations instead.

1. Bipolar disorder
2. History of postpartum psychosis
3. No custody of her children
4. In treatment for cocaine abuse
5. Regular smoker

I digest each of these facts on the computer screen in rapid succession, progressively cementing the picture of Renee Pryce, a twenty-eight-year-old woman in her final months of pregnancy.

I’m a first-year resident in a large urban county hospital. In the course of my training, I’ve learned that some people (mostly older doctors) find the electronic medical record (EMR) burdensome and inefficient. 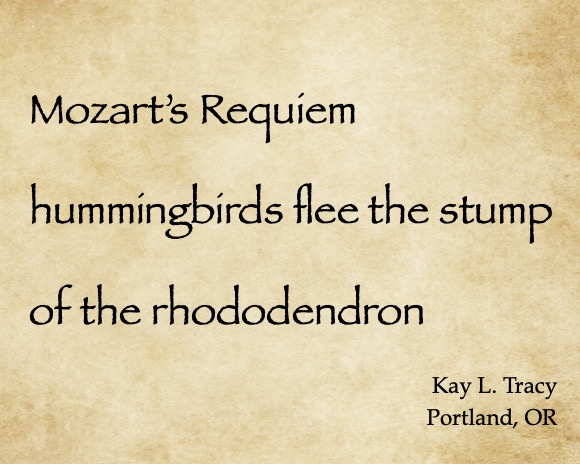 Cradling this two-month-old baby boy in my arms, stroking his face, savoring the infant skin.

Wait, what is that? A gap, something in his jawline?

My heart races. I run my fingers gently over that same spot, the one that worries me, this time using my palpating finger more intentionally.